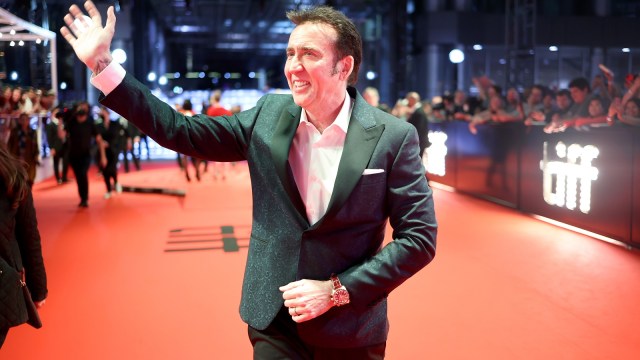 If there’s one thing the world truly deserves that it hasn’t gotten yet, it’s Nicolas Cage chowing down on the scenery as an over-the-top comic book villain. As one of Hollywood’s most famed aficionados of the medium, the Academy Award winner has appeared in his fair share of superhero projects, but who wouldn’t love to see him go for broke and break bad?

Earlier this year, the resurgent Pig and The Unbearable Weight of Massive Talent icon revealed that he’d love nothing more than to play obscure Batman villain Egghead, who was wondrously brought to life by Vincent Price in Adam West’s classic 1960s TV series. During his recent appearance on the Happy Sad Confused Podcast, Cage once again underlined his desires to play the part, and even offered a vague explanation as to why.

“You know what I mean it’s like, Egghead is Vincent Price right? He’s one of our other great American superstar actors that I revere and had so much fun watching growing up. Theater of Blood. So I was watching the Batman show, because I really wanted to see what Vincent Price was going to do. And the character’s hilarious. I mean, everything starts with “Egg-cellent.” And it’s, “Egg-static.” But I’m not calling Warner Bros.. This is just more of a fun little thing. Because I’m on a red carpet, somebody asks me a question, I want to give them a funny answer. But there is an approach to that character that could be terrifying. And I’ve thought a lot about it. I’m not going to share it with you.”

This is the dude who revealed he drew inspiration from Michael Jordan and Marlon Brando to headline a period-set Western, and is gearing up to play Dracula in black comedy Renfield, so we know to expect the unexpected from Cage and his career choices. The prospect of seeing him as a Batman baddie is mouthwatering to say the least, even though we’re fairly convinced he wouldn’t fit in with either Matt Reeves’ grounded Robert Pattinson universe, or even Ben Affleck’s darkest of Dark Knights.

Still, if we could will it into existence, we’d be guaranteed a showstopping turn the likes of which the genre has never seen before. Warner Bros. Discovery, are you listening?