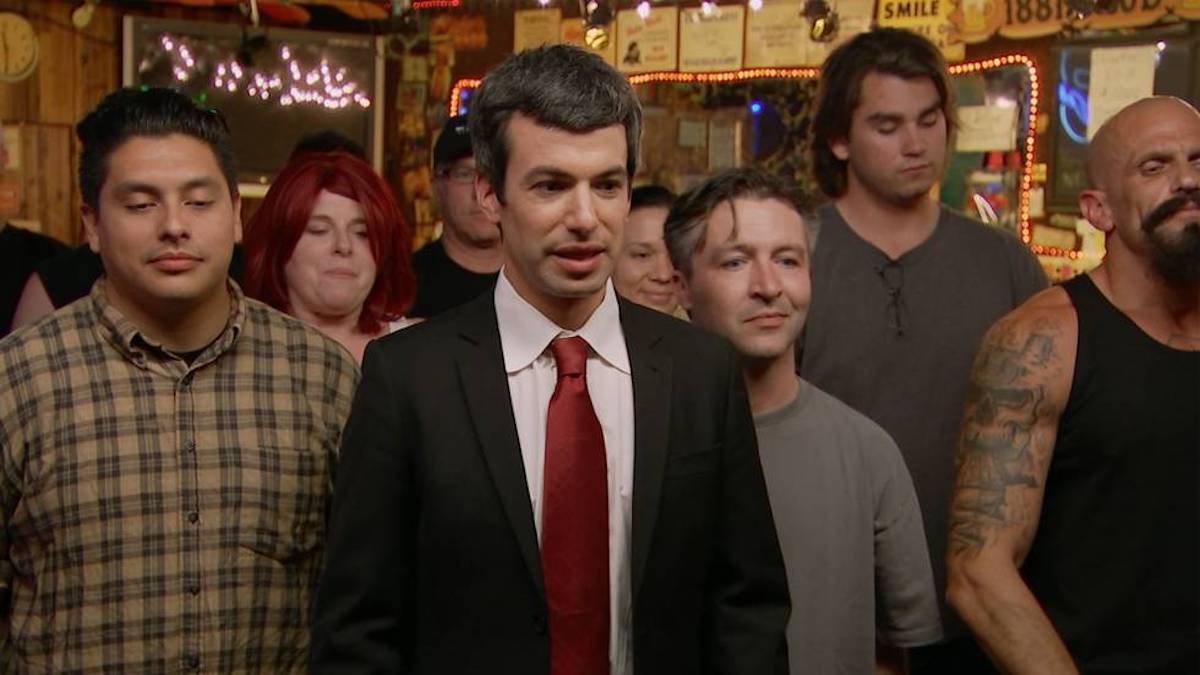 If you’re a fan of The Rehearsal and find yourself impatiently waiting for the HBO series’ second season, Nathan For You is must-see television. It’s a part-reality show, part-absurdist comedy that ran from 2013-2017 and starred Nathan Fielder playing the same fictionalized, socially awkward version of himself as in The Rehearsal.

Iinstead of helping people prepare for anxiety-inducing conversations and life events, Nathan imparts his knowledge gained from graduating at “one of Canada’s top business schools with really good grades” to assist struggling business owners. As a mischievous interpretation of business repair shows like Gordon Ramsay’s Kitchen Nightmares, each episode involves Nathan suggesting unconventional business strategies that border on the edge of legality, often to equally humorous and cringey results.

In Nathan For You, anything goes from poop-flavored frozen yogurt to rebranding a coffee shop “Dumb Starbucks”. You’ll find some episodes here that seem to lay the groundwork for what would eventually become The Rehearsal, recreating scenarios and blurring the line between reality and simulation.

We’ve taken the opportunity to rank the top ten episodes of the series. Be warned, however, there are spoilers ahead. If you’re new to the show, view our list as suggestions for what episodes to catch first.

“Private Investigator/Taxi Company” features Brian Wolfe, the titular private investigator who Nathan ‘befriends’. While Brian believes he’s the best PI in Los Angeles, Nathan questions him about his lack of Yelp reviews. To earn a 5-star review, Nathan puts Brian to the test, sending a group of look-alikes around the neighborhood to complicate his work. When Nathan asks Brian to hang out afterwards, he rebuffs him and hilariously calls him the “Wizard of Loneliness,” feeding into Nathan’s social anxiety and self-doubt.

The second half of the episode sees Nathan trying to help a local taxi company by giving riders the option to choose from four different conversation topics. They can also opt to avoid talking altogether. It’s a surprisingly sound business idea, but of course Nathan doesn’t allow the driver to pick his own subjects, instead pressuring him into a conversation about marine biology with a patron. What could go wrong?

Instead of helping other businesses, this time Nathan sets out to improve himself through immersion therapy. He creates “The Hunk”, a fake dating show similar to The Bachelor, to improve his confidence around women. He obviously doesn’t get any better, and instead butts heads with the show’s host. Featured are several moments for cringe-lovers, from Nathan awkwardly backing away from a kiss to hearing one of his date’s deepest, darkest secrets.

In the other half of the episode, Nathan makes the world’s scariest haunted house with the goal of getting sued for emotional distress by tricking the patrons into believing they contracted a deadly disease. The plan includes being rushed into an ambulance and a realisitc quarantine, which has taken on new meaning in the COVID-19 pandemic world.

In 2017, Nathan told a story on Jimmy Kimmel Live! about a suitcase mix-up almost ending in his arrest. This episode reveals that the story was fabricated, although all the events did technically happen. In “The Anecdote,” Nathan has social anxiety after being booked on the talk show, leading him to go to extreme lengths (spending $350,000) to devise an interesting story.

The anecdote entails him flying to a wedding, accidentally taking another person’s suitcase, wearing the suitcase owner’s oversized suit, and getting caught by the police with the suitcase owner’s bag of unidentified powder. The payoff comes with Nathan finding that the substance is actually the ashes of the suitcase owner’s mother. It’s a brilliantly executed plan that most importantly, doesn’t require Nathan to lie on live television.

To help a struggling coffee shop owner, Nathan abuses another legal loophole by replicating Starbucks’ branding and claiming its use as parody. This is probably the most famous episode of Nathan For You with the coffee shop, now named “Dumb Starbucks,” receiving international news coverage. The media spins the story into a sort of commentary on consumerism with some customers insisting that the street artist Banksy was behind the project.

As the opener for the third season, “Electronics Store” is a combination of everything that makes Nathan For You great. There’s Nathan’s ‘evil’ side, which attempts to exploit Best Buy’s price match policy by getting the owner, Alan Karikian, to advertise his TVs at $1. There are, however, conditions for this purchase: customers are required to wear a full tuxedo; then they must crawl through a tiny door where they are met with a live alligator. The humor comes from how far Nathan is willing to go for his plan, including taking Alan to a therapist to get him diagnosed for insanity and setting up a dating show to get dirt on Best Buy.

To compete with other Hollywood tourism stores, Nathan stages a film production inside the struggling souvenir shop, L.A. Fame. To take his plan even further, he hires a Johnny Depp impersonator to deceive people into thinking it’s a star-studded blockbuster. Attracting a crowd, he recruits some of them to act in the film as customers who spend large amounts of money buying items from the shop. Nathan’s plan, however, spirals out of control as he faces legal trouble for fraud. He develops another scheme to save his first by actually making the movie with the footage he shot at the shop. “Souvenir Shop/E.L.A.I.F.F.” is one of the craziest episodes of Nathan For You, where Nathan must keep coming up with new tricks to cover his previous ones.

“The Movement” showcases yet another one of Nathan’s business ideas that escalates to something much larger than intended. Here, Nathan helps a moving company reduce the cost of hiring employees by convincing people to do the work for free. The plan? Make moving the next fitness trend. Nathan enlists the help of two fascinating characters: Jack Garbarino, a man who becomes the model and branding for the workout; and Austin Bowers, a ghostwriter who creates Garbarino’s book and life story. The episode also features another appearance by the private investigator, Brian Wolfe, with a humorous reveal about his earlier years.

This episode features Nathan helping a dive bar attract more customers by allowing people to smoke in the building. He’s able to pull this off through a legal loophole that allows people to smoke indoors if they are acting in a stage production. He puts on a slice-of-life play where a small audience is invited to watch customers smoke and drink at the bar as actors. It’s even taken a step further when Nathan hires actors to play out the exact events of the opening night.

This is one of the series’ most meta episodes, as it ponders why Nathan is motivated to go to such extreme lengths to achieve his goals. The episode also contains one of the series’ best scenes where Nathan conducts an exercise with an actor (Victoria Hogan) portraying a romantic conversation at the bar where he directs her to tell him “I love you” repeatedly while looking into his eyes. The moment may make you uncomfortable, but it’s somehow emotionally moving despite its artificiality.

“Finding Frances” is the 84-minute series finale that sees Nathan assist Bill Heath, the Bill Gates impersonator in “Souvenir Shop/E.L.A.I.F.F.”, find his long lost-love Frances. Almost like a test pilot for The Rehearsal, Nathan hires an actor so that Bill can practice his reunion. For once the rehearsal actually seems to work by helping Bill discover what he’s really searching for on his trip.

While this episode has laughs along the way, there’s a feeling that searching for Frances with Heath is a surprising self-reflective journey for Nathan that explores ideas of love, connection, and the passage of time. “Finding Frances” again asks the question of whether the entire enterprise was “real” or “fake” through an escort named Maci, leaving Nathan’s character at an inconclusive end, but its main strength is the potency of emotion it achieves, something greater than any other episode of the series.

Nathan attempts to help a gas station appeal to more customers by offering the lowest prices but with a catch: it’s only after rebate. To receive the rebate, customers must hike up a mountain and camp overnight all while answering a series of riddles. In other words, it’s impossible, but the customers come to realize that the real rebate was the friends they made along the way. It’s one of Nathan’s most creative schemes that somehow doesn’t end with a bunch of people angry at him.

So why is this our top pick? It contains all the hallmarks of the best episodes of Nathan For You: a humorous concept, outlandish characters, and a devious Nathan. An extra gift occurs at the end where the gas station owner tells Nathan to drink the pee of any young child when he is scared or needs help. With a face of incredulity, Nathan genuinely breaks character and can’t help but laugh.

You can catch all four seasons of Nathan for You on HBO Max, Hulu, and Paramount+.