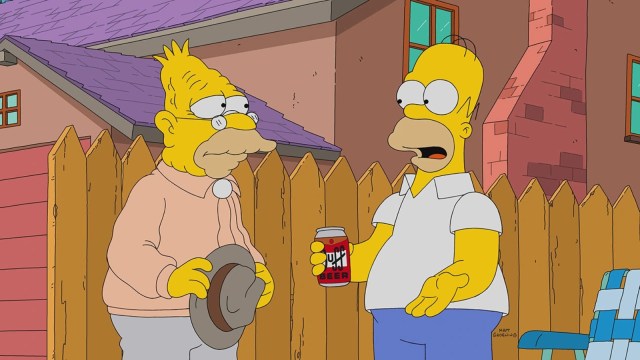 Don’t lie. We’ve all searched up a fictional brand at some stage in our lives, scouring the internet in search of like-minded companies took inspiration from (and profited from) their heightened popularity and name value. Either that, or we really thought these places existed — and there’s no shame in being hopeful — but harsh reality hit us like a ton of bricks and that bubble burst. Plus, if no one ever searched up “Krusty Krab” in their entire lives, then “no one” is lying to themselves. And so, for the glorious eons that Hollywood cinema has thrived, fictional establishments — restaurants, eateries, offices and breweries — have made a nice home in the minds of viewers, so much so that UK citizens felt the inescapable urge to conduct a quick, satisfying Google search — just in case. There’s still no Krusty Krab, at least not one owned by the incomparable entrepreneur Mr. Krabs and at odds with the Chum Bucket every other Thursday, so it doesn’t really count, does it?

It doesn’t take a genius — nor a countrywide study — to lay down the results that most of us could have hypothesized. Think about the most influential movies, TV shows, video games and literary works and the most iconic buildings, brands and businesses will soon spring to mind. The illuminating study — conducted by document management company SmallPDF — analyzed Google UK and worldwide data to find the 19 most popular fictional companies, then ranked them according to the average monthly Google searches. Anyone reading this article is found guilty of contributing to at least one — if not several — of these entries. No objections. We’ve all done it.

So, if these establishments were real, which would be deemed the most profitable based on search histories alone?

SmallPDF would also like to note the following: *Some fictional businesses such as Monsters Inc. and Bubba Gump were not considered in the study as these names correspond to film names or companies that really exist, and including them would compromise the accuracy of the study.

We won’t sit here and reel off all 19 entries, but we’ll tackle the most-searched, best out of five.

Making moves in the late-’80s American sitcom The Simpsons, Duff Beer is the UK’s fifth most Googled fictional business as a n established beer brand enjoyed by Homer Simpson and several other Springfieldians (it’s a thing). With an average of 3,100 Google searches in the UK and 32,000 globally, Duff Beer isn’t only Homer’s most beloved drink, but also that of several Brits, Scots and Irish. Honestly, this finding just makes the UK look like a bunch of alcoholics. D’oh!

Oh, har-har. Did someone say “Krusty Krab” three times? Popularized by the children’s TV series with unfathomable acclaim, Spongebob Squarepants, the Krusty Krab is the home of the infamous Krabby Patty, located in Bikini Bottom and owned by restauranteur and tycoon Mr. Krabs. Employees Squidward and Spongebob are all hands on-deck at all times to reel in a handsome profit for their greedy, overbearing boss. With an average of 3,900 monthly Google searches in the US alone and then 86,000 searches world-wide, it’s plain to see that Krusty Krab pizza is the pizza for you and me.

So no one told you life was gonna be this way. Your job’s a joke, you’re broke, your love life’s D.O.A. Well, luckily, Manhattan, NYC is home to Central Perk, a coffeehouse made famous by the American sitcom Friends. Central Perk happens to be the prime rendezvous spot for Rachel, Phoebe, Ross, Chandler, Monica and Joey to meet, greet, ingest some caffeine and spill the beans about their drama-filled lives. With an average of 5,200 Google searches in the US, and 75,000 worldwide, Central Perk is the desired hang-out when it hasn’t been your day, your week, your month, or even your year.

Are there any cameras around? Are we contestants on a hidden-camera reality show? Nope. We’re just wishing we could work with Michael Scott at the Pennsylvanian branch of Dunder Mifflin Paper Company — and we’re not alone, either. Showing an average of 5,500 Google searches in the UK and 92,000 globally, the fictional office supplies wholesale company Dunder Mifflin Paper Company Inc. from American mockumentary sitcom The Office clearly manufactures some must-have ballpoint pens. Interestingly, Dunder Mifflin was originally entirely fictitious, that was until Staples and similar outlets started selling products under the same brand. That’s almost an Office-worthy moment. If you know, you know.

Vegetarians look away. When it came about that American crime-drama Breaking Bad would smash a Guinness World Record in 2013 to become the most critically acclaimed TV show of all time, no one would have assumed that Gus Fring’s drug ring disguised as a fast-food restaurant — Los Pollos Hermanos — would become so recognizable. However, there’s no verdict on the quality of the food and we can’t say it’s “finger-lickin’ good” without risking copyright infringement. With an average search volume of 14,000 monthly searches in the UK and 187,000 searches world-wide, Los Pollos Hermanos is the most popular fictional business in the UK — and quite possibly the world. Yeah, b****! Chicken!