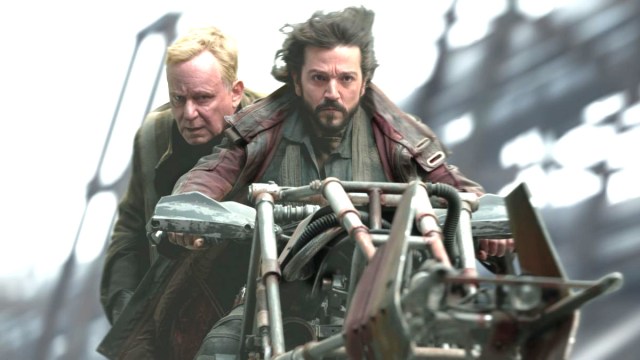 When the latest Andor trailer dropped at the top of the month, fans were blown away. After the heavy, almost cozy nostalgia of Obi-Wan Kenobi, Andor promises to be a much harder-hitting Star Wars show that eschews the familiar trappings of the sci-fi saga for a more complex, more adult exploration of what life is like under the Empire’s rule and how the Rebellion begins. In fact, though it might seem like an oxymoron, you might even say that Andor is our first ever “grounded” Star Wars story.

That’s how series star Diego Luna feels, anyway. Luna first portrayed Cassian Andor six years ago in 2016’s Rogue One, which is easily the darkest entry in the franchise that Disney has delivered, but it sounds like Andor — which serves as a prequel to that spinoff film — will only double down on what made RO such a unique and cult favorite part of the SW universe. Speaking with ScreenRant, Luna teased that the incoming show will feature some relatable, realistic themes. He explained:

“I wouldn’t say it that way. What I would say is that Andor is the most grounded Star Wars you’ll get. This is about the people. There’s no Jedi around, and it’s very dark times in the galaxy. It’s when the people have to come together, articulate a response, and work in communities because the Empire is growing and control is everywhere. People have been marginalized, and there’s no freedom. You have these communities having to react. It’s the most human that the experience of Star Wars can get. This Star Wars is about regular people like you and me, and I think that connection is going to be special. It’s the most realistic—if you can say realistic, because obviously, they live in a galaxy far, far away. But it should feel realistic to you, because we want that proximity. We want you to reflect [on] yourself with these characters on this journey.”

Not to dunk on the current Disney Plus era of Star Wars, but there’s definitely been a sense among the fandom that the franchise has been coasting somewhat of late. Everyone loves The Mandalorian, of course, but The Book of Boba Fett and certain elements of Obi-Wan were less well-received. So the fact that Andor is going to dive deeper into the “regular” world of this universe more than ever before is a thrilling prospect that is sure to excite fans.

It’s also encouraging that everyone involved in the production is clearly super-psyched to part of it, with Luna’s own invested interest in the show clear from his comments. Showrunner Tony Gilroy has also elaborated on his ideas for the series, with returning actress Genevieve O’Reilly gushing over how much she loved her character Mon Mothma’s arc. We’ll finally get to see whether Andor can live up to the hype when it premieres on Disney Plus on Sept. 21.