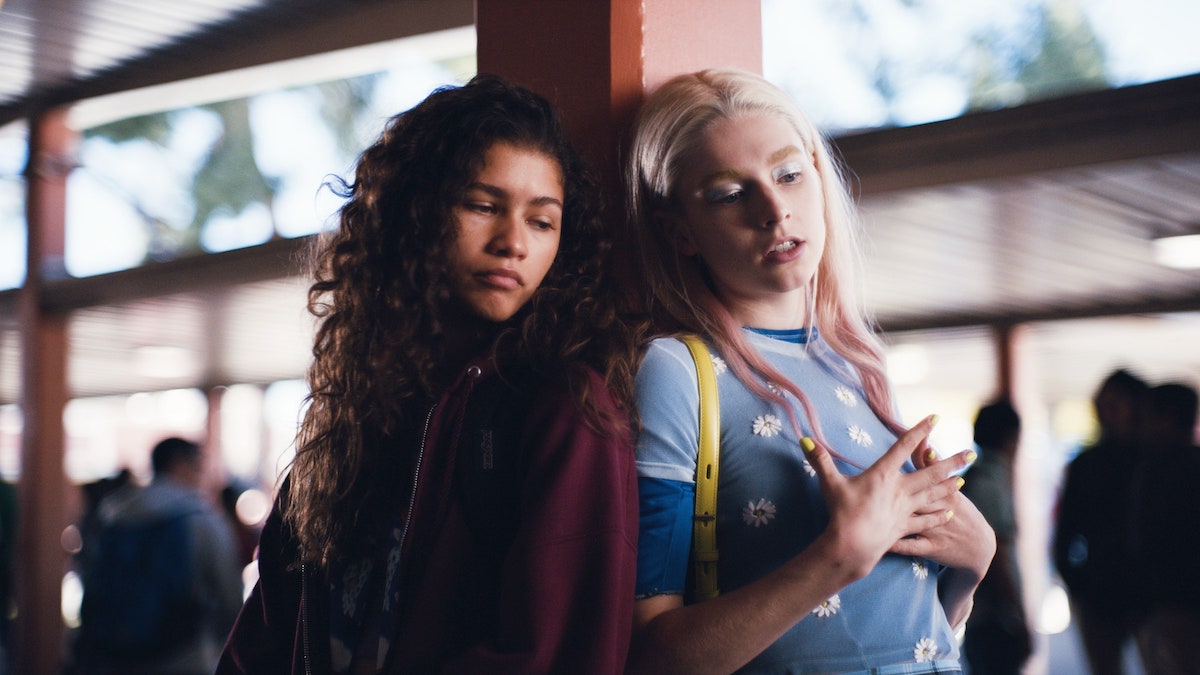 Our main character is a high schooler called Rue who struggles with substance abuse. She gets forced into rehab by her mother, but doesn’t intend to stop using upon returning home, on her return, she meets Jules (Schafer) and falls for her. The messy love triangle between Maddy, Nate, and Cassie brings a lot of the drama in the show, Maddy and Nate are a toxic on-and-off couple who shouldn’t be together, but what complicates the situation is that Cassie is Maddy’s best friend.

Here are some other shows with similar chaotic energy to Euphoria:

When watching episodes of The Secret Life of the American Teenager, there are several characters who are quite similar to the characters of Euphoria. For starters, Adrian Lee (played by Francia Raisa) is very Maddy-like since they both have feisty personalities and are willing to do whatever it takes to keep the attention of the men they want.

Grace Bowman is played by Megan Park, and much like Cassie, she’s an innocent-looking blonde who gets into a lot of trouble. Jacob Elordi plays Nate Jacobs on Euphoria, and on The Secret Life of the American Teenager, the character is quite similar to Ricky Underwood, played by Daren Kagasoff. All of these familiar character archetypes put through an entirely different context and style should satisfy any drama-hungry Euphoria fan.

The messy love triangle dynamic on Euphoria might remind fans of the original Gossip Girl of something that happened in a similar fashion. Both shows include guys named Nate, but the major difference between his characters is that the Nate in Euphoria is beyond toxic while the Nate in Gossip Girl is a sweetheart. Nate in Euphoria remorselessly hooks up with Maddy and Cassie, despite the fact that they’re best friends. Nate in Gossip Girl hooks up with Blair and Serena despite the fact that they’re best friends — but he feels extremely regretful about it. In both shows, the affairs get exposed eventually.

Degrassi is another dramatic show that has a ton of characters that remind us of the Euphoria crew.

In Degrassi, two of the main best friends of the show were Manny and Emma, played by Cassie Steele in Miriam McDonald respectively. They were blonde and brunette, just like Cassie and Maddy on Euphoria! Interestingly enough, just like Cassie and Maddy, Manny and Emma also dealt with their fair share of drama as high school students. Some of their drama had to do with the guys on campus that they liked. Both of these shows display underage drinking, substance abuse, and sexual activity.

Skins is probably one of the raunchiest shows on this list… and that’s why it’s easily comparable to Euphoria. There are two versions of Skins to consider, one from the US and one from the UK.

Right now, we’re referring to the generally-preferred version from the UK, but both Skins series are worth watching. Important subjects like mental illness, substance abuse, and more are touched upon in both of these shows. Since they’re filled with so many heavy-hitting topics, they’ve both been labelled as controversial by the media and probably aren’t meant for a young audience.

Although Riverdale catches a lot of backlash from critics for being a cringe-worthy show, it still has a devoted and dedicated fan base of viewers who are totally obsessed with it. The cast of Riverdale consists of Lili Reinhart as Betty Cooper, Cole Sprouse as Jughead Jones, KJ Apa as Archie Andrews, Camila Mendes as Veronica Lodge, and Madelaine Petsch as Cheryl Blossom.

Riverdale premiered in 2017 and has gone on for six seasons so far. It’s filled with a lot of dark drama, very similar to the darkness of Euphoria. Riverdale isn’t anywhere near as edgy, but it’s still jampacked with tons of tragedy, mystery, and intrigue.

Anyone who watched The Fosters probably got addicted to Good Trouble right away, since it’s a spinoff to The Fosters. Originally, The Fosters focuses on teenagers who are constantly getting into trouble after getting adopted out of the foster system. Good Trouble follows two of those teenagers as they become young adults and enter the workforce.

Living with roommates in their early 20s, dealing with challenging romantic dynamics, sexism in the workplace, and the typical stresses of life take up most of their time and attention. There are a lot of similar vibes between Good Trouble and Euphoria, but it’s important to note that Good Trouble isn’t anywhere near as chaotic. The cast of Good Trouble consists of Cierra Ramirez as Marianna, Maia Mitchell as Callie, Sherry Cola as Alice, Emma Hunton as Davia, and Tommy Martinez as Gael.

There are several reasons why 13 Reasons Why has been labelled controversial and problematic. In plenty of episodes, viewers can agree that the creators probably took things a little too far. The show focuses on a teenage girl named Hannah Baker who dies by suicide after dealing with bullying, loneliness, and sexual assault. The students at her school are also pretty complicated people, engaging in underage substance use, terrible gossiping, and covering up crimes for each other.

The crime that happens in 13 Reasons Why gets so bad, they end up having to go to court! There’s also a ton of less than legal activity that takes place in Euphoria. Some of the memorable cast members from 13 Reasons Why include Dylan Minnette as Clay Jensen, Alisha Boe as Jessica Davis, Katherine Langford as Hannah Baker, and Christian Navarro as Tony Padilla.

One of the biggest commonalities between Pretty Little Liars and Euphoria is the subject of blackmail. In PLL, four teenage girls are being blackmailed with their secrets. These hidden truths vary from person to person, from sexuality to affairs. Someone knows they’re keeping secrets and uses those secrets as blackmail to manipulate the girls in scary ways.

In Euphoria, Jules is blackmailed and manipulated with her nude photos in order to get his way. The use of blackmail is heavily prevalent in both of these dramatic shows. The memorable actresses from Pretty Little Liars are Lucy Hale as Aria Montgomery, Shay Mitchell as Emily Fields, Ashley Benson as Hanna Marin, Trion Bellisario as Spencer Hastings, and Sasha Pieterse as Allison DeLaurentis.

Fans of Cruel Summer can rest easy knowing that Season 2 of the show is coming in 2022. Jessica Biel is the executive producer on the show and she confirmed that new episodes will be released sometime soon! Cruel Summer parallels Euphoria as both shows shed light on teenagers keeping dark secrets. In this dramatic series, one of the main characters gets kidnapped by her high school principal and locked up in his basement.

The final episode of Season 1 ended with a shocking revelation that made fans eager to finally see a second season come to fruition. Hopefully, Season 2 is just as intense as Season 1. If so, it’s definitely comparable to Euphoria due to how utterly wild the plot is.

90210 is a show that gives viewers a sense into what life is like for the wealthiest high school students in the Beverly Hills area. There are some major differences between 90210 and Euphoria, but the teens in the latter programme aren’t nearly as affluent.

What these two shows have in common is the fact that the high school students deal with a handful of similar issues. In 90210, Annie Wilson is the new girl on campus, played by Shenae Grimes. She tries to fit in with her rich classmates, but constantly feels like she is an outcast. In an attempt to feel like she belongs, she ends up making some major mistakes. In Euphoria, Rue isn’t necessarily new on campus, but she’s returning from a stint in rehab and trying to blend in on campus just the same.