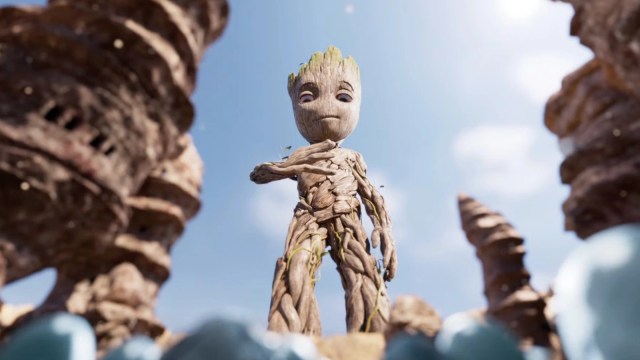 The newest project in the Marvel Cinematic Universe is the shortest one yet, with I Am Groot dropping on Disney Plus. I Am Groot is a series of animated shorts, recently revealed to be canon by Marvel, although James Gunn does not quite agree. The shorts follow everyone’s favorite member of the Guardians of the Galaxy, Groot.

The shorts should take place sometime between Guardians of the Galaxy and Avengers: Infinity War, as it isn’ a teenage Groot in the shorts, but a little baby Groot. The shorts are – you guessed it – quite short, and like Baby Groot’s involvement in the first two Guardians of the Galaxy films, they are overloaded with cuteness. With that being said, let’s take a look at the five shorts, and rank them by how cute they are. But before we do, we need to shout out that Groot fast-forwards the Marvel Studios logo at the beginning of each short, which is the cutest way to solve a practical problem.

The first short on this list taking the number five spot is ‘The Little Guy.’ ‘The Little Guy’ sees Baby Groot encounter a very small alien race. At first, the aliens attack Groot, probably mistaking him for a predator. Eventually, Groot wins them over by farting out a leaf, feeding all of them. Unfortunately for them, Groot does not pay attention to where he steps and he manages to crush them all, or at least he thinks he does. This short has some cute moments with Groot being knocked out of a treehouse right before it gets destroyed, resulting in a very cute temper tantrum. His interactions with the alien race were cute too, but ‘The Little Guy’ still falls… short.

‘Groot’s First Steps’ is the fourth cutest short in I Am Groot. ‘Groot’s First Steps’ showed what happened to Baby Groot after Guardians of the Galaxy, as he eats and grows his way out of his little pot. Groot is accosted by two robots who seem to be in charge of plant upkeep, and he is placed in another section out of the light.

Groot attempts to keep himself warm with a rag until it’s stolen by the robots, who throw it on a bonsai tree. After getting tangled up by stretching his arms, he eventually makes it over to the tree before falling to the floor. The fall breaks his pot and Groot discovers he has grown his legs. Taking his first steps, finding his footing, and running around is one of the cutest moments of this series.

‘Groot’s Pursuit’ comes in as the third cutest short in I Am Groot. This short is as close to a horror short as the series gets, with Groot being frightened because he hears noises in the Quadrant, the Ravager ship where he lives. At the start of the short, Groot drops his glass after jumping from a sound. Afterwards, he then goes to the bathroom and reads a magazine on the toilet. When he leaves, some paper gets stuck to his foot.

Groot then gets confused and frustrated by an alien version of a Russian nesting doll, which was very cute. To try and find the source of the noise, Groot straps a wristwatch to his head, which is voiced by James Gunn. He finally finds the source of the noise, and it is an alien who has shape-shifting abilities. The cuteness overload is when it takes the form of Groot and the pair have a dance-off. But when the shapeshifter mockingly said “I am Groot,” in response to Groot’s trademark greeting, Groot danced him all the way to the ship’s airlock.

‘Groot Takes a Bath’ might be the most straightforward short in the I Am Groot series, but it is also the second cutest on this list. It starts off with Groot finding a tiny hot spring and testing the waters. What follows is essentially Groot taking a bath, as if he was a member of a very exclusive spa. He wipes mud over his body and places cucumber-like slices over his eyes before triumphantly yelling, “I am Groot!”

After he stays in the water for a little too long, one big bush covers his entire body, forcing him to waddle away in the cutest way. But when he sees his reflection, he realizes he has an opportunity to give himself a makeover and he snips away at his leaves in a montage that resembles a typical trip to the hairdressers. As he goes to reapply the mud onto his body to regrow his leaves, a local alien animal takes umbrage with the noise he’s making and attacks him. When Groot returns to apply more mud, he finds that the spring has dried up, but fortunately, the alien has a nice colorful feathered tail, so after some impromptu murder, Groot walks away from his spa totally content and very fashionable.

Taking the award for the cutest I Am Groot animated short is ‘Magnum Opus.’ The short consists of Baby Groot running around the Quadrant, acquiring a number of items including glue, soap, and some of Rocket Raccoon’s tail. Rocket catches him after he has paraded around the ship and at first, he’s mad at Groot, but after Baby Groot shows Rocket that he was working on a drawing of his ‘family,’ the Guardians of the Galaxy, Rocket simmers down.

If you didn’t shed a tear out of sheer overwhelming cuteness when Rocket picked up the picture of the Guardians, maybe this series wasn’t for you. Rocket is even wearing ‘old dad’ style spectacles that are way too small for his head. Sure, Groot blew up some of the ship in the process, but how much cuter could you get?

Not only did Marvel not waste time by making these animated shorts for Disney Plus, but I Am Groot should get an equally cute second season. Sure, it might have only taken 15 minutes or so to watch, but seeing Rocket with the ‘old dad’ glasses and Groot dancing with a shapeshifting version of himself made it totally worth it.

Catch I Am Groot on Disney Plus now.