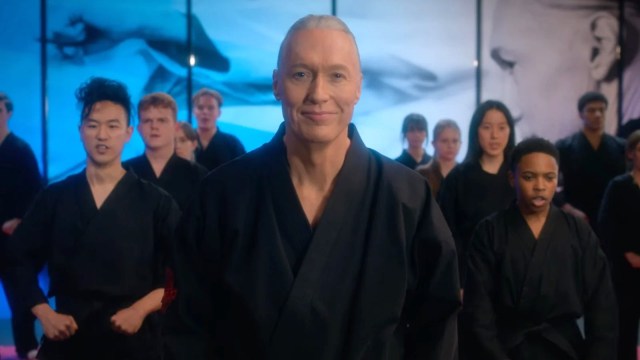 In the age of revivals and reboots that we live in, one of the most successful has to be Cobra Kai, the Netflix — formerly YouTube Red — smash-hit that managed to retool the fondly remembered, but not all that relevant, Karate Kid movie series from the 1980s into a cross-generational streaming sensation.

A big part of the show’s success is thanks to the way it caters to both new fans, through the storylines of its teenage characters, and those that grew up with the original Karate Kid trilogy, as numerous familiar faces from those films have been brought back into the so-called “Miyagiverse” across Cobra Kai‘s four seasons to date. So far the less popular ’90s spinoff, The Next Karate Kid, hasn’t been referenced, but Hilary Swank showing up seems like an inevitability at this point.

But while there’s no news on Swank’s return just yet, the incoming fifth season will revive another character not seen for decades, someone who promises to cause a lot of trouble for our heroes. With season five debuting this fall, here’s an up-to-date guide on every single Karate Kid alum to appear in Cobra Kai to date.

Daniel LaRusso was the protagonist of the first three Karate Kid movies, going from the underdog contender to two-time All-Valley Karate Tournament champion. In Cobra Kai, Daniel is now the owner of a successful car dealership and only returns to karate once his old foe Johnny restarts Cobra Kai. The two have since come to an understanding, although Miyagi-Do is technically no more after they lost at the latest tournament.

Although he was Daniel’s tormentor and tournament rival in The Karate Kid, Johnny is essentially the main character of Cobra Kai, which reveals that his life has gone down the toilet ever since. Across the series, however, Johnny sorts himself out, becomes a sensei (currently running his own dojo, Eagle Fang), and takes surrogate son Miguel under his wing. He also finally reconciled with his biological son, Robby, at the end of season four.

Randee Heller originally appeared as Daniel’s hard-working single mom Lucille in The Karate Kid before reappearing in Part III. She’s so far turned up in three episodes of Cobra Kai, which have seen her heal a strained relationship with her daughter-in-law, Amanda, and, in one moving scene, reminiscence about Daniel’s late father.

After featuring as the main villain of The Karate Kid and having a minor role in Part III, Martin Krove returned as Cobra Kai co-founder John Kreese in season one’s sixth episode, going on to become a regular in each successive season. Multiple flashbacks reveal his origins and service in the Vietnam War. By the end of season four, Kreese had been framed for assault by his old partner, Terry Silver.

Johnny reunited with many of his old Cobra Kai pals in season two’s “Take a Right” for one last day of motorcycle-riding fun with Tommy, who was dying from a brain tumor. Although the foursome were bullies in high school, each is shown to have matured and mellowed in middle-age. Bobby, now a pastor, returned for an episode of season three. Johnny’s other friend, Dutch (Chad McQueen), has yet to appear on CK.

Kumiko was Daniel’s love interest in The Karate Kid Part II, the niece of Mr. Miyagi’s first love. In Part III, she is written out as attending a dancing school in Tokyo. In CK season three, Daniel returns to Okinawa and reunites with Kumiko, who has enjoyed a very successful international dance career but has never married, hinting that she’s never gotten over Daniel.

Chozen was perhaps the most dangerous foe Daniel ever faced in the Karate Kid trilogy as they have a bonafide fight to the death at the end of Part II. When he returns in CK season three, however, Chozen is much changed and aids Daniel by teaching him some more aggressive Miyagi-Do techniques he never knew. Season four ended on the cliffhanger that Daniel has turned to Chozen for help against Cobra Kai.

Yuna originally appears in Part II as an unnamed young girl who Daniel bravely saves from being electrocuted by a power cable during a storm. Upon his return to Okinawa in CK, Daniel discovers that — luckily for him — Yuna has become the Vice President of Doyona Industries, the company he needs to partner with to save his business.

Ali Mills is the first love of both Johnny and Daniel, initially dating the former in The Karate Kid but ending up with the latter. She is much referenced across CK‘s first two seasons before debuting in season three after Johnny reconnects with her online. They initially appear to rekindle their old romance before Johnny decides he wants to be with Carmen. We also learn that Daniel’s claim in Part II, that she dumped him for another guy, was just a misunderstanding.

Ali’s mother, Mrs. Mills, is depicted as disapproving of her daughter’s relationship with Daniel, due to his poor background, in The Karate Kid. She doesn’t seem to have changed much decades later as she likewise disapproves of her daughter’s divorce when she returns in Cobra Kai. Deborah May replaced original actress Sharon Spelman for the series.

Terry Silver is essentially the ultimate villain of the Karate Kid trilogy, revealed as the co-founder and money man behind Cobra Kai in Part III. His duplicitous tactics make him an even greater threat than his old army buddy, Kreese. In CK, Silver has attempted to bury his former aggression but Kreese encourages him to embrace his true self. He came to regret this as, going into season five, Silver has stolen Cobra Kai from him and is more powerful than ever.

The latest Karate Kid character to return is Mike Barnes, who’ll feature in season five. Introduced in Part III, Barnes was a merciless karate prodigy allied with Silver and Cobra Kai who Daniel managed to beat to win his second All-Valley Tournament. It’s unknown how he’ll factor into the series, but it’s likely Silver has reached out to his former student now that he’s opening multiple dojos across the valley.