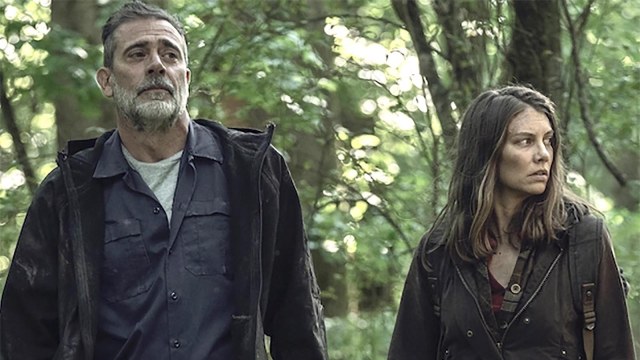 12 years and 11 seasons later, AMC’s hit show about zombies The Walking Dead will air its final episode on Sunday, Nov. 20. While fans may understandably be sad to see one of their favorite shows go off the air, they’ll have plenty of spin-offs to watch in the near future. Three Walking Dead spin-off shows have already begun (or finished) airing, starting with 2015’s Fear of the Walking Dead which is now already on its eighth season and there are another three spin-off series currently being developed.

With so many spin-off series already in development, TWD fans don’t need to worry about running out of zombie-filled TV anytime in the near future. So, here’s what we know so far about the three upcoming The Walking Dead spin-offs.

One of the most heavily anticipated Walking Dead spin-offs is The Walking Dead: Dead City which pairs two unlikely characters together in a six-episode arc. The show will follow Negan (Jeffrey Dean Morgan) and Maggie (Lauren Cohan) as they zip-line over a post-apocalyptic Manhattan. Negan famously killed Maggie’s husband Glen mercilessly in front of her, something Maggie has understandably hated Negan for ever since. The latest seasons of The Walking Dead have shown the two learning to tolerate each other, but a spin-off forcing the two to share the screen? Fans would never have predicted this just a few years ago and that’s what makes the show so intriguing.

Per Deadline, the upcoming Dead City (previously titled Isle of the Dead) will have the pair journey through a Manhattan “filled with the dead and denizens who have made New York City their own world full of anarchy, danger, beauty, and terror.” The show will star Gaius Charles, known for Friday Night Lights, as Perlie Armstrong, who is described as, “confident, ruthless, and unyielding in the pursuit of what he believes is justice.”

The show is slated for release sometime in 2023 on AMC and AMC Plus and will be showrun by The Walking Dead writer Eli Journé.

Set to release sometime in 2023, the appropriately-named Daryl Dixon will follow the character of the same name. The spin-off was previously announced in 2020 as a show featuring Daryl and Mellisa McBride’s Carol, but after McBride was unable to relocate to Europe for the spin-off, the show was reworked to be about Daryl alone. The show will follow Daryl (played by Norman Reedus) in Paris, France and will star Adam Nagaitis as a “displaced Brit who has become powerful in post-apocalyptic Paris as a black marketeer and the owner of the Demimonde, a sexy underground nightclub” and Clémence Poésy as a “member of a progressive religious group who joins forces with Daryl” according to a report by Variety.

David Zabel, known for being the showrunner of the medical drama ER, will be Daryl Dixon‘s showrunner and the spin-off will be in good hands with current Walking Dead showrunner Angela Kang as the show’s executive producer.

Not much else is known about the plot, but Reedus has hinted that fans haven’t seen the last of him and Maggie, so fingers crossed that McBride will make an appearance in some capacity.

The most recently announced spin-off is an untitled spin-off starring Rick (Andrew Lincoln) and Michonne (Danai Gurira). The show is currently only in pre-production so little is known about the plot, but we do know the spin-off will be six episodes long. In an interview with Self, Gurira told the publication the filming for the spin-off would begin in January of 2023 and revealed she is the co-creator of the show. Gurira also let slip that she’ll write for the upcoming series along with showrunner Scott M. Gimple, who was The Walking Dead showrunner for seasons four through eight.

In an episode of Talking Dead, Gimple called the new spin-off an “epic and insane love story” and said about the two main characters, “These are two people that have been separated for a very long time. They’ve lived whole other existences and they have to find themselves again, let alone each other.” He notes that the show will not just be a romance and viewers will get to see the two in action sequences as well.

The show is set in an unknown location and will air sometime in 2023 on AMC and AMC Plus.