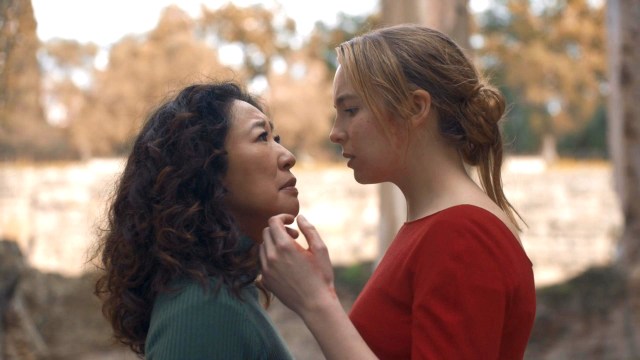 Fans are happy that Sandra Oh and Jodie Comer received Emmy noms for Killing Eve, but they’re even happier that the show itself didn’t.

“Do you know how outstanding Sandra and Jodie’s acting has to be for them to still get Emmy nominations after that shit show?” Twitter user @tedstinas asked rhetorically. “THEY ARE THE MOMENT.”

“[The Emmys] are just like us fr,” @vilxanxve wrote after recognizing that Killing Eve was absent from the Best Drama Series category despite its two leads nabbing acting nominations.

A spy thriller from BBC America, Killing Eve had perhaps the largest drop in acclaim from first season to last since Game of Thrones. The show’s first season registered 96 percent approval on Rotten Tomatoes, but for season 4 only 55 percent of critics gave it a “fresh” score. Fans were even more disapproving, as just 31 percent gave season 4 a positive review.

Judging by the above tweets and the Emmy nods, few people blame Oh and Comer for the show’s downfall. In fact, one Twitter user blamed season 4 head writer Laura Neal, an easy scapegoat since each season had a different head writer.

Stream the full series of Killing Eve to ascertain where the blame should be directed, and then check out the 74th Primetime Emmy Awards on Sept. 12 on NBC to see if Oh and Comer will rise like phoenixes out of the ashes of season 4.