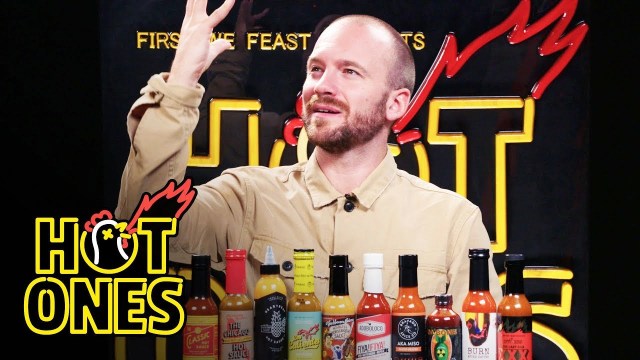 When we first saw the show Too Hot to Handle pop up in our Netflix scrolling, we figured it was a spinoff show about Hot Ones and those that went down in flames. Turns out, it’s not.

But wouldn’t you watch a show, maybe even behind the scenes, of Hot Ones and all the people who joined the show thinking they could muster the strength to take down all 10 super spicy tests, only to feel the burn in their mouths and tap out?

In honor of Hot Ones, we’re going through the best (well, worst) 10, starting with the mild and going all the way to apocalyptic wild. If you aren’t 100 percent familiar with the premise, host Sean Evans interviews a celebrity while both of them work their way through 10 wings — and accompanying hot sauces that escalate in heat as the host and guest progress. The level of ability of guests to finish the hottest hot sauces on the planet while trying to answer questions is highly unpredictable, and often hilarious. The show just concluded its 18th season in August, with notable guests such as Neil Patrick Harris, Millie Bobby Brown, Lizzo, Tessa Thompson, Kevin Bacon, and Queen Latifah. Episodes are available on the First We Feast YouTube channel.

As you may know, the show has adopted an actual Hot Ones Hall of Shame — a group that hangs in infamy on the now known as the Wall-Most Made It. A total of 16 contestants haven’t finished all 10 wings so far, including the very first guest ever on the show, Tony Yayo. We’re letting Yayo off the hook here since he was the very first guest ever, so he didn’t have the buildup of know how he needed to go about and crush the challenge.

While this list does include some folks who made it through all the wings, it doesn’t mean they necessarily handled the heat.

We quite enjoyed the way Gaffigan became enflamed at how hot the wings got. By wing number eight, he was incensed, almost like someone who hits their head really hard on an inanimate object and wants to yell at it but realizes nothing can be done.

Gaffigan almost made it though, finishing eight wings, and the way he goes about his business and the interview are commendable.

Although André made it through the entire 10-sauce challenge his first time on the program, for some reason the comedian came back again for another go-round. His second appearance, which happened via video call during the COVID-19 pandemic, came from the comforts of his own home.

And yet, on this second taping, Andre was unable to make it through to the end. Perhaps he psyched himself out or took it a little too lightly since he was able to finish the first time, albeit amidst plenty of struggles.

No offense here, but there’s a reason that some cultures are known for not being able to handle very spicy food. Even in the land where curry is famous, the British actor was undeniably overwhelmed by even the slightest hint of spice.

From wing one, Gervais was already checking out. He didn’t get through the whole set of wings, or even pretend that he could, but we’ll be damned if it wasn’t at least entertaining as all hell.

He almost made it. He kept inching forward, tears coming streaking from his eyes as if his insides were sweating their way out.

Corddry zooms through the first four wings. Wings five and six show you just how quickly things can escalate, and it’s becoming clear he won’t be able to finish them all, but he keeps pushing through. After the seventh wing, it looks like he is all done. Yet, he goes back for one more and that’s that, as Corddry essentially breaks down into pools of water as he gulps down milk.

This is one of the weirdest episodes, and with more than enough entertainment value. As a fan of Henson, it was surprising to see that she didn’t take the challenge.

The whole point of the show is to see how you react and how you keep interviewing even in the face of overwhelming heat. Henson not only bailed, but she had her bodyguard come in her steed and finish the wings — while she went through with the interview. Sure, she was still charming, and she probably thought the bit to find a pinch-eater was funny, but it left us a little lacking because you can’t keep giving a normal interview and not be invested in the heat.

Maybe the most well-known guest to come on Hot Ones, Ramsey’s appearance is one for the ages.

We tuned in to see his takes on a food he would definitely declare as sub-par, wings, and he sure did deliver. But for the man who’s been around just about every food and situation and probably tasted things beyond what was presented in the episode, it was too much for the foul-mouthed one to handle.

In the beginning, it was a lot of fun seeing the culinary master berating the wings and talking food with Evans. Even though he was trying everything possible to avoid those last few wings, we gotta give credit to the fact that he at least finished all 10, unlike some of our other contestants.

Amateur hour here. Huang tried to show how tough and smart he was by starting with the hottest wing; thinking he would get through the pain then calm things down going from spiciest to mildest. He got through a whopping two. Just two.

Clearly an amateur tasting move — you don’t go most bitter to least bitter, because you’ve already wrecked your palate — Huang thought somehow the hottest one would subside. Instead, it stayed on his tongue for the ride, one he did not finish.

We would have put Huang closer to the top of this list had he not been brave enough to go on camera again — after all that happened — and take on the challenge once more. Even though he could have come out even worse, he started from, well, the start this time, and actually made it through the entire 10 sauces and their wings.

Maybe you saw this one coming and think he should be a little higher. The man who basically ate the least wings ever — a whopping three — came in overconfident and overzealous. Sure, Huang only got through two, but that was out of stupidity of going for the hottest and second-hottest ones first, so he was at a (albeit self-caused) disadvantage. Khaled started on the mild side, and showed his mild side.

From enjoying the first wing to then basically giving up one wing later, Khaled couldn’t even bring some entertainment value to the episode, bombing in basically every aspect. We’d still watch his take again over the next person — actually two people — on the list, though.

You might think to yourself, “who?” if you aren’t familiar with the longtime comic.

Or, you might think, “Oh, that one guy who peed himself and farted a lot and was basically unwatchable during that one really gross Hot Ones episode?” Lee is maybe the one guest who didn’t eat all the wings that we were fine with, and we were rooting for to stop sooner. It was certainly not good times for Lee, for host Evans, for viewers, and likely for anyone within any radius of the set.

Known for his “hot takes,” we have to admit that we were surprised. When Shaq showed up to Hot Ones and started spewing his patented brand of smack-talk about how he’s gonna take down the wings without even making a facial gesture, and acting like it was all beneath him — even though he willingly came on the show — we checked out on Shaq even more.

For a guy who has no problem dissing others and talking the talk, he sure didn’t walk the walk — actually, he did walk, right on outta there without finishing his last wing. Back in our day, if you said you were gonna take a challenge and eat a bunch of wings or spicy stuff, you followed it through. However, perhaps today’s NBA wing-related show guests are of a different breed.

Here’s the dishonorable mention of the rest of the folks who could not or would not complete the entire challenge: Mike Epps, Lil Yachty, E-40, Chance the Rapper, Quavo, and Pusha T.