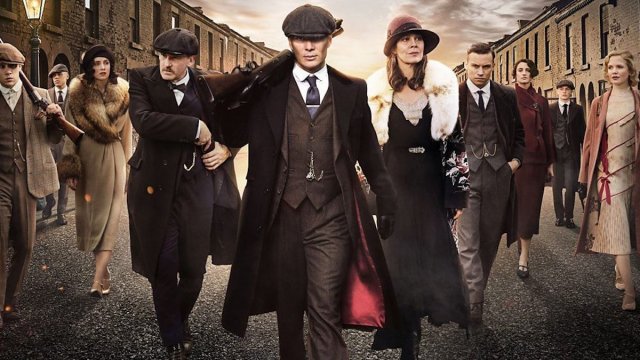 Peaky Blinders was a smash hit show that captured the hearts of many viewers. While it launched in the UK in 2013, the show didn’t truly take off until it hit Netflix, bringing it to a brand new international audience who quickly fell in love with the story.

One thing that makes Peaky Blinders stand out is its attention to detail. The show spent a lot of time perfectly capturing the look and feel of the UK in the years before World War II. On top of this, the show’s dark and often dingy color palette gave the whole thing a unique vibe. Because of this, many of the actors who performed in the series are totally unrecognizable.

So if you’ve ever wondered what the main cast of Peaky Blinders looked like in the real world, here they are.

What is Peaky Blinders about?

Peaky Blinders is a crime drama series set in Birmingham, England between 1919 and 1935. Semi-based on the real-life criminal gang of the same name, the show follows the Peaky Blinders and their boss Tommy Shelby as they try to manage their organization and their own lives and navigate frequent run-ins with the police, political groups, and other criminal organizations.

What does the Peaky Blinders’ cast look like in real life?

Thomas Shelby, played by Cillian Murphy, is one of the series’ most mind-blowing transformations. As the usually happy-go-lucky Cillian looks nothing like the dour crime boss.

While not as big of a transformation as Cillian Murphy, Paul Anderson still takes on a much more grizzled edge when stepping into Arthur Shelby’s shoes.

Sophie Rundle puts in a stunning performance as Ada Shelby. Ada shows that being driven and rambunctious runs in the Shelby family as she isn’t one to take no for an answer. The most noticeable difference between Rundle and her on-screen character is the hair, as Ada’s short brown hair is miles apart from Sophie’s long blonde locks.

A fixture of the show’s first four seasons, John Shelby, played by Joe Cole, is a fantastic example of how outfits from the period gave people very different silhouettes. While Joe Cole has a distinctive look, he appears vastly different while playing John Shelby.

Another Shelby child, Harry Kirton, is one of the more recognizable actors in the show. However, he slicks back his hair for the part, meaning that most viewers will need to do a double take before they identify him.

Played by Kate Phillips, Linda’s more conservative looks make her easier to identify at a glance.

Portrayed by Annabelle Wallis, this character has come and gone a few times during the show’s run. However, it is another outstanding example of how period hairstyles can change your look, as many likely wouldn’t have recognized Wallis at first glance.

While only a guest character in season one, Lizzie would become a series fixture starting in series two. Played by Natasha O’Keeffe, this role shows how a change in hairstyle can transform someone’s look.

Anya Taylor-Joy has been frequently praised for her performance as Gina Gray. However, her transformation isn’t as dramatic as the other actors. Mostly because Anya often rocks retro-inspired looks. And she took on a similar period style for The Queen’s Gambit.

The Jamaican-born street preacher is instantly recognizable to British viewers as he is played by Benjamin Zephaniah. Zephaniah is a legendary writer and dub poet who is most known for his poems The British, Library Ology, and City River Blues.

Another character who started out as a recurring one before later joining the main cast, Packy Lee, is unrecognizable as Johnny Dogs because the character lacks the beard that Lee is usually seen rocking.

Gangster Alfie Solomons was a popular character when he appeared in the second season. He quickly became a fixture of the show. However, few realized he was played by Venom actor Tom Hardy until they checked the credits. The beard and the show’s generally darker ambiance make Hardy look like a totally different person.

The British prime minister from 1940 to 1945 and from 1951 to 1955. Churchill was portrayed by several actors during the show’s run. With Andy Nyman, Richard McCabe, and Neil Maskell all stepping into his shoes. And all three undergo a massive transformation to take on the role. Many viewers couldn’t recognize the actors until they looked at the end credits.