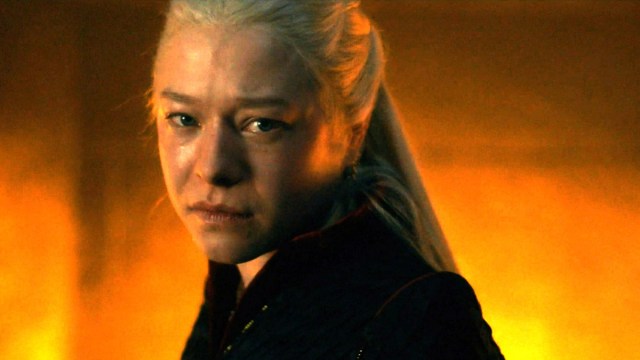 House of the Dragon season one ended with a chomp that’s going to have huge consequences for Westeros. Despite being usurped in favor of the drunken rapist Aegon, Rhaenyra spent the episode trying not to rush into war. To that end, she sent her sons on dragonback to visit the lords who swore loyalty to her at the beginning of the season, with Jace headed to the Vale and Winterfell, while the younger Lucerys was off to Storm’s End.

Sadly, Aemond and his Godzilla-sized dragon Vhagar got there first, with Lucerys having to flee through a rainstorm after Aemond demanded his eye. Lucerys’ Arrax was like a sparrow being pursued by an eagle, though bravely attempted to blast the larger dragon. Aemond lost control of Vhagar, the dragon took one fateful bite, and destroyed Lucerys and Arrax, sending their remains spiraling down into the ocean.

As the episode ended Rhaenyra received the tragic news, staring furiously into the fire before turning around with a scarily determined expression. It’s war!

Now, showrunner Ryan Condal has revealed the amount of thought that went into getting that closing moment just right in an interview with Variety.

I have a bunch of favorite moments in the episode, but that ranks right up there. The very last action line of the script was, “Rhaenrya looks up and war is in her eyes.” That was in the first draft of that script. That was always the plan for ending the season, because after all this internal debate that Rhaenyra goes through over the course of the episode, everything changes the moment that she learns about the treachery at Storm’s End and the death of her son.

Though it appears to be a simple shot, the reality was anything but.

“Emma’s a superhero, I have to say. But we shot that scene for most of the day. It’s a scene that you have to prep and rehearse. We actually only probably shot it a few times, because it took hours to actually set up. There’s a lot of action going on: who lifts the drink, all these little things that seem to be just random happenstance are very perfectly planned. Daemon is reaching Rhaenrya just as the as the framing is coming into place. It’s a complex dance. So we rehearsed it for most of the day. I think we probably did three or four takes of it. And Emma, man, did they nail it. Just incredible.”

Just as with Game of Thrones‘ season finales, we’re now desperate to find out what happens next. How will Alicent react to discovering Aemond has spilled royal blood? Daemon was already itching to race into battle, but this will likely send him over the edge. And you have to imagine Jace will vow bloody vengeance against Aemond.

The second season won’t go into production until mid-2023, so expect House of the Dragon to return in summer 2024. It’s going to be a painful wait.