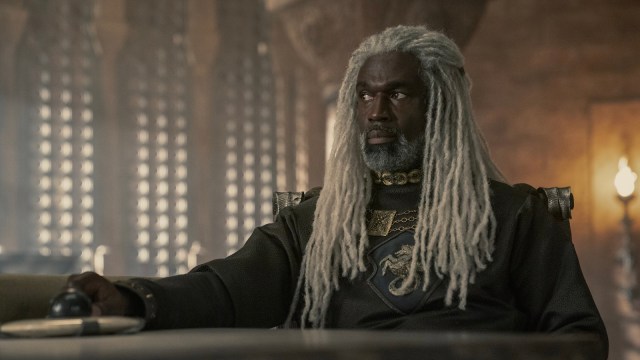 Fans of the new Game of Thrones prequel, HBO’s House of the Dragon, are already obsessed with one of the couples in the series, Rhaenys Targaryen (Eve Best) and Corlys Velaryon (Steve Toussaint), who is also known as ‘The Sea Snake’.

A recent Reddit post has pointed out the interaction between the power couple during the tourney for the heir of King Viserys Targaryen (Paddy Considine), right after Boremund Baratheon asked for Rhaenys’ favor, calling her “the Queen who never was.”The pair proceeded to gossip during the entire tourney and react to some of the more humorous and awkward bouts, especially when they affected some of the members of their family.

One Redditor is making it known that their dynamic is already one of their favorites in the series, even though we have only seen one episode. They commented, “Couple who gossip together stay together! Love their dynamic.”

Their dynamic is not the only thing drawing people’s attention, with one fan pointing out that Rhaenys is not just a fan favorite character, but a favorite among the people of Westeros as well, “It’s only been a few scenes and you can already see why despite the misogyny in Westerosi culture, so much of the realm worships Rhaenys as the queen who never was.”

This might play into future episodes of House of the Dragon, as we will probably see some sort of power dynamics based on the fact that Rhaenys was passed over as Queen of Westeros as well as Corlys’ spot on the small council.

Another fan is drawing a comparison between Rhaenys and another fan favorite from Game of Thrones, Lady Olenna Tyrell. The Redditor made the comparison with “Rhaenys is exactly how I imagine a younger Olenna Redwyne.”

In case it has been a while, Lady Olenna (Diana Rigg) was the Queen of Thornes in Game of Thrones, the elderly woman who was known for her biting remarks and who admitted to killing Joffrey before she died. Redwyne was Lady Olenna’s maiden name.

Although when it comes to a Game of Thrones prequel, fans should know not to root for couples too soon, as one or both of the members of the couple could turn up dead. But fans of the source material Fire and Blood will know where their story is headed. One fan is clearly excited to see how Rhaenys’ story is adapted from Fire and Blood, writing “She has a seriously epic arc in the books, can’t wait to see it on the screen.”

Let’s just hope for the best for Rhaenys and Corlys, as the pair do seem like they could be one of the best power couples in all of Westeros. Catch House of the Dragon as it airs on HBO on Sundays.