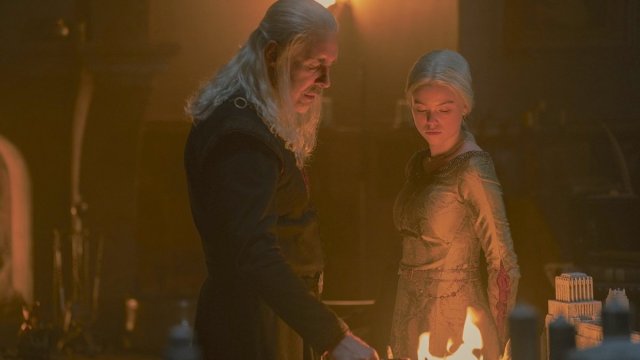 With so many players in the political landscape of Westeros vying for power and maneuvering to buy advantage, it’s difficult to remember that the entire fiasco started when someone sent a catspaw assassin to murder a crippled Brandon Stark after he spied on Jaime Lannister and his sister having an incestuous relationship.

The assassin used a Valyrian steel dagger that went on to be a significant plot tool in Game of Thrones. It was actually Brandon who came to possess the dagger in the end, and he gave it to Arya Stark, allowing her sister to kill the Night King when the time came.

Before House of the Dragon came along, we knew nothing of the dagger’s origins and how it came to be in Robert Baratheon’s possession. But now, the prequel series has revealed that it was Aenar Targaryen who originally owned the dagger, which he then passed to Aegon the Conqueror. Aegon had his pyromancers incise the prophecy of his house into the blade, which is only visible when the blade is heated in flame, with the engraving reading as: “From my blood come the prince that was promised, and his will be the song of ice and fire.”

Years later, the steel has wound its way to Viserys’ side, revealing that each Targaryen king has passed down both the weapon and the prophecy that comes with it. But were there always hints signifying its importance in Game of Thrones or are these new plot elements being added to the canon as an afterthought?

What is the history of the Valyrian dagger?

While Brandon Stark was still on his sickbed, an assassin comes to his chambers wielding a Valyrian steel dagger. His mother Catelyn fended off the killer, giving one of their direwolves, Summer, the opportunity to leap for and kill the assassin.

After showing it to several of her household members, Catelyn comes to the conclusion that the dagger must belong to someone wealthy since it’s been wrought with Valyrian steel with a hilt made of dragonbone. Catelyn travels all the way to King’s Landing, and there, Petyr Baelish lies to the Starks by claiming that the dagger belongs to Tyrion Lannister. Catelyn kidnaps Tyrion on her way, and the rest, as they say, is history.

Even now, the books haven’t revealed the identity of the person who sent the killer, though Tyrion and Jaime surmise that it could have been Joffrey Baratheon, the latter’s bastard son.

As for its origins, Game of Thrones doesn’t elaborate much on that regard either, though there’s no denying that the dagger played a key role in the events of the main series. After Baelish betrayed Ned and reclaimed the dagger for his own, he gave it to Brandon Stark, and he in turn gave it to Arya Stark. Bran had seen the future, so by giving the dagger to Arya, he ensured that it’d be there when she went up against the Night King in the final season’s third episode, “The Long Night,” thus ending the threat of the White Walkers and saving the world.

Now, with the premiere of House of the Dragon, showrunner Ryan Condal and creator George R.R. Martin are once again expanding the lore by incorporating the dagger into the Targaryen dynasty. King Viserys is constantly seen wearing it, and he even explains its significance to his proclaimed heir, Rhaenyra Targaryen. But talk about it as they may, it doesn’t change the fact that Game of Thrones completely forsook the prophesied Song of Ice and Fire and Azor Ahai, the Prince Who Was Promised.

Was the Song of Ice and Fire referring to Arya Stark? She was no Targaryen, that we know for sure. Which leaves Jon Snow, also known as Aegon Targaryen, born out of the marriage between Rhaegar Targaryen and Lyanna Stark. But if the writers intended Jon to be the ultimate hero of the story, why was he so useless in the final season? Is Martin simply setting up his own ending in the as-of-yet unpublished final two novels? Or is the show trying to tie itself into Game of Thrones by any means necessary?

So many questions that need answering, whether through the books Martin has yet to publish or this new prequel series. But whatever ends up being the case, something tells us the Valyrian steel dagger is going to play an important role in the events that are to come in House of the Dragon, as it once did in the original show.