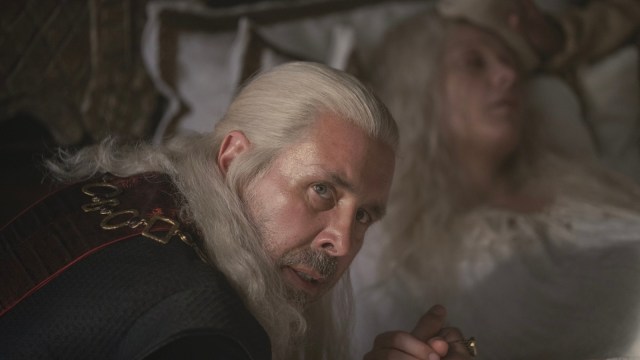 House of the Dragon star Paddy Considine wants the series to be more than just spotting Easter eggs. The actor plays King Viserys in the prequel series, a man who struggles with the decision over who should inherit the throne, and great conflict arises because of it.

In an interview with The Hollywood Reporter, Considine discussed the comparisons to the original show and finding the right balance.

“I think it can work. I don’t want it to be one of those Easter egg-y shows — ‘Oh there’s Boba Fett’s helmet,” and all that. There will be little things where fans will go, “Is that what I think it is?” But it’s not a show relying on Easter eggs to get by. It’s a great narrative. It’s a family drama. There are all kinds of great stuff in it. It’s very much steeped in the world of Game of Thrones and not a spinoff where they’re trying out new stuff. Hopefully, fans dig it.”

With so many classic franchises steeped in lore, it’s easy for fans to treat shows like an Easter egg hunt. Star Wars and the MCU have so much history at this point that there are inevitable references to the respective universes at large. Any Disney Plus series from either universe will undoubtedly have a long list of teases, and fans have come to expect this.

There have already been comparisons made between House of the Dragon and Game of Thrones because of just how iconic the original series was. The prequel series takes place 172 years before the original series, and its main location is King’s Landing, an area GOT fans are quite familiar with after eight seasons.

The first episode of House of the Dragon has familiar sites like the Red Keep and the throne room (with a redesigned throne that’s book-accurate) and a familiar weapon, the catspaw dagger Arya Stark (Maisie Williams) used to kill the Night King in GOT season eight. Despite this, it’s clear Considine wants the interest to remain on the Targaryen family drama that’s brewing.

The actor has previously spoken about Viserys’ complicated relationship with his brother Daemon Targaryen (Matt Smith) and how it might not be as typical as one might think. Despite the evident differences between them, they love one another, and the actors wanted to represent that onscreen.