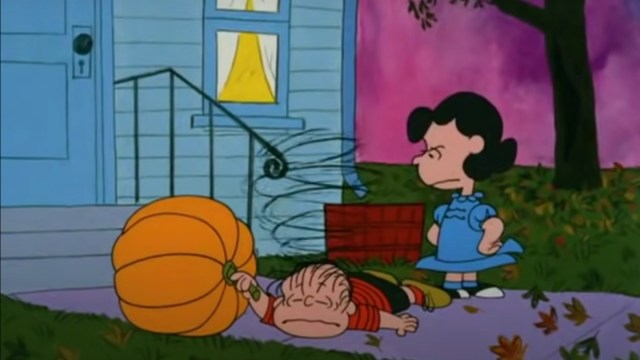 For the first time in 55 years, one of the most classic of classic episodes of television will not be on television.

That’s right, one streaming service is playing the role of Lucy this Halloween season, as they’ve yanked the football, well, pumpkin, right out from under our feet this year.

The very first time that the iconic scene in Peanuts (aka Charlie Brown) — when Lucy pulls the football away right as Charlie Brown is about to kick it — appears in animated form outside of the comic strip is in It’s the Great Pumpkin, Charlie Brown — and that scene as well as the entire episode will not be airing on traditional TV at all this year.

Thankfully, we can avoid the trickery and find the treat of a classic show on streaming this year, leading up to and especially on Halloween. Is the episode not airing because people don’t watch traditional television anymore? Hardly. It’s just another tactic in the arms race known as the streaming wars, with one service gaining and securing the rights to the asset, and refusing to share it with anyone else.

The always-wholesome and transparent company Apple gained the rights to perhaps the greatest holiday trio of shows in existence — A Charlie Brown Thanksgiving, A Charlie Brown Christmas, and our show at the forefront right now, It’s the Great Pumpkin, Charlie Brown, back in 2020. PBS tried to make the episode available once again, but made the sad announcement on Twitter late in September that it wouldn’t be happening this year.

“Regretfully, PBS does not have the rights to distribute the Peanuts specials this year,” their Tweet from the @PBSKids handle reads. “We’ll all have to watch for the Great Pumpkin in a different pumpkin patch this Halloween.”

Not very holiday spirit, we’ll say. But you have to get used to such things these days, and find ways to still watch the classics even in untraditional ways. All right, we might be going a little cynical these days, so let’s step back and consider the spirit of Peanuts, of Charlie Brown, and especially of the show’s soul and moral compass — Linus.

Maybe he would step back and see the bigger picture, and say, “It’s a holiday miracle, Charlie Brown!” because all three holiday specials will still be available for kids and adults alike to watch for free! That’s right, at least for 2022, even though you need something to stream it on, we can join the Peanuts crew in that great pumpkin patch once more.

“Nothing but sincerity as far as the eye can see,” the great Linus says in the Halloween episode.

We might as well roll out his full quote now.

“Each year, the Great Pumpkin rises out of the pumpkin patch that he thinks is the most sincere. He’s gotta pick this one. He’s got to. I don’t see how a pumpkin patch can be more sincere than this one. You can look around and there’s not a sign of hypocrisy. Nothing but sincerity as far as the eye can see.”

Although the Charlie Brown special episodes were still able to air on TV the past two years in 2020 and 2021 thanks to PBS, this year Apple TV+ is keeping them all to their self. Yet, in a show of understanding just how special and important to generations of people Charlie Brown is, Apple TV+ is doing the right thing and making the Halloween-centric episode available without a subscription.

We had to dig a little deeper and do a double-take on that last one. But, it’s true. From Oct. 28 through Halloween, Oct. 31, people without an Apple TV+ subscription can watch It’s the Great Pumpkin, Charlie Brown for free!

The same will follow for the Thanskgiving and Christmas specials as well. From Nov. 23 through Nov. 27, fans can watch A Charlie Brown Thanksgiving without a subscription, and then from Dec. 22 through Dec. 25 A Charlie Brown Christmas will be available to stream at no cost as well.

For those with a subscription, you can watch It’s the Great Pumpkin, Charlie Brown anytime, and the other two holiday specials are also on the platform for your viewing pleasure at your leisure if you’ve got that Apple TV+ sub.