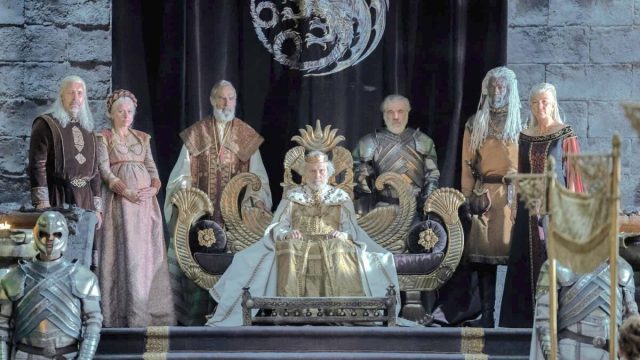 The following article contains spoilers for the sixth episode of House of the Dragon.

The world of Westeros is filled with many different castles and lands complete with their own reigning lords and ladies. Over the course of Game of Thrones and its HBO prequel House of the Dragon, we have been introduced to many of these areas and their people. But one of these lands and the castle which sits on it is said to be home to a curse during the events of Game of Thrones.

The castle in question is Harrenhal, one of the largest castles in Westeros. The castle is located in the Riverlands and has stood throughout the beginning of Aegon the Conqueror’s reign all the way until after A Song of Ice and Fire. However, the castle can never seem to hold down a castellan, with the House or individual holding the castle usually meeting some untimely end while they are in possession of it. In the latest episode of House of the Dragon, the curse may have struck again, claiming the lives of two characters. But is the castle really cursed? Let’s take a look at the infamous history of Harrenhal and those who fell victim to the supposed curse of the castle.

What is the curse of Harrenhal?

To understand the Harrenhal curse, you must journey back to when the castle was built. Harrenhal was being built when Aegon the Conqueror first landed in Westeros with his two sisters and their dragons. Aegon’s Conquest started the same day that Harren the Black had finally completed the construction of the great castle, which had been worked on for 40 years. Harren the Black refused to yield to Aegon when he came to his doors, boasting that the five-towered castle could not be taken by force.

It is here where the first victims of the so-called curse of Harrenhal perished. Aegon riding Balerion the Black Dread came from the sky and set the entirety of the castle on fire, melting its stone and burning its people alive. All the members of House Hoare, the House to which Harren the Black belonged, were wiped out in the fire. The rumor of the curse would not spread immediately as it does take a few tragic events for rumors of a curse to form. The next House to meet its end was House Qoherys when Gargon Qoherys was killed in the castle. The castle moved briefly to House Harroway after the extinction of the Qoherys line. The honor fell to Lucas Harroway who married his daughter to the then King, Maegor the Cruel. When his daughter Alys had a stillborn and deformed baby, Maegor executed not only Lucas Harroway but every other member in the line as well as anyone he suspected had slept with Alys.

After a while, the castle fell to House Strong and we finally arrived at the events of House of the Dragon. In episode six of the series, it was revealed that Larys Strong (Matthew Needham) organized the death of his brother Ser Harwin Strong (Ryan Corr), and his father Lord Lyonel Strong (Gavin Spokes). He released a few inmates who were scheduled for execution, removed their tongues, and sent them to Harrenhal to start the fire that killed his family. The castle will stay in House Strong for now, as the curse has only claimed Harwin and Lyonel and there are still Strongs left alive. House of the Dragon will undoubtedly continue the tradition of the curse, but we’ll have to keep watching to see who it claims next.

By the time of Game of Thrones, Harrenhal was being kept by Shella Whent, the last of her house. Once Tywin Lannister (Charles Dance) had invaded the Riverlands, he claimed the seat for himself before passing it along to Janos Slynt. Slynt was then stripped of his title by Tyrion Lannister (Peter Dinklage) and sent to the Wall, where after refusing to follow the orders given to him by Jon Snow (Kit Harrington), he was executed. Harrenhal was abandoned, with Amory Lorch left behind as castellan. Roose Bolton (Michael McElhatton) held the castle for a time after killing Lorch. Although Bolton was killed by his bastard son Ramsay (Iwan Rheon), that was not why the castle left his possession. Bolton instead gave the castle to Vargo Hoat, who was killed by Gregor Clegane.

Gregor Clegane briefly held the castle before journeying to fight for the King in Tyrion Lannister’s trial by combat, where he was killed by Oberyn Martell (Pedro Pascal). But while all this was happening, King Joffrey Baratheon had given the castle to Lord Petyr Baelish (Aiden Gillen), although he never actually took possession of Harrenhal, fearing its curse. As he never took possession of the castle the others were free to claim it as their own as Baelish never defended it.

With that being said the curse still took its toll on Petyr Baelish as the consequences of his own scheming finally caught up with him when Arya Stark (Maisie Williams) executed him for starting the War of the Five Kings, and for being the one responsible for the execution of her father Eddard ‘Ned’ Stark (Sean Bean). When Gregor Clegane had left for the trial by combat, he left Polliver in charge of Harrenhal, who was killed soon after by Gregor’s brother Sandor Clegane. While it was not focused on in the series, in the books the last castellan is Bonifer Hasty and he will probably succumb to the curse as well, in a future book.

As you can see, many of the individuals who have called the halls of Harrenhal their home have met tragic, brutal, and in most cases line-ending deaths. Even those who managed to die a peaceful death left behind no heirs. So is Harrenhal really cursed? Well, you couldn’t blame a superstitious person for not wanting to take up residence there. Let’s hope that whoever ends up with the castle manages to escape their ruin long enough to keep their house going.

Again, we will undoubtedly see Harrenhal fall into other people’s hands throughout the course of House of the Dragon. To find out exactly what happens to its future inhabitants catch House of the Dragon as it releases on Sundays.