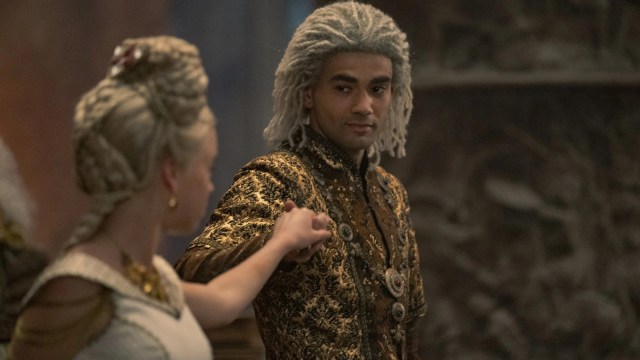 House of the Dragon has many important characters that factor into its story, and one that has begun to appear in recent episodes of the series is the son of the Seasnake (Steve Toussaint), Leanor Velaryon (John MacMillan.)

Laenor is a character adapted directly from the book Fire and Blood. He is a fierce warrior capable of riding the dragon Seasmoke. More recently in the show, he celebrated his marriage to the heir to the Iron Throne, Rhaenyra Targaryen.

House of the Dragon has provided further context into many of the aspects of Westeros mentioned during Fire and Blood and one of these is Laenor Velaryon’s secret relationship.

Is Laenor Velaryon gay in House of the Dragon?

Yes, as is confirmed in House of the Dragon episode five, and despite being betrothed to Rhaenyra Targaryen (Milly Alcock), Laenor Velaryon is gay.

Like most marriages in the world of Westeros, the union between Laenor and Rhaenyra is not one of choice but instead put together for political gain. This is why during the episode Rhaenyra suggests that the pair marry and produce heirs, but then go about their own desires afterward.

That Laenor is gay is not a change for the show, as it is alluded to in the book on which the show is based, George R.R. Martin’s Fire and Blood, however it is not outright confirmed. Fortunately, House of the Dragon has offered further clarity. The secret relationship with Joffrey is another aspect taken directly from the book.