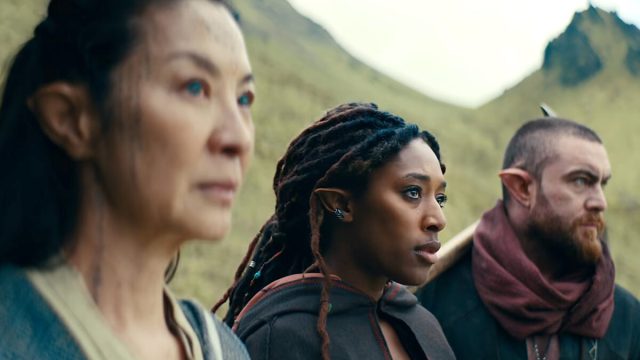 Netflix’s The Witcher has by all accounts succeeded in adapting the beloved fantasy novel series of the same name written by Andrzej Sapkowski. Geralt of Rivia, played by Henry Cavill, has captivated audiences to such an extent that the first two seasons of the show have become some of Netflix’s most-watched, according to Netflix Top 10. Now, The Witcher: Blood Origin, a prequel set 1,200 years in the past, is here to give context to the rich lore Sapkowski created in 1986.

When we meet Geralt of Rivia in season one of The Witcher he is smack dab in the middle of a world rife with conflict and chaos. The Continent is riddled with monsters that Geralt, as a Witcher, is tasked with defeating. Coexisting on The Continent are other races like elves, dwarves, and humans. What we discover in the show and in the books is there was a time when that wasn’t the case.

The Conjunction of the Spheres, a cataclysmic event that merged the realms of monster, human, and elves is the backdrop for The Witcher: Blood Origin. But are the creators of this new prequel show pulling from the pages of Sapkowski’s eight novels, or pulling from their own imaginations? Here’s what we know.

If ever a spin-off of The Witcher were to happen, it’s safe to say fans might think the creators would pull from any of eight novels Sapkowski wrote, the best-selling video games that spawned an entire fandom, or the half a dozen comics created in the video games’ wake. But no — The Witcher: Blood Origin is only based on “a few lines in the books,” according to Kelly Luegenbiehl, an executive at Netflix. So while the prequel is technically based on the books’ lore, it’s not based on a storyline that actually happened during any of the eight novels.

As mentioned, the Conjunction of the Spheres was a vital and pivotal turning point for The Continent. Witcher creators Declan de Barra and Lauren Schmidt Hissirch decided to pull on those strings to see what they could unravel in the process.

“We were trying to understand what the world was like for elves right before the Conjunction of the Spheres,” said De Barra in an interview with Entertainment Weekly. “It’s very vague in the books as to what happened. I got out a whiteboard and sketched out this plan of what I thought: what elves wanted in this world and what the society was like pre-colonization. That kind of stuck.”

De Barra said he came up with the idea for Blood Origin while scribbling notes on a napkin at a cafe. He called it “one of those rare sort of David Lynch in the cafe moments,” referring to the creator of Twin Peaks who often jotted down notes at Bob’s Big Boy restaurants.

The Witcher: Blood Origin sports a star-studded cast of actors including Everything Everywhere All At Once actress Michelle Yeoh, and will tout impressive vast visual landscapes that just may give The Lord of the Rings: The Rings of Power a run for its money. The four episode limited series premieres on Netflix on Dec. 25.