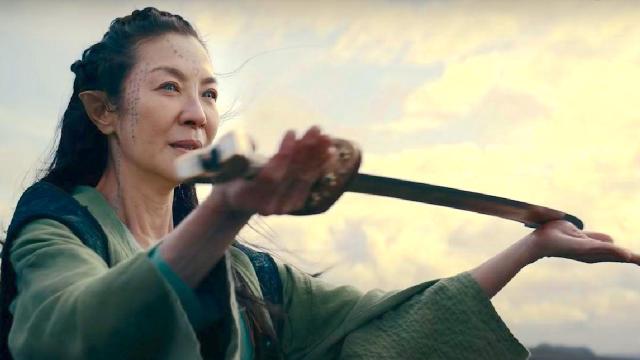 The robust universe of The Witcher is growing ever more elaborate as The Witcher: Blood Origin gears up for a rousing release on Netflix.

Taking place 1,200 years before the events of The Witcher, The Witcher: Blood Origin will explore the creation of the very first Witcher before Geralt of Riva (Henry Cavill) came galloping along, and will also delve into the thriving elvin empire that existed on The Continent before the Conjunction of the Spheres wiped out their existence.

A monumental event regularly alluded to in The Witcher, the Conjunction of the Spheres not only led to the extinction of the Elder Races (Elves, Gnomes, and Dwarves), but also served as one of the main reasons Witchers were even created: to combat the outpouring of monsters that swarmed The Continent following the Conjunction.

The Witcher: Blood Origin, like its cousin show, will sport an ensemble of impressive actors to tackle the ambitious storyline. At the 2022 Tudum event, Netflix even revealed the official release date, putting us one step closer to the all-encompassing Conjunction and whetting our appetites for the eventual release of The Witcher season three.

What is The Witcher: Blood Origin release date?

Netflix’s annual Tudum event held no punches as show after show was given exciting updates and sneak previews. Unfortunately, a full-length trailer for The Witcher: Blood Origin was not released, but a confirmed release date was finally nailed down.

Just in time for the Christmas holidays, The Witcher: Blood Origin will release all its episodes on Dec. 25. Previously, that included six episodes, but an unforeseen shuffling of the cards resulted in the scrapping of two episodes and the introduction of the familiar Witcher character — Jaskier — as the lead narrator.

Per Netflix’s usual standard, all four episodes will release at once, meaning there will be plenty of new Witcher content to see us into 2023, and by then we will hopefully have more news on season three of The Witcher.

Who is in the cast of The Witcher: Blood Origin?

Brown, known for her work on Giri/Haji, The Capture, and Clique, will play Éile in The Witcher: Blood Origin. Éile is described as a traveling musician and the daughter of the chieftain of the Raven Clan. Still a trained warrior, she leans on her fighting instincts to keep her safe but her true love lies in the art of making music.

Yeoh is no stranger to starring in big hits. She’s known most recently for her work in Shang-Chi and the Legend of the Ten Rings and Everything Everywhere All At Once. She will play Scian in The Witcher: Blood Origin, a survivor of a dying clan and an expert sword fighter who is protected and taken in by Éile and the Raven Clan.

Completing the trio is O’Fuarain, known for his work on The Limit Of and Viking Destiny. He plays Fjall in The Witcher: Blood Origin, an elf of the same hierarchy as Scian, albeit from a different clan. Like his two nomadic comrades, Fjall is cast out of his clan for reasons that will be made known in the show. He is a warrior like Scian and Éile but he is also brute, although one who is empathetic and emotional, a trait that gets him into trouble, in more ways than one.

None of the three main characters are based on Andrzej Sapkowski’s The Witcher books. Instead they come from the mind of the show’s creator, Declan de Barra, but like Sapkowski’s characters from the page, their backstories are rich and complex, and will likely add insight into how The Continent got to where it is in The Witcher.