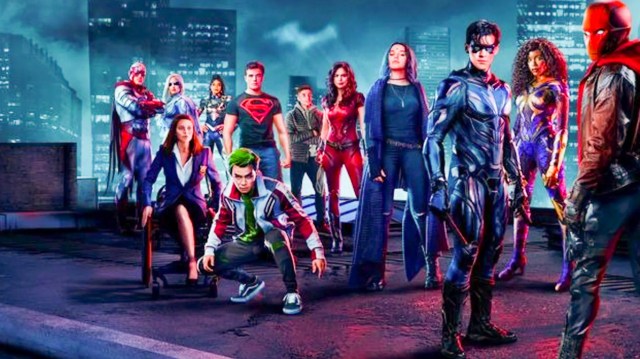 A new set photo hints that we could be getting a crossover between DC’s Titans and DC’s Stargirl. The series are set on different Earths, per the Arrowverse’s Crisis on Infinite Earths crossover between The Flash, Arrow, Supergirl, Batwoman, and DC’s Legends of Tomorrow. Of those shows, only The Flash has survived The CW’s purge, and it’s going on its ninth and last season.

A report from DC Direct confirmed that Blue Valley High School featured in Stargirl was spotted in the Titans set. Stargirl stars Courtney Whitmore (Brec Bassinger) and her team of new Justice Society of America members, who fight the villains in Blue Valley, Nebraska. The signage is comparable to Stargirl‘s series, which could mean that the heroes will meet for the first time in Titans season four, and rumors are circulating that Doom Patrol (starring Brendan Fraser) could be joining the mix.

Although all three shows were given cameos during the Crisis on Infinite Earths event, they weren’t part of the main story, only featured at the end with their respective Earths labeled. Titans is on Earth-9, Stargirl is on Earth-2, and Doom Patrol is on Earth-23.

These particular shows were part of DC Universe’s original streaming app before it changed into the comic-exclusive DC Universe Infinite. Titans and Doom Patrol went directly to HBO Max, while Stargirl released simultaneously on the DC Universe app and The CW. This distinction from the main Arrowverse could further indicate the possible crossover.

In season four of Titans, the team of heroes will be fighting the dark cult leader Brother Blood (Joseph Morgan) and Superman supervillain Lex Luthor (Titus Welliver), and they could use the extra assist to defeat him. The versions of the heroes could be ones based on the Titans’ Earth and not their own, which is something these shows have done before. Original Flash star John Wesley Shipp has appeared in The CW’s Flash and Stargirl as the speedster Jay Garrick, and in season one of Titans, they encountered a different version of Doom Patrol.

This crossover hasn’t been confirmed, but it would be exciting for any DC fan to see the Titans, Stargirl, the new JSA, and Doom Patrol team up for the first time. Here’s hoping these rumors turn out to be true.