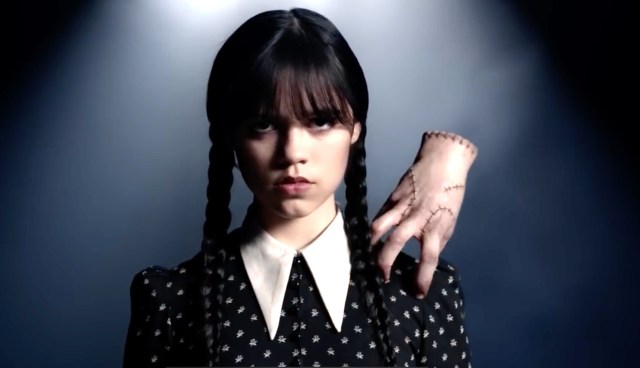 Jenna Ortega is unequivocally one of the brightest faces in the horror genre — and, apparently, she is continuing her impressive reign in the spooky world with her upcoming role as Wednesday Addams in Tim Burton’s Wednesday series, which she has displayed beautifully in a new promo image for the Netflix phenomenon. As folks have been made aware, Ortega will be portraying the series’ titular character, with the comedy/horror set to showcase Wednesday’s coming-of-age tale through the eyes of the ever-popular character herself.

The aforementioned image (per Collider), which you can view for yourself down below, depicts Ortega donning Wednesday’s iconic gothic appearance — including her black hair, collared clothing, and nails. Ortega’s arms are also crossed in a coffin-esque position, which further establishes the show’s spooky vibe and borrowed inspiration from The Addams Family franchise.

As if eagle-eyed subscribers weren’t already excited enough about the upcoming project — specifically because of goth king Tim Burton under center — then the newest image will surely give folks a taste of the new series’ authenticity that will allow Ortega to perfectly shine in the role. And based on the looks from the official teaser, the long-awaited series will reach darker heights that have yet to be seen in past films from the franchise — which includes Addams Family veteran Christina Ricci joining the star-studded cast.

Netflix’s Wednesday has yet to announce an official release date, though it’s likely that the series will arrive on the streaming giant around Halloween later this year.