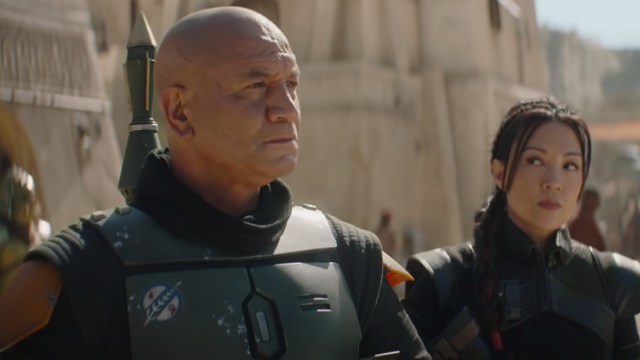 Boba Fett is one of the most popular characters in Star Wars canon, but that doesn’t shield him from criticism.

In fact, no one is safe from the notoriously toxic Star Wars fanbase. Fett’s return as a former bounty hunter and current criminal overlord in The Book of Boba Fett was quickly the target of ridicule, as the fanbase came to terms with the fact that actors age. They’ve largely moved on from this absurd criticism in the months since The Book of Boba Fett concluded, but a new nitpick has since arisen on Reddit’s dedicated Star Wars sub.

This time, fans are taking aim at Fett’s armor, which he inherited years ago from his bounty hunter father, Jango Fett. The armor’s been through a lot by the time it crops up in The Book of Boba Fett, including a run in with a Sarlaac and a lengthy stint with both Jawas and Cobb Vanth. The chipped beskar still fits Fett just fine, thankfully, but its less-then impressive area of coverage caught one fans’ eye.

Soon, user WittenEd had taken their observations to Reddit, where they noted that Boba must not be afraid of “heavy gunfire,” considering how small his armor plates are. They included a picture of Fett standing off against a storm trooper, and showcasing the surprisingly small amount of coverage his armor provides. The plate across his chest does cover his vital organs, but massive gaps down the sides—as well as on the arms, belly, and even around the neck—seem to leave far too many options for enemies.

The image showcases, once again, one of the many complaints that Star Wars fans had about The Book of Boba Fett—namely, that Temuera Morrison has aged in the 20 years since he last appeared in a mainstream Star Wars role. The 61-year-old actor isn’t quite as slim as he used to be, something that’s entirely normal for a man in his 60s, but that quickly sparked vicious jokes from the fanbase. Past the common jokes dubbing him “Boba Fatt,” people also managed to worm in some Game of Thrones references, proclaiming that Boba could use “the breastplate stretcher” utilized by King Robert Baratheon.

Not all of the comments poked fun at Morrison’s brave decision to, you know, age like a normal human, and instead leaned into Boba’s notorious history as a genuine badass. One commenter noted that “his armor covers all the vital parts on the upper half,” but more armor isn’t necessary, because “the rest is cover[ed] by his enormous balls.”

A few experienced soldiers also chimed in with their two cents, noting that Boba’s stance is actually perfect for the amount of armor he has on. Apparently, the military will train its soldiers to “square up” with your “chest out front.” This way, “if you get hit center of mass, better to hit the plate than have it shred through the sides of your body.”

Another noted that the armor “covers the vitals without impeding movement,” something that Boba likely found quite helpful during his many trials in The Book of Boba Fett. Perhaps the best response came from user Phreequencee, however, who celebrated Boba’s “dad bod” and pointed out that “Boba is Space Dad,” but “you don’t need to touch the thermostat cuz he’ll turn up the heat.“

Perhaps most importantly, Boba often finds himself pitted against the notoriously shoddy shots of storm troopers, so he’s really got nothing to worry about. Between his stellar team of warriors, assassins, and cyborgs—not to mention his trained Rancor—the man we see in The Book of Boba Fett hardly needs that armor at all.