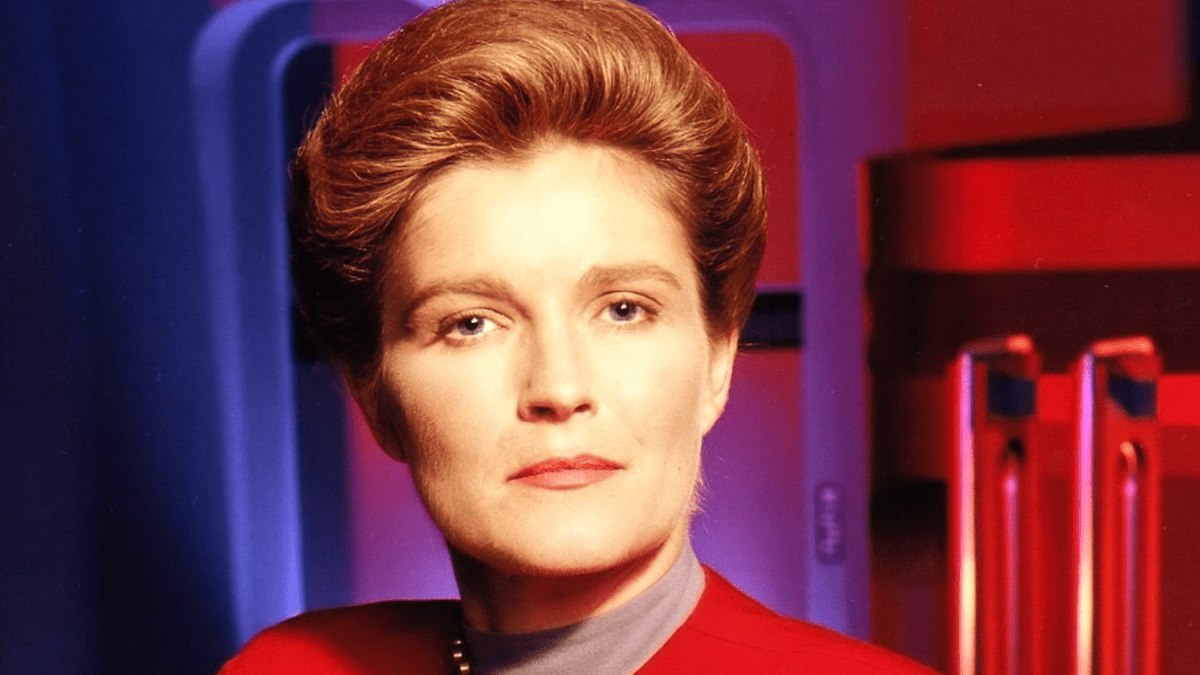 Star Trek: Voyager may have concluded in 2001, but it continues to gain new fans to this day, and is the most streamed Trek series on Netflix.

Heading all seven seasons was the superb Kate Mulgrew as Captain Kathryn Janeway. Voyager is Janeway’s first big command, and in the season one opener, the ship is hurled 70,000 light years into the distant Delta Quadrant of the galaxy. Over the course of 172 episodes, she must use all her strength, determination, and cunning to get her crew home.

Here are all the reasons why Janeway is the greatest Federation Captain in the Star Trek franchise.

Janeway is the only Starfleet Captain who doesn’t have a massive support and supply network backing her. She can’t call up an admiral for orders if things get difficult. Out in the Delta Quadrant, Janeway is representing the whole Federation, and she must often play the roles of both diplomat and soldier.

In the two-part episode “Year of Hell,” Janeway’s devotion to her crew and her unshakable will are tested to their limits. Engaged in constant skirmishes with the Krenim Imperium, Voyager becomes little more than a floating wreck. Janeway is still determined to get what’s left of her people home any way she can. Her final act is to ram a powerless Voyager into the Krenim flagship in the vague hope it will restore the timeline.

Throughout the show, Janeway also displays a good measure of physical toughness. In the season 3 episode “Macrocosm,” she strips down to a vest Lara Croft-style and grabs a phaser rifle to fight super-sized microbes infesting the ship.

Throughout Star Trek: Voyager, Janeway follows a “Delta Quadrant” version of the Prime Directive, bending the rules (and occasionally breaking them) to get things done.

From episode one, Janeway is forced to merge two hostile crews together – Federation and Maquis. In the process, she earns the respect of both. Her early decision to promote the volatile Maquis warrior B’Elanna Torres to chief engineer ranks as one of her all-time best. B’Elanna may not have been straight-laced Starfleet material, but she was clearly the best engineer on the ship. Things don’t always go smoothly. B’Elanna often disobeys orders and sometimes fights with other crewmembers, but Janeway always has the foresight to support her.

Perhaps one of Janeway’s most controversial decisions ever was to forge an alliance with the murderous Borg to fight the even more murderous Species 8472. This decision leaves many of the crew reeling, including First Officer Chakotay, but she knows it is the only way they have hope of crossing Borg space and getting her people closer to Earth.

And in the final feature-length episode, an older Admiral Janeway risks everything by ignoring the Temporal Prime Directive to get her crew home 16 years quicker, meaning she did the impossible and got her people back… twice.

…but she still has principles

In many ways, Janeway’s decision to strand Voyager in the Delta Quadrant in the first place is her most moral, putting herself and her ship at risk to save a group of oppressed aliens. The decision leaves her racked with guilt, and from this point on she will bend the rules as far as she can to reach Earth.

In the episode Equinox, Janeway is forced to confront Captain Ransom. Like Janeway, he is a Starfleet Captain stranded in the Delta Quadrant. But unlike Janeway, he has abandoned every principle the Federation holds dear, murdering innocent creatures to power his ship. Janeway loses it and pursues Ransom almost to the point of obsession. Part of Janeway’s rage is directed at herself – Ransom is the Captain she could have turned into had she given in completely to her desire to get her people home at any cost.

Her obvious romantic attraction to Chakotay is a running theme. In the episode Resolutions, Janeway and her First Officer are stranded on an idyllic planet with little hope of being rescued. As the days go on, the relationship between them becomes less and less formal (Chakotay even builds her a bath). Just as they are about to become intimate, Voyager unhelpfully shows up. Janeway literally puts her uniform back on and heartbreakingly tries to forget the whole thing.

Janeway’s mother/daughter relationship with ex-Borg drone Seven of Nine blinds her to some of Seven’s less-than-perfect qualities. In the episode “Prey,” Seven coldly murders a wounded alien to protect the ship. Any other crewmember would find themselves completing the rest of the journey in the Brig, but Janeway instead administers a firm slap on the wrist.

And people die under Janeway’s command. As Captain, she knows those deaths are ultimately her fault, and she must live with that. In earlier Trek series, Kirk and Picard seemed to brush off the emotional damage of most redshirt fatalities minutes after they occurred. Not so with Janeway.

She struggles with caffeine addiction

No one on Voyager would have made it home alive were it not for a certain hot beverage. Janeway’s demand for caffeine begins in season one and only grows with time. She drinks it in her quarters, in the mess hall, and even on the bridge. When Mr. Neelix jokingly offers her an injection of coffee straight into her bloodstream, you can see she’s seriously considering it.

Her performance suffers when the limited supply situation deprives her of the drug and she is forced to consume Neelix’s inferior substitutes. And when stocks run low, it even affects her command decisions. In one episode, she takes Voyager wildly off course because “there’s coffee in that nebula.”

She has some epic one-liners

Throughout the show, Janeway displays lightning-fast wit. When the Borg confronts her with their familiar catchphrase “you will be assimilated,” her response is “not today and not by you.”

And when Janeway finally gets a man (albeit a holographic one), she discovers he is already married. Her response is straightforward: “Computer. Delete the wife.”

Scientific Method sees the crew tortured by a group of unethical alien scientists. When Janeway decides the best course of action is to pilot Voyager into a sun to get rid of the creeps, she tells them that “these lab rats are fighting back!”

In the final episode, she manages to convince a past version of herself to rip up the entire Temporal Prime Directive with the simple words “Seven of Nine is going to die.”

Perhaps the finest Janeway one-liner is when she is about to ram Voyager into the Krenim time-ship. Before the vessels collide, she just manages to shout, “time’s up!”