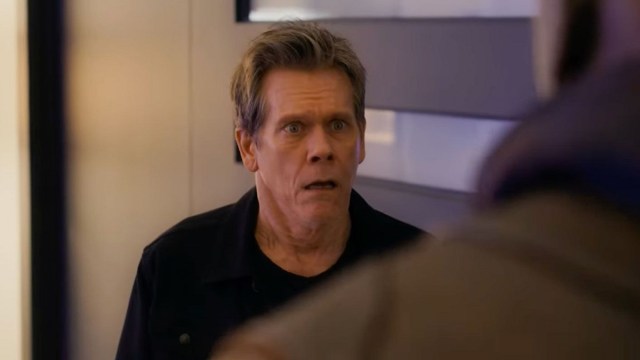 Ever since Kevin Bacon was first name-dropped in Guardians of the Galaxy, there was an air of inevitability surrounding the actor’s eventual involvement in the Marvel Cinematic Universe franchise.

He couldn’t play a fictional character, though, after it was firmly established that the star of Footloose was a very real person within the context of the mythology, leaving only one option. After David Hasselhoff made a surprise appearance in Vol. 2 and Bacon was mentioned again in Avengers: Infinity War, you could have bet your house on the actor turning up eventually.

In a fantastic meta twist, the driving force behind the plot of James Gunn’s The Guardians of the Galaxy Holiday Special finds Drax and Mantis heading to Earth to acquire the perfect Christmas present for Peter Quill, which just so happens to be the man himself. Speaking to Entertainment Tonight, Bacon opened up on finally getting to pay off one of the MCU’s longest-running gags.

“”I’ve been researching this role for 64 years now. I’ve done quite a few things where I played myself, both in films, but also in commercial spots and stuff like that. And I take my work really, really seriously, but I don’t take myself really, really seriously. So to be able to poke fun at yourself… it’s just a blast. I love this kind of heightened idea of what my life is and like, for instance, the house that I have, I can guarantee you that my house doesn’t look anything like that house.

I went to the theater opening weekend, having worked with James Gunn — we had been in touch and he never warned me that this was coming. I had no idea, and I sat there and all of a sudden they’re talking about me and my jaw just dropped.” These movies are so much a part of the fabric of entertainment. Not only the movies, you know, the comic books, the whole world…. To walk on to that set and to see the kind of beautiful machine that is making these things was really exciting.”

It’s been almost a decade in the making, but the Guardians of the Galaxy will finally cross paths with Kevin Bacon less than 48 hours from now, and it would have been a crying shame were James Gunn’s association with Marvel to end without making it a reality.