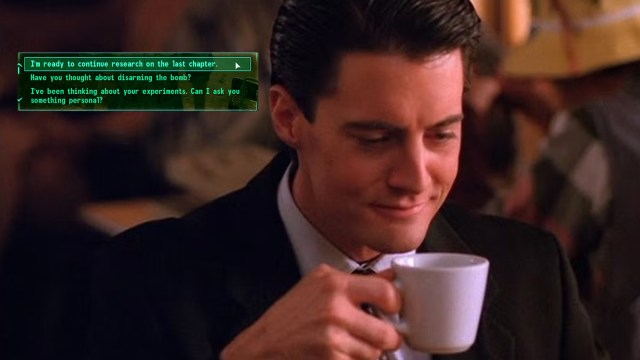 Twin Peaks star Kyle MacLachlan has joined Amazon Prime’s Fallout TV series, which is incredible casting if you ask us.

According to Variety, MacLachlan, along with Xelia Mendes-Jones (Havoc, The Wheel of Time) and Aaron Moten (Disjointed, Father Stu) will be series regulars on the show. Yellowjackets star Ella Purnell and Walton Goggins (The Righteous Gemstones, The Hateful Eight) will play the lead roles in the series.

Purnell, MacLachlan, Mendes-Jones, and Moten’s characters have yet to be revealed. But fans reckon MacLachlan could play a bunch of different characters from Fallout: New Vegas. In February, Variety also said in a report Goggins will play a ghoul in the series.

Little is known about Amazon’s adaptation of Bethesda’s iconic video game franchise. But the TV show is reportedly set in a nuclear apocalypse in a near future with relics of a 1940s America. Sound familiar?

Most of the games in the Fallout franchise begin with the player emerging from a vault and discovering the devastating and barren wasteland and its quirky inhabitants. So it’s likely we could find the show begins in a similar fashion from the perspective of Ella Purnell’s character.

Production for Amazon’s Fallout series is scheduled to begin later this year. The series is being produced by Amazon Studios in association with Bethesda Game Studios.