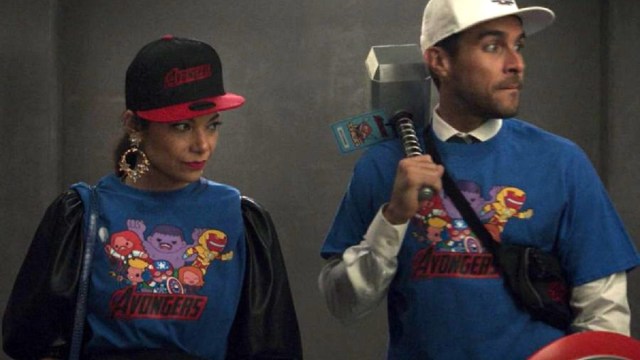 Ever since She-Hulk: Attorney at Law first premiered on Disney Plus, fans have stuck around during the credits for more than one reason. Not only did the first three installments drop an additional stinger, but the animated portion of the ending sequence has also thrown up plenty of hints, nods, winks, and Easter Eggs for eagle-eyed Marvel Cinematic Universe supporters.

One of them had fans questioning whether or not the design team had made a mistake, with an image showing Tatiana Maslany’s Jennifer Walters holding up a mug in an evidence bag that said “Avongers”. Was this an oversight? A simple spelling error? Or a tease for something much greater? Incredibly, it turned out to be the latter.

As we discovered yesterday, Jennifer Walters was set up with a bespoke superhero tailor, but before that, her associates Pug and Nikki were forced to part with some cold, hard, cash. Not for a bribe or anything, but to purchase bootleg merch that was plastered with the Avongers logo, including some off-color recreations of Earth’s Mightiest Heroes and their signature outfits.

In a fantastic spot of cross-promotional marketing, the official Avengers account on Twitter has opted to show solidarity with She-Hulk by not only changing its name to Avongers, but updating its bio to reflect the team’s status as Earth’s Toughest Heroes.

She-Hulk has been dazzling viewers with its offbeat brand of comedy, even if the review-bombers and trolls have yet to recede into the distance, but you can’t help but crack a smile at the sheer lengths the creative team have gone to in order to come up with fresh and funny gags. Avongers Assomble, indeed.