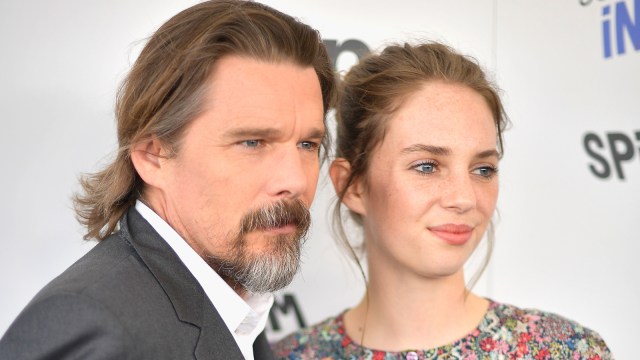 The Hawke family has kind of owned streaming this year as two members of the acting dynasty have appeared in a couple of 2022’s biggest TV shows. While Maya Hawke reprised her fan-favorite role as Robin Buckley in Netflix’s Stranger Things, her multi Oscar-nominated father Ethan Hawke joined the MCU in Disney Plus’ Moon Knight. And it turns out his daughter had a hand in convincing Hawke to take the plunge into the Marvel universe.

While reflecting on where his career is at in an interview with Indie Wire, the Dead Poets Society icon revealed that it was a challenge Maya set him that led Hawke to become more open to the idea of boarding a big franchise like Marvel. A conversation with good pal Oscar Isaac later and the role of Moon Knight‘s main villain Arthur Harrow was his. The actor explained:

“Maya would say to me, ‘Why are you sitting on the outside and telling everyone their sandbox is bad? Why don’t you go into their sandbox, play with them, and show them what you have to offer?’ I said to Oscar Isaac, ‘We’ve got to go play in Marvel’s sandbox and try to do what we do. We don’t have to change Marvel. We just want to show them what we’re capable of doing and see if they find it interesting.’ So we had a lot of rehearsals and worked on things a lot. We had a really good experience.”

Isaac has previously told this story from his own perspective, revealing that he initially pitched Marvel the idea of Hawke playing Harrow as he had a feeling that he could convince his friend to join the project. As it happens, it looks like he had some insider help from Maya Hawke. Whether the pair were secretly in cahoots, we don’t know.

Now that he’s part of Marvel, it seems Hawke has caught the Disney franchise bug as he’s since stressed that he’s desperate to travel to the Star Wars galaxy. Maybe if Isaac gets himself a Poe Dameron Disney Plus series, the two pals could work together on that again. Otherwise, Stranger Things fans would no doubt love to see two generations of Hawkes share the screen in the final season of the Netflix hit.

Ethan Hawke can currently be seen in horror The Black Phone. Maya Hawke, meanwhile, is appearing with her mother Uma Thurman in upcoming black comedy thriller The Kill Room.