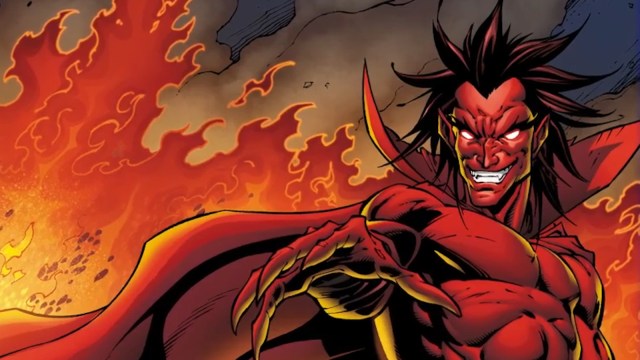 The chatter never really stops when it comes to Marvel and who will be joining the illustrious MCU; this time word on the street is that one of the villains everyone has been waiting for may finally make a move and enter the upcoming Ironheart series. The news comes amid further rumors that Sacha Baron Cohen is tipped to join the series, though nothing has been confirmed.

Fans have been waiting to get a look at the comics’ most dastardly demonic villains since WandaVision aired, with many believing that Mephisto was behind everything going wrong, when in fact it was Agatha all along. Keen-eyed Marvel stans have been so sure the MCU was dropping hints all over the place since then, with many believing there was a nod to him in the form of a stained glass window in Loki.

Beyond that, fans also thought that Doctor Strange’s behavior in his recent cinematic outing was something to do with it, or that Madisynn may have met the devil himself in She-Hulk: Attorney at Law.

You would think after getting your hopes up only to have them dashed so many times would cause people to stop going so hard on the speculation, but you would be wrong. It would seem that the latest target is Baron Cohen’s rumored appearance in Ironheart, with Deadline reporting that they have received further proof that the actor will be joining the series.

This proof has even allowed them to speculate which episodes he will appear in, believing episodes five and six to be most likely.

On top of this, they also report that the actor may have undergone scans for CGI effects on top of in-person scenes which may point to his character having two different forms, possibly a human disguise and a more devilish real countenance.

However, Marvel and Baron Cohen’s own reps have declined to comment on the rumors. With fans waiting so long for the dastardly demonic presence in the MCU, this may be the closest they have come so far to seeing that dream realized if there is any truth to these reports.

Dominique Thorne stars as RiRi Williams/Ironheart in the series though her character will first be introduced in the upcoming Black Panther: Wakanda Forever movie. Anthony Ramos is cast as Parker Robins a.k.a. The Hood, a friend of Williams who owns a magical hood that allows them to utilize dark arts and magic. Some now speculate that this hood is actually bestowed upon Robins by Mephisto, so if we do see a certain Baron Cohen getting close to Ramos on screen, eyebrows will raise.

Then again, Marvel has been known to throw us for a loop at times so perhaps this news has been dangled before us to throw us off the scent. Who knows? Only time will tell with Ironheart set to air on Disney Plus in late 2023, perhaps it will put these long-running Mephisto rumors and speculations to bed once and for all.