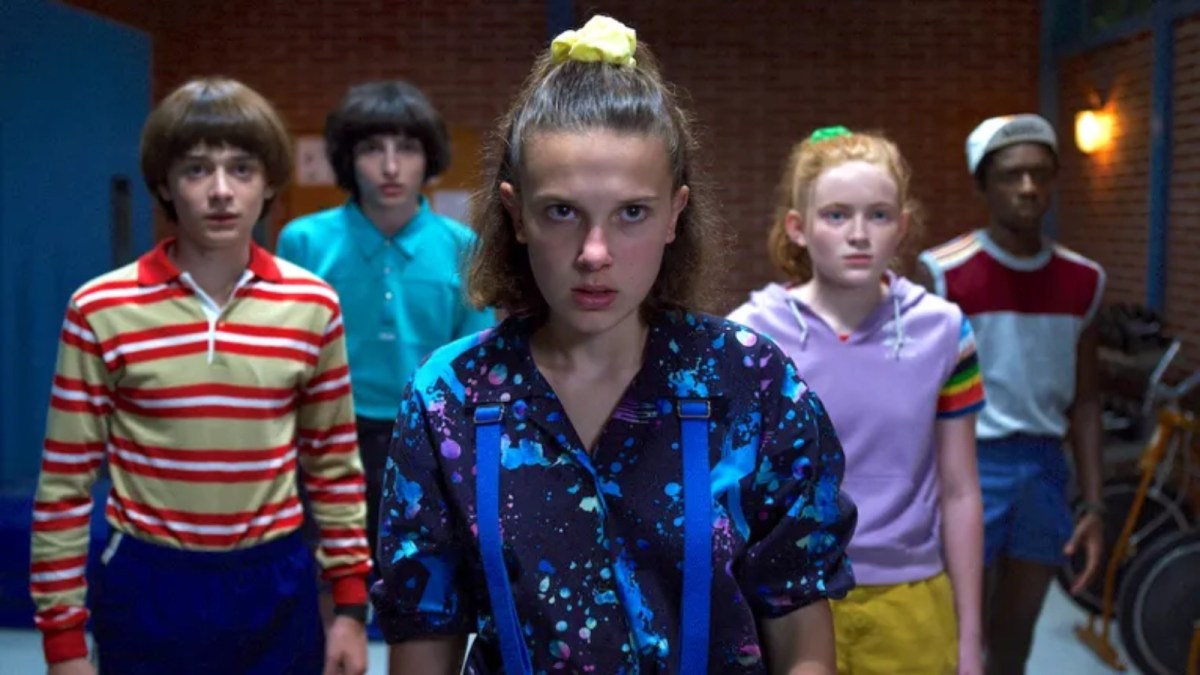 Sure, Stranger Things is one of the most popular shows ever. And sure, all of its cast are pop culturally iconic, but just because they’re in the one of the biggest show ever doesn’t mean that’s all they do.

In fact, quite a few of the cast members have had pretty prolific careers outside of the show, with Millie Bobby Brown being the easiest example. Also, David Harbour is a Marvel character and Finn Wolfhard appeared in a Weezer video.

So, let’s take a look at where else you can watch the vaunted cast outside of Hawkins, Indiana.

Brown is unequivocally the biggest breakout star from the show. While the show put her into the Hollywood stratosphere, she was actually in a few shows here and there before that show even premiered in 2016.

She played a young Alice in Wonderland in the 2013 ABC show Once Upon a Time in Wonderland for two episodes in 2013. The following year, she played Madison O’Donnell in The Intruders, a show about other people’s souls invading new bodies.

She appeared in an episode of NCIS in 2014 called “Parental Guidance Suggested” and the following year in Modern Family and Grey’s Anatomy. Next came Stranger Things, which is when Brown’s career really took off.

In 2018, she was featured in the Darren Aronofsky VR project Spheres: Songs of Spacetime and the following year she played Madison Russell (second time she’s played a Madison) in Godzilla: King of the Monsters. In 2020, she played one of her signature roles for the first time: Enola Holmes.

That same year, she played herself in Mariah Carey’s Magical Christmas Special. In 2021 she reprised her role as Madison Russell for Godzilla vs. Kong. This year, she starred in Enola Holmes 2. She also has two upcoming movies: one is called Damsel, where she plays Princess Elodi and in The Electric State she plays Michelle.

She’s also done some non-film stuff as well. She played herself in The Sims 4, well not played but you can play as her. She’s appeared in five music videos since 2016. Those are “Find Me” by Sigma featuring Birdy, “I Dare You” by The xx, “Girls Like You” by Maroon 5 featuring Cardi B, “In My Feelings” by Drake, and “Happy Anniversary, All I Want for Christmas Is You” by Mariah Carey.

The 47-year-old David Harbour has been puttering around the edges of Hollywood since the early 2000s, but obviously Stranger Things took his career to a whole new level. Because he’s been around so long, he has a filmography about as long as a Lord of The Rings book.

Let’s start with TV. The first decade of the 2000s saw Harbour doing a number of guest spots on shows like Law & Order, Law & Order: Special Victims Unit, Law & Order: Criminal Intent and, well, you get the picture.

From 2010 through 2016, he appeared in shows like The Newsroom, State of Affairs, Banshee, and Elementary. Post Stranger Things, he appeared in an episode of Drunk History as a Vietnam Memorial Head, he hosted Saturday Night Live, he appeared in The Simpsons, as well as the animated shows Q-Force, and Star Wars: Visions.

Harbour’s movie career stretches back to 2004, when he starred as Robert Kinsey in the sex therapist movie Kinsey. In 2005, he appeared in Brokeback Mountain and the Tom Cruise vehicle War of the Worlds. Other notable roles include parts in Revolutionary Road, Quantum of Solace, State of Play, The Green Hornet, and The Equalizer.

Things got a bit more visible following 2016, when he appeared in Suicide Squad as Dexter Tolliver. Next came Sleepless in 2017 and Human Affairs in 2018. He headlined a new version of Hellboy in 2019 and played a character named Gaspar in 2020’s Extraction.

Last year, he played the Red Guardian in Black Widow and he’s currently starring in the gory Christmas revenge movie Violent Night. He’s set to appear in Gran Turismo next year. On top of all this, Harbour regularly performs live theater, and has been since 1999.

There’s too many plays to list, but he’s done big ones like Hamlet, Romeo and Juliet, Glengarry Glen Ross, and this year he appeared in the hit Mad House.

Finn Wolfhard initially rose to prominence after Stranger Things, but he’s been acting professionally since 2013. His movie roles really took off after the show aired. In 2017, he appeared in the Stephen King classic It. The following year, he appeared in Dog Days and Howard Lovecraft and the Kingdom of Madness.

In 2019, he appeared in three movies: It Chapter Two, The Goldfinch, and The Addams Family (as the voice of Pugsley). He was also in three movies the following year: The Turning, Omniboat: A Fast Boat Fantasia, and a short film called Rules for Werewolves.

He was in Ghostbusters: Afterlife in 2021 and Pinocchio, along with When You Finish Saving the World earlier this year.

As for TV, before Stranger Things, he was in The 100 as Zoran and Supernatural in the episode “Thin Lizzie” as Jordie Pinsky. In 2017, he was featured on Lip Sync Battle with the rest of the cast of Stranger Things and he was a cast member for the Carmen Sandiego reboot from 2019 to 2021.

He’s in a band called The Aubreys and filmed a number of videos with them as well. His most visible music video appearance was in 2019, when he starred in the video for Weezer’s take on the classic Take On Me. And it feels like he’s still just getting started.

The 20-year-old Sadie Sink first appeared in the second season of Stranger Things, and her career took off from there. Before becoming a TV star, Sink played Annie on Broadway, as well as Queen Elizabeth II in The Audience.

She’s appeared in the TV shows The Americans, Blue Bloods, American Odyssey, and Unbreakable Kimmy Schmidt – all before her Stranger Things role. Her feature film debut came in 2016 with the sports movie Chuck.

In 2017, she appeared in The Glass Castle, and this year. she’s in the Oscar-bait Brendan Fraser comeback film The Whale. Her career gets bigger every day, or so it seems.

Caleb McLaughlin is 21 years old and started his career on Broadway as Young Simba in The Lion King. From there, he made various TV appearances in shows like Law & Order: Special Victims Unit, Unforgettable, Forever, and What Would You Do?

Like Sink, he appeared in the show Blue Bloods and post the premiere of Stranger Things, he played Ricky Bell in The New Edition Story and Mo-Slo in The Boys Presents: Diabolical. As for movies, he played Darius in the 2019 film High Flying Bird and Cole in Concrete Cowboy.

He currently has three movies coming up: Shooting Stars, The Deliverance, and The Book of Clarence. It seems he’s just as busy as the rest of the “kids” cast.

Of all the characters in the show, it’s hard to name someone who has it worse than Will. In the first season, he had to hide from demons the whole time, and in the acclaimed second season, he was seemingly possessed. Out of everyone, he probably has the least additional credits, but the projects he does pick are generally quality.

Before Stranger Things, he appeared in Bridge of Spies and voiced Charlie Brown in The Peanuts Movie. In 2018, he played Otis in We Only Know So Much and Kai in The Legend of Hallowaiian.

In 2020, he played Tommy in the Adam Sandler movie Hubie Halloween and he appeared as himself in the documentary Where Are You, Charlie Brown? He’s also going to appear in the upcoming film The Tutor.

He also appeared in Drake’s “In My Feelings” video as well as “LA Devotee” by Panic at the Disco. He also has a massive social media following.

Gaten Matarazzo is maybe the most recognizable character from the show after Eleven. Like his castmate McLaughlin, he also got his start in Broadway as Benjamin in Priscilla, Queen of the Desert.

His filmography is short but notable. In 2019, he voiced Bubba in The Angry Birds Movie 2. He played Michael Dipnicky in the Hulu film Honor Society and voiced Boris the Dragon in My Father’s Dragon.

He also hosted the show Prank Encounters from 2019 to 2021, and for some reason, he appeared in the video for Green Day’s “Meet Me On The Roof.” He also continues to do Broadway and will appear as Tobias Ragg in Sweeney Todd: The Demon Barber of Fleet Street in 2023.

If anyone’s career is about to go off, it’s probably Joe Keery’s. The 30-year-old actor has the looks, charm and acting chops to really make an impact. He’s been in a few movies over the years including Molly’s Game, Slice, and Spree.

His most famous role after Harrington is as Walter McKeys in the smash hit Free Guy. He has a huge upcoming role in the latest season of Fargo. He’s also a musician and performs as Djo.

The awesome Natalia Dyer appeared in the comedy drama Yes, God, Yes in 2019 and had supporting appearances in Things Heard & Seen from 2021 and Velvet Buzzsaw from 2019. Her film career stretches back to 2009, when she appeared in Hannah Montana: The Movie.

She hasn’t done any major TV stuff since Stranger Things, but she did appear in the music video for “Wild Love” by James Bay.

She has two films coming out in the near future: Chestnut, where she plays Annie and All Fun and Games.

Actress, singer and model Maya Hawke is the daughter of actors Ethan Hawke and Uma Thurman. Like Keery, she’s also a musician. She’s appeared in the movies Once Upon a Time in Hollywood, Fear Street Part One: 1994, and Do Revenge.

She has a number of movies coming out, including Asteroid City, Maestro, The Kill Room, and Revolver. Her TV roles include Little Women (BBC), The Last Movie Stars, and Marvel’s Moon Girl and Devil Dinosaur. She has also released two studio albums: Blush and Moss.