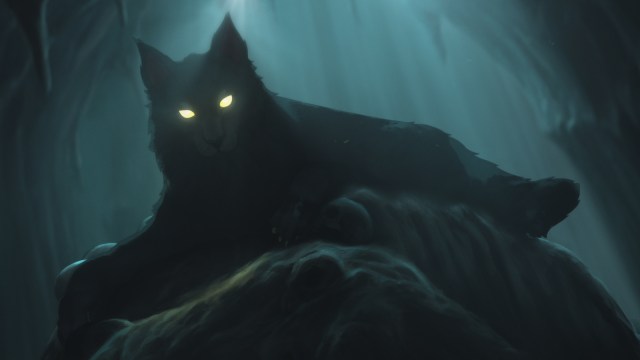 In what might be one of the cheekiest moves in TV history, Neil Gaiman and Netflix have conspired to drop a completely unexpected bonus episode of the network’s new hit adaptation of Gaiman’s The Sandman, containing wildly different adaptations of two of the standalone issues of the original comic. And Gaiman has just taken to Twitter to reveal the voice cast of the first tale, “A Dream of a Thousand Cats,” the series’ first animated offering.

While the first part of the episode, “Calliope” is filmed in the same familiar live-action style of the series, “A Dream of a Thousand Cats” is animated ad features a star-studded cast that includes two of Gaiman’s most popular collaborators. Just as he did when announcing the primary cast of the series, Gaiman has put together a visual aid showing all the actors cast in the animated project.

One of the bigger reveals is that Gaiman himself plays one of the parts in the episode, that of Crow/Skull Bird — surprisingly, Gaiman made no cameo in the series proper so it’s fitting that at least his famously mellifluous voice gets a share of the onscreen spotlight. Joining the author/showrunner is A-lister James McAvoy as The Golden Haired Man. This isn’t McAvoy’s first Sandman rodeo, either. He played Dream himself in the acclaimed audio production of The Sandman: Act II by Audible.

But two stars will be more than recognizable — even in voice only — to longtime fans of Gaiman’s screen adaptations. David Tennant and Martin Sheen, who played the Demon and Angel protagonists of Prime Video’s adaptation of Gaiman’s Good Omens, play the characters Dan and Paul, respectively. Tennant’s wife, Georgia Tennant, who co-starred with both her husband and Sheen in the six-part BBC One comedy Staged, filmed during the UK’s COVID-19 lockdown, appears in the story as well as Laura Lynn.

Other cast members include Killing Eve‘s Sandra Oh as The Prophet and UK comedian Joe Lycett as The Black Cat. Tom Sturridge, naturally, returns to again play the role of Dream in his feline aspect. Also featured are Nonso Anozie as the Wyvern, Diane Morgan as the Gryphon, and Tom Wu as the Hippogriff. These three mythical creatures traditionally guard the gates of Dream’s palace in The Dreaming, so it’s likely that we may hear their voices again once Netflix green lights the all but inevitable second season.

“Dream of a Thousand Cats/Calliope” is currently available to stream on Netflix.