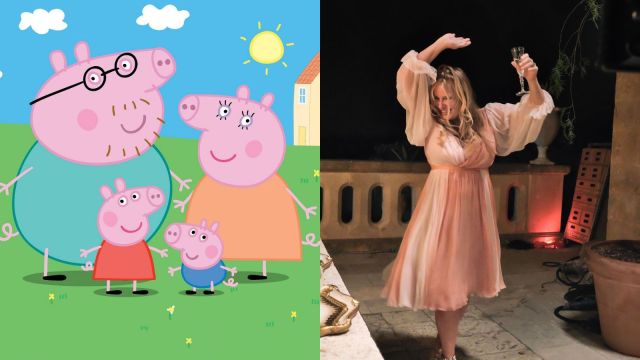 Great news for fans of children’s entertainment and comedy anthology enthusiasts, who’ve previously had to struggle with little-to-no crossover. Birthed out of a truly brutal sledge of its Emmy-winning star Jennifer Coolidge, we can now safely say Peppa Pig exists within The White Lotus.

The repercussions of such a reference are still to be fully felt, for all we know The White Lotus universe has Peppa Pig as an authoritarian dictator or an Elon Musk-like terrible billionaire. For Coolidge, it’s an utter spray. Fans of the series are thoroughly enjoying the crossover, with memes flowing in.

The resemblance is uncanny, with many predicting the Halloween costumes next year will be filled to the brim with Coolidge x Peppa cosplays. It’s certainly better than dressing up as Jeffery Dahmer or Jim Jones, and it doesn’t involve bringing up trauma for any survivors! Frankly, it’s a net win. Unless we’re right about dictator Peppa Pig, which feels entirely possible.

The White Lotus dominated the Emmys in 2022, winning ten awards in the limited series category for its writing, direction, and its astonishingly stacked cast. Starring Alexandra Daddario, Jake Lacy, Sydney Sweeney, Murray Bartlett, and F. Murray Abraham, it feels as if it was manufactured just to win awards for accomplished actors.

The second season of The White Lotus is currently available to stream on HBO Max, at least until Peppa Pig hears word of the slander and deems it a crime against the glorious pig republic.