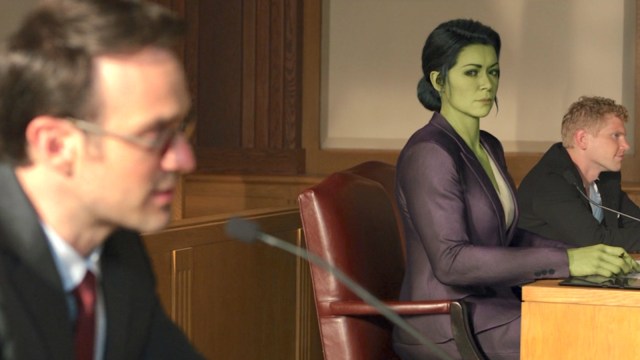 Tatiana Maslany is no stranger to the spotlight. As an actress who’s been in the industry since 1998 and the reciptment of over three dozen various nominations and awards, including a Primetime Emmy for Orphan Black, she was well equipped for the super stardom that ensued as a result of starring in Marvel’s Disney Plus series, She-Hulk: Attorney at Law. Her on-screen character, Jennifer Walters, is also no stranger to the spotlight after becoming a famous superhero and cousin to one of the original Avengers. Turns out, Maslany and Walters share two very differing opinions on the notion of privacy.

In She-Hulk: Attorney at Law’s penultimate episode, “Ribbit and Rip It,” Walters is tasked with representing Eugene Patilio, also known as Leap-Frog, who claims his suit malfunctioned as a result of negligence on the part of the manufacturer, Jacobson. Matt Murdock (Charlie Cox) rebuts Walters’ request to bring forth other superheroes whose suits were made by Jacobson as witnesses, citing the Sokovia Accords and the utmost need for privacy given their dangerous line of work. Walters likens superheroes to celebrities, citing limited claims to privacy. In the end, the judge ruled with Murdock.

The storyline between Walters and Murdock is far from over, and when asked her opinion on the two superheroes’ differing opinions on privacy, Maslany was all too keen to share her personal experience on the matter.

“I can’t help but look at things from my own point of view,” she told the Hollywood Reporter. “I’m sorry, but as an actor, what am I willing to give over? What is my responsibility to give over, and what can I keep for myself?”

Maslany, who’s done a heavy amount of press in promotion of the show, explained that she bumps into this issue frequently. One quick YouTube search reveals a host of interviews wherein yes, she is asked questions about her work, but just as frequently if not more, about her personal life. Most recently, this included a secret marriage to actor Brendan Hines in 2022. “It’s that thing of, ‘Why would anybody want to know the details of me and my life, or think that taking a picture of me is something?’”

“There’s this whole other side of being an actor, which feels incongruous with the job. It’s so much about vulnerability and stepping into another character’s life and exploring it. So Jen’s conflict with privacy and Matt’s perspective on it are very different, but that’s where my brain starts to get sparky around it.”

Maslany’s take likening acting to vulnerability is not uncommon in Hollywood, especially to those who choose method acting as their technique of choice. Nevertheless, celebrities, and not just actors, are a special breed of superheroes in this day and age, granted privileges and financial advantages otherwise withheld from ordinary civilians. Like Jennifer Walters and all the other superheroes in the MCU, celebrities lives are opened to public scrutiny. She-Hulk: Attorney at Law‘s debate on the subject ignites an age-old question of exactly how much of a their life the public is entitled to know.

If you asked Maslany, the answer would likely be somewhere between “little” and “none.”