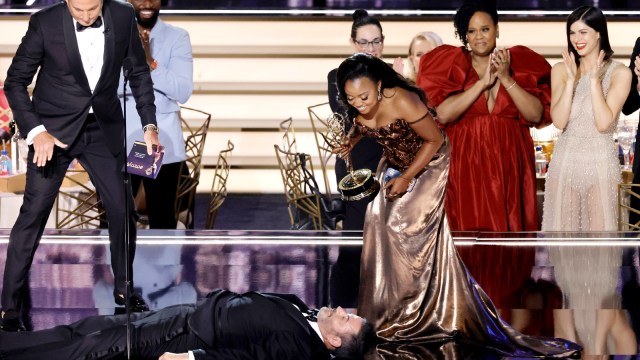 It’s Wednesday after the Emmys and somehow we’re all still talking about the dumbest thing that happened during the awards ceremony. On Monday night, while presenting Abbott Elementary star and creator Quinta Brunson with an award for best writing in a comedy series, Will Arnett did a bit in which Arnett dragged out Kimmel, who apparently had too many skinny margaritas backstage.

It wasn’t even a particularly clever bit in the first place — the gist is that Kimmel used to be overweight and now he does all this crazy intermittent fasting to stay trim — but the joke became super not amusing when the late night host refused to budge even after Arnett read out Brunson’s name. As a result, Brunson, who was the first Black woman in Emmys history to be nominated in three comedy categories in the same year, had to step over Kimmel to delivery her acceptance speech.

People were very understandably pissed, even after Brunson seemingly took the incident in stride. It’s a savvy move for her in either case, as she looks like the bigger person while the ire of the internet can deal with a certain former The Man Show host. The 32-year-old had also been set to appear on Jimmy Kimmel Live on Wednesday night, where the host is expected to apologize.

But ahead of the appearance, Brunson was asked about the incident during the Abbott Elementary panel at the 2022 Television Critics Association, and not shockingly she handled the line of questioning diplomatically, according to Variety.

“I’m anticipating that we are going to have a good old fashioned time,” she said. “I have talked with Jimmy since, and I think no matter what, it’s important to just showcase that Abbott Elementary is premiering next week. It’s gonna be a good time and you’ll probably just have to tune in and watch.”

A.V. Club staff writer Saloni Gajjar, who was also in attendance, likewise noted an anecdote about how Abbott star Sheryl Lee Ralph initially thought it was Kimmel’s sidekick Guillermo Rodriguez lying down onstage, which Lisa Ann Walter confused for the character on What We Do in the Shadows.

absolutely dying at this interaction from the #AbbottElementary panel:

Sheryl Lee Ralph: “I first thought it was Guillermo [from Jimmy Kimmel Live] lying down on the stage.”
Lisa Ann Walter: “from WHAT WE DO IN THE SHADOWS?”

But speaking of Ralph, while Brunson may have kept mum on her feelings, the Tony Award nominated actress had less apparent goodwill for Kimmel in the moment.

“I was absolutely confused. I didn’t know what was going on,” she said. “I was like, ‘I wish that man would just get up off of the ground.’ And then I realized it was Jimmy Kimmel, and I was like, ‘Ooh, the disrespect, Jimmy!’ But that’s just me.” She laughed, before sarcastically adding: “Sorry! I’m so sorry, it was lovely that he was lying on the floor during her wonderful acceptance speech!”

“I told him, too! To his face! And he understood,” Ralph continued.

Aside from the ongoing drama, the other big news of note to come from the TCA panel is that Hamilton star Leslie Odom Jr. will be joining the cast of the ABC comedy’s second season, along with actress and comedian Lauren Weedman, and Keyla Monterroso Mejia from season 11 of Curb Your Enthusiasm.