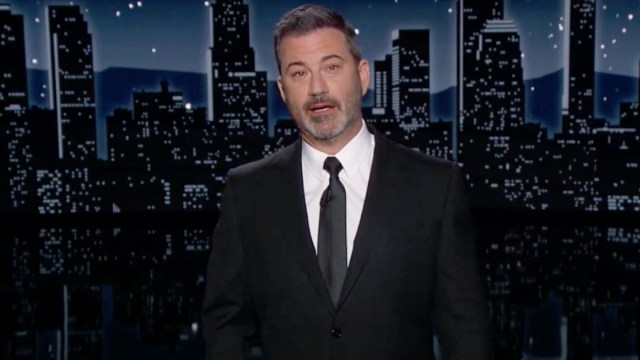 Two days after Jimmy Kimmel floored the Emmy audience on Sunday night with his poorly thought-out sketch that saw him impede upon Quinta Brunson‘s acceptance speech, he failed to address the situation upon his late-night talk show’s return.

The complete lack of mention of the incident, as if no one saw what happened, became even more strange when a comedic Emmy segment aired and Kimmel also spoke about other Emmy moments of the night, including one where he claims Andrew Garfield basically saved his life.

With Quinta Brunson scheduled to be on his show Wednesday night, it can be assumed he is saving it all for her appearance but it still doesn’t mean that not bringing it up at all during his first opportunity should go unnoticed, especially when he simply mentioned her name as one of his upcoming guests, completely ignoring the elephant in the room.

Sunday night, Kimmel became a method actor at the worst possible time, laying down on the Emmy stage, feigning unconsciousness via intoxication and refusing to move even for his friend Quinta Brunson when she was receiving her much-deserved award, forcing her to give her speech while standing above Kimmel.

It was Brunson’s first Emmy, given to her for Most Outstanding Writing for a Comedy Series thanks to her work on Abbott Elementary, but the moment was effectively tainted by Kimmel’s comedic ingenious.

Brunson, who not only wrote Abbott Elementary but is also its creator and star, was asked about the moment after the show and expressed how Jimmy has always been supportive of her during her career but also expressed that she might feel different tomorrow. She also took a light-hearted photo with him afterward where she uses her newly won Emmy to cover Jimmy’s face.

Jimmy Kimmel was also asked about it after the show and praised Quinta, though he kept up the charade about being knocked out at the time of her speech.

Kimmel has certainly been involved in his share of controversies over the last two decades, including wearing blackface multiple times, using a racial slur in a sketch, and saying that the city of Detroit will burn if the Pistons win the NBA title. He apologized many times and expressed embarrassment about his past sketches.

He is apparently not embarrassed enough about his Sunday night shenanigans to apologize during his first show since.

Now, we see if that will happen at all as the long-time talk show host apparently waits for Wednesday night to address his recent actions, or complete lack thereof, during Quinta Brunson’s speech.