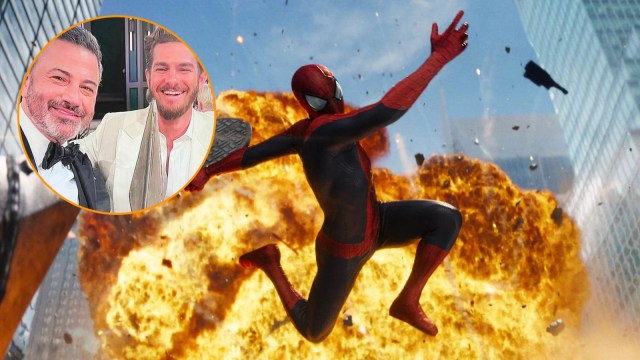 Andrew Garfield is not just an on-screen superhero, it seems. The one-and-only Jimmy Kimmel has revealed that the much-beloved Spider-Man actually saved his life at the 2022 Emmys.

Garfield attended the Emmys following his nomination for Outstanding Lead Actor in a Limited or Anthology Series or Movie for his role in Under the Banner of Heaven, apparently sharing a table with Jimmy Kimmel. Emmy winner Amanda Seyfried, Chris O’Donnell, and several stars of The Bear were also seated at the star-stacked table.

But it seems that the fun could’ve been short-lived if it weren’t for Garfield. As the dancers performed some of their opening numbers to classic TV show themes, the table found itself to be precariously close to the action. As the dancers used some prop spears, the spearhead manage to fly off straight into the head of none other than Kimmel himself, as he explained on Jimmy Kimmel Live.

“And these dancers come out with spears, and are banging the spears around, and about halfway through the tip on one of the spears comes flying off the handle, straight at us. And out of nowhere, and I swear to God this happened, Andrew Garfield lunges forward and snatches it out of the air! Like Spider-Man! Just as Spider-Man would have done, had he been in an undercover situation.”

“And of the night, the tip of the spear was still on the table,” Kimmel said, “I grabbed it off the table, and uh, here I am with the superhero.”

Kimmel then showed the audience a photo of him with Garfield and the almost murder weapon from TV’s night of nights.

It’s all perhaps very fitting in a way, with Garfield’s outfit for the Emmys highly reminiscent of webhead villain Doctor Octopus, albeit without the four mechanical arms protruding from his back.

Garfield most recently appeared as Spider-Man during Spider-Man: No Way Home, starring alongside Tobey Maguire and Tom Holland. No Way Home can be streamed from Amazon Prime Video.