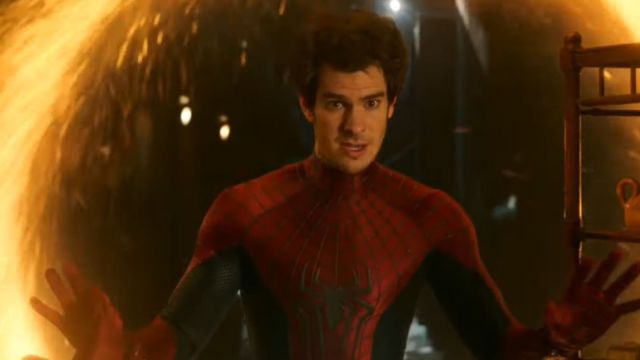 Andrew Garfield is on the hunt for an elusive EGOT at the 2022 Emmys and is determined to pick up his award tonight as a famous Spider-Man villain.

Up for ‘Outstanding Lead Actor in a Limited or Anthology Series or Movie’ for his work on Under the Banner of Heaven, Garfield has rocked the red carpet in what looks like a beautiful tribute to Spider-Man villain Doctor Octopus. Popularized by Alfred Molina’s portrayal in Spider-Man 2, Garfield’s Webhead went face-to-face with him in Spider-Man: No Way Home.

Under the Banner of Heaven sees Garfield play a detective looking into the mysterious disappearance of a mother and newborn child in the rural outlands of Utah, and gets entangled within a secluded sect of Mormonism. The series was not warmly received by members of the Church of Jesus Christ of Latter Day Saints but picked up a solid 84 percent approval rating on Rotten Tomatoes.

Garfield is currently a quarter of a way to an EGOT, following a Tony win in 2018 for Angels in America, and was close to winning his first Oscar for Tick, Tick… Boom! at the 2022 Academy Awards.

The Englishman has said he doesn’t see a return to the role of Spider-Man anytime soon, but there’s plenty of expectation he’ll pop up in Avenger: Secret War alongside Tobey Maguire’s version of the web-slinger.

Under the Banner of Heaven is available to stream on Hulu.