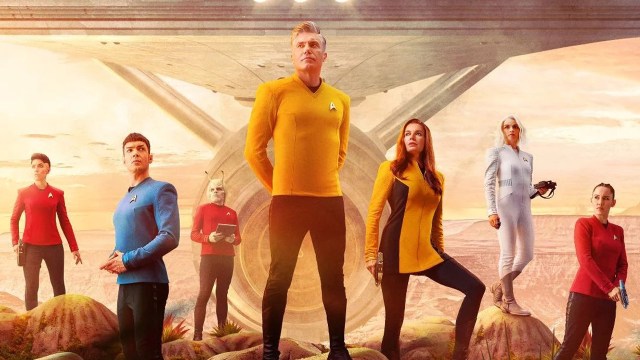 Star Trek: Strange New Worlds could not have been more of a success. Ever since Star Trek: Discovery set up a spinoff based around the pre-Kirk Enterprise crew in 2019, fans have been desperate to see such a show materialize. At long last, SNW premiered this spring and it turned out to be easily the most critically acclaimed series out of all of modern Trek. In fact, it could be argued that SNW season one was the finest Trek season there’s ever been.

So, needless to say, the hype and hunger for more episodes could not be higher. And the good news is that more is definitely on the way. Paramount Plus must’ve known they had something special on their hands as filming on season two was underway long before season one had even premiered, which means that production has already completed. That said, it’s too early for the studio to start promoting it just yet, although that doesn’t mean we don’t have some idea of what’s to come.

So what do we know about what’s next for Strange New Worlds? Here’s all the confirmed cast, plot, and release date details revealed to date.

Who will be in it?

What’s more, following his scene-stealing debut in the first season finale, The Vampire Diaries‘ Paul Wesley will return in a guest capacity as James Tiberius Kirk, the Starfleet hero destined to take over command of the Enterprise from Pike several years down the line. We’d also expect more from Gia Sandhu as T’Pring, seeing as season one left her doomed engagement to Spock open-ended. Presumably Dan Jeannotte will similarly be involved as Jim Kirk’s brother, George.

Lastly, despite Chief Engineer Hemmer’s heroic yet tragic death in episode nine, Bruce Horak has confirmed that he will be back in season two, with producer Davey Perez indicating that he’ll feature as a totally different character — likely one not involving prosthetics and heavy make-up this time.

Like season one before it, SNW‘s second season will consist of 10 episodes that will be mostly standalone while also furthering ongoing character and story arcs. As for specific plotlines we might see, it’s obviously too early for much to have been revealed, but the finale’s shocking cliffhanger gives us a big clue as to how the season will kick off.

The season ender left off with Una’s Illyrian heritage finally being discovered, leading to her arrest by Starfleet. Pike’s clearly not going to accept this fate for his Number One, though, and will no doubt lead some kind of daring rescue mission in the season two opener. This will feed into Pike’s new outlook, after his time-travelling adventure in episode 10. Mount has promised that Pike will be more “resolute” and have more “freedom” in season two.

As the Kirk we met in the season one finale was from the future, Wesley will get to play a less fully-formed version of James T. next time. That said, we can also expect the legendary bromance between Kirk and Spock to blossom, according to Wesley. EP Henry Alonso Myers has similarly teased more TOS characters appearing, though he neglected to specify who they might be.

When will it be released?

As said above, SNW season two is already in the can and, at the time of writing, the post-production phase of the process has no doubt just begun. But while the episodes might be screen-ready in just a few months, Paramount Plus has yet to give us any indication of when we might be able to expect the Enterprise to return to our screens for further voyages.

The obvious inference to make would be that, with season one debuting this May, SNW season two will likewise follow in May 2023. This would fit with both seasons of Picard to date releasing in March. However, fellow sister show Discovery has had a much more random release pattern — season three, for instance, wrapped up in 2021 and season four began later that same year. So it’s just possible that SNW could return in late 2022. Especially as it’s been such a hit and Paramount will want to keep people satisfied.

That said, the streamer’s schedules are full up with Trek content as it is, with more from DIS, PIC, and Lower Decks and Prodigy on the way. Whenever new episodes might follow, at least we can rest easy knowing that — with season three already being teased — it looks like Star Trek: Strange New Worlds will live long and prosper for many years to come.