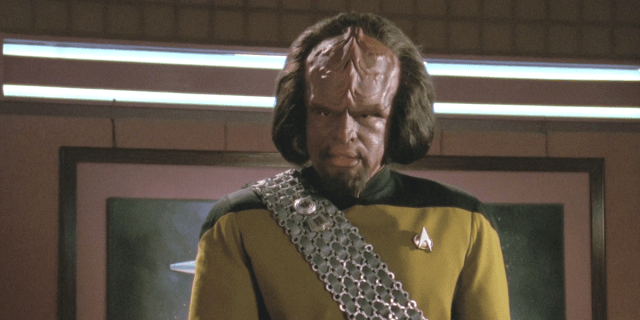 Worf is one of the stand-out characters of Star Trek: The Next Generation. Fans loved Michael Dorn’s performance so much that Worf was brought over into Deep Space 9 starting in season four, making him one of the most prominent characters in the entire Star Trek franchise.

In many ways, Worf is the perfect Klingon. Raised in Federation space with no other Klingons to relate to, Worf was forced to learn about his ancestors through the epic stories of Kahless and other Klingon heroes.

Worf always follows the honorable path, but is not afraid to break with Klingon tradition when he believes it is the right thing to do. With Dorn reprising his iconic role in Picard: Season 3, we can look forward to more great Worf moments. For now though, here are his best outings to date.

This was the first true Worf episode. Coming in the latter half of Next Generation season one, “Heart of Glory” sees the Enterprise rescue a party of three Klingons who are fighting a personal war against the Klingon Empire, which they believe has become weak. They chide Worf for his “soft” Starfleet ways and try to convince him to join them. Worf is tempted and must decide where his place is. The episode has a solid ending with the fate of the ship hanging in the balance. It also features Worf screaming out his first Klingon battle cry — warning the dead that a true warrior is about to join them.

“Parallels” is a weird science episode where time has gone wildly out of sync. Worf accidentally pilots his shuttlecraft through a quantum fissure and returns to an Enterprise split into alternate realities. He attends his birthday party more than once, sees friends disappear, and even gets a massage from his girlfriend Deanna Troi. “Parallels” also includes a scene where multiple Enterprises have appeared in the same universe and the classic line, “Captain, we’re receiving 285,000 hails.”

“New Ground” is an important episode that develops Worf’s parenting skills. Worf’s son Alexander has come to live on the Enterprise and is making mischief. Worf clashes with Alexander’s teacher and is horrified to learn that his son is a thief. The pair argue and Worf is left to decide what to do with the boy. Klingon tradition would have him go to a military boarding school to learn the art of combat. Worf again does the right thing by letting his son face the “greater challenge” of staying on the Enterprise.

“Sins of the Father” sheds light on the internal politics of the Klingon Empire. Worf and Picard become embroiled in the dark world of the High Council, foiling assassins sent by Worf’s enemy, Duras. Worf finally accepts discommendation (the ritual stripping away of his family honor) to preserve peace and unity in the Empire. By doing this, Worf shows the incredible courage that marks his character. “Sins of the Father” also develops the close relationship between Worf and Picard, and lays the groundwork for the discommendation arc.

Fans were ecstatic when season four of DS9 opened with Worf making his first appearance in the show. “The Way of the Warrior” is a great two-parter, featuring some epic action scenes as we see the crew and civilians of Deep Space 9 repel a Klingon attack. True to form, Worf does the right thing, siding with the Federation against the Klingon Chancellor Gowron, leading to him being stripped of his family honor for the second time.

5. ‘Once More Unto the Breach‘

Veteran actor John Colicos, who portrayed the enigmatic Kor in the Original Series episode “Errand of Mercy,” appears on DS9 in the middle of the Dominion War, desperate to die in battle rather than in bed. In Kor, Worf is faced with a possible vision of his future: an aging warrior who will soon be too old to fight. Kor sums up the intent of the episode perfectly with the line, “Savor the fruit of life, my young friends. It has a sweet taste when it’s fresh from the vine. But don’t live too long … The taste turns bitter … after a time.”

Not to be confused with the DS9 episode of a similar name, “The Emissary” sees Worf fall in love with the beautiful K’Ehleyr (played brilliantly by Suzie Plakson). Their relationship becomes close, and after making love, Worf proposes marriage according to Klingon tradition. The episode has many memorable scenes, including Worf masquerading as captain of the Enterprise to fool a group of rogue Klingons. When asked by Riker how he liked his first command, Worf replies, “… Comfortable chair.” It is the final moments, in which Worf tells a departing K’Ehleyr just how much he loves her, that makes the episode special.

This always makes the top 10 lists of DS9 episodes, combining romance and comedy in equal measure. Worf is finally getting married to the lovely Jadzia Dax, and he’s having a bachelor party to celebrate. But Klingon bachelor parties go on for days and are more about pain than pleasure, as his friends Bashir and O’Brien soon discover. The mantra that keeps them going through the torture (“Kill Worf … kill Worf”), complete with them getting revenge at the wedding ceremony, are some of the standout comedy moments of the series.

Worf suffers the ultimate humiliation for a Klingon warrior — losing his ability to fight. His spine is badly injured during an accident in the cargo bay, and he is left unable to walk. This episode shows how much the character has grown during the series. Initially, Worf asks his friend Commander Riker to help him commit ritual suicide, deemed the “honorable” course of action for an injured Klingon warrior. Ultimately, Worf realizes that the right thing to do is to remain alive and keep being a father to Alexander. Ethics features a great scene where the injured Worf forces himself to stand before seeing his son.

Reunion sees the return of K’Ehleyr, this time bringing along her and Worf’s son, Alexander. After chiding him with the line, “Not even a bite on the cheek for old time’s sake?” they get down to the serious business of deciding what should be done about raising their son. All is torn apart when Duras murders K’Ehleyr. In one of the most dramatic and shocking moments in all of Star Trek, Worf puts aside Starfleet ethics to claim the Klingon right of vengeance, brutally killing Duras with a bat’leth after a brief fight. “Reunion” is one of the few times Worf places Klingon ideals over Federation principles.