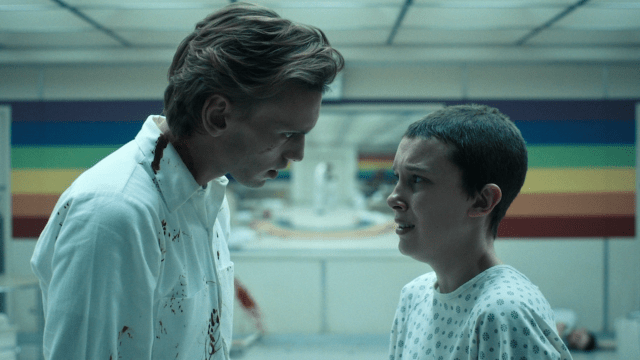 The end is just around the corner. After the seven-part first volume debuted in late May, Stranger Things 4 volume two finally blasts onto Netflix at the end of this week. “Chapter Seven” couldn’t have ended on a more dramatic note, with the true origins of Vecna revealed, so the stage is set for a shocking, high-stakes climax in the season’s final two episodes.

And before they get here this Friday, Netflix has dropped a new poster that tees up the fierce face-off that’s to come between the Monster Formally Known as Henry Creel (Jamie Campbell Bower) and Eleven (Millie Bobby Brown). With the two old enemies engaged in a particularly heated staring contest in the foreground, the rest of the gang — including Max (Sadie Sink), Lucas (Caleb McLaughlin), and Steve (Joe Keery) — are showcased in the background, split between Hawkins and the Upside Down.

Check out the gorgeous poster below:

At this point, we know all about how Vecna is really Creel’s son, aka One, the first kid with superpowers in Hawkins, but there’s much still to be revealed in volume two. Including how exactly the Freddy Krueger wannabe connects to the Mind Flayer and how Eleven created the Upside Down (assuming she did). There’s also the small matter of finding out which characters will make it into season five alive.

With episode eight clocking in at around 1 hour, 25 minutes, and episode nine standing longer than most Marvel blockbusters at 2 hours, 20, there is plenty more content still to come of Stranger Things 4. And fans might want to relish these almost four hours spent with their favorite characters as we’ve no doubt got another long drought ahead of us before the fifth and final season gets here.

Don’t miss the culmination of Stranger Things 4 when new episodes arrive this July 1 on Netflix.