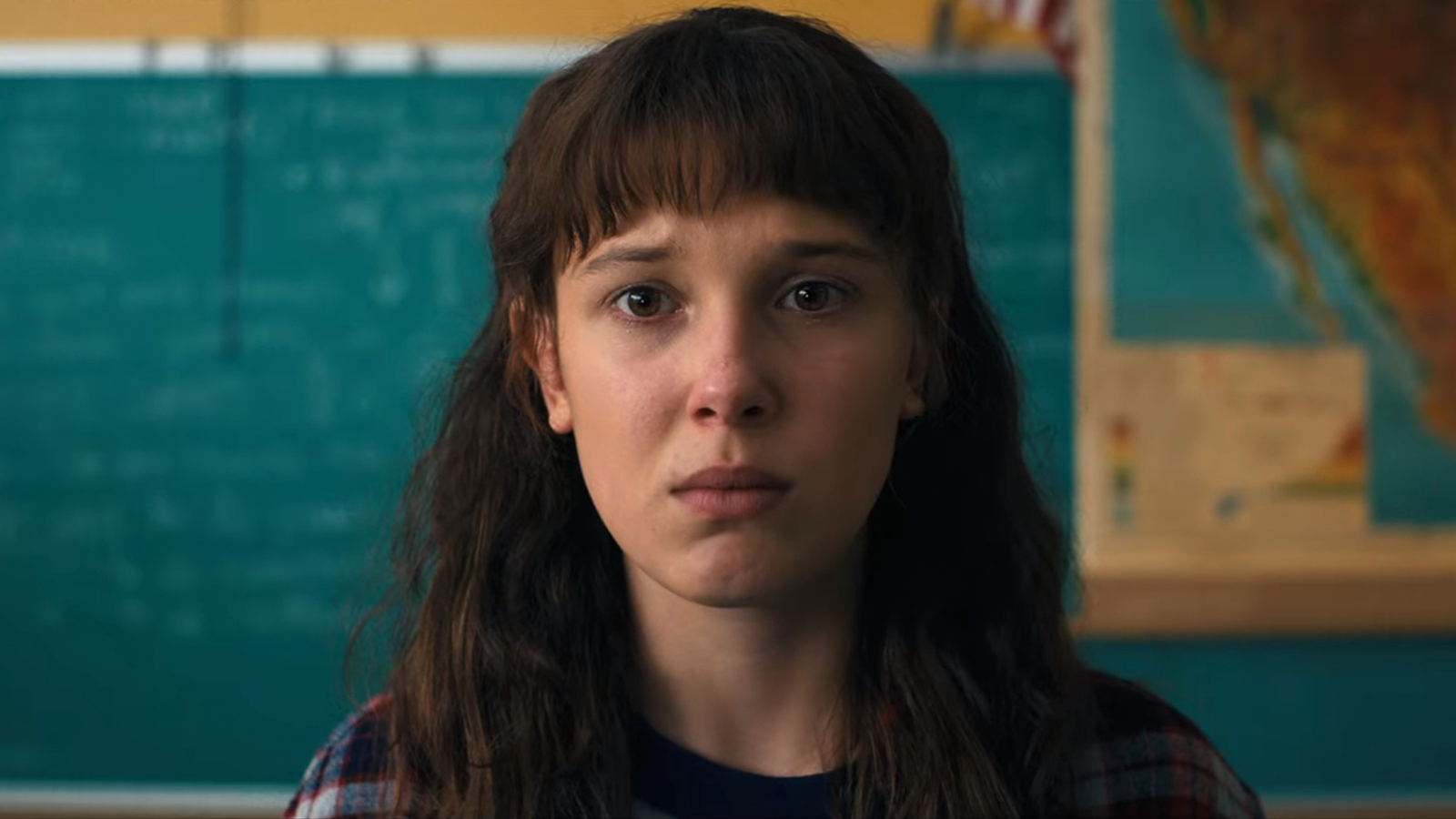 Netflix’s biggest show is back — and damn, does the Stranger Things season four opener leave you hanging there with your eyes on the floor.

There’s a lot to unpack in this over-hour-long episode. From punk rock Dungeons and Dragons to satanic deaths by the slimy Boogieman, here’s what you missed from the season four premiere of Stranger Things, “The Hellfire Club”

The ep opens with a flashback to the testing lab where Eleven (Millie Bobby Brown) grew up. Dr. Martin Brenner (Matthew Modine) is testing one of the other kids on their telepathic ability. The child then says he hears the other children screaming. Eleven brutally murders all the other children and scientists but Dr. Brenner in the facility. It’s a really distressing scene and sets the tone for some of the later parts of the episode and perhaps even the rest of the season.

We then cut to Eleven and the Byers in the present day 8 years later. Eleven, Will (Noah Schnapp), Joyce (Winona Ryder) and Jonathan (Charlie Heaton) are trying to readjust to their new life in California. Eleven, going by the pseudonym Jane, is struggling being apart from Mike. It’s been nearly 200 days since they saw each other but the pair are excited to reunite when he comes up to visit her and Will for a week during their Spring break.

Eleven writes a letter to Mike, telling him she has to prepare a presentation for school on a historical figure. She decides to do hers on her “dad” Hopper (David Harbour) who’s still missing. To tie this all together, Eleven creates a cute diorama of their cabin in the woods together from season two — almost a certainty to be turned into legitimate merch by the time the season finishes. Hurray for capitalism!

Things take a heartbreaking turn when her classmate and bully Angela (Elodie Grace Orkin) interrupts her presentation, tripping her after class while she’s holding her diorama. A fairly pissed off Eleven then tries to use her powers on Angela only to remember she lost them at the end of season three. So Eleven turns to plan B: screaming at Angela in public, making the other kids at school laugh at her more and permanently painting Eleven as the quirky, weird one. Poor girl. She runs away in tears to Kate Bush’s “Running Up That Hill” because telepathy is basically like magic.

But after that horrific season four opener, maybe it’s a good thing Eleven didn’t have her powers here.

Everyone’s favourite superstitious mum Joyce gives 2020 energy and starts a new job working from home. She then receives a strange package covered in Soviet Union stamps. Inside is a creepy red wooden babushka doll from an anonymous person. Honey, if I had a dollar…

Thinking it’s a threat from the Russians or a message about Hopper, she calls resident conspiracy theorist Murray (Brett Gelman) for advice. Murray suggests she smashes the doll open because it could be bugged with a recording device.

She drops a bucket of paint on it and finds a cryptic note that gives strong serial killer art project vibes.

We get a hint at two possible queer love stories preparing to bloom. Robin (Maya Hawke) is now part of the Hawkins High School marching band and crushing hard on her potentially queer bandmate Vickie (Amybeth McNulty). Will they or won’t they? Try “are they or aren’t they”. Best guy Steve (Joe Keery) tells Robin he’s certain Robin has a shot and Vickie’s queer because she paused a show at the exact same time as them to see some “boobies”. Thanks, Steve. Appreciate your input, bud.

Eleven meanwhile tells Mike in her letter that Will has been acting “weird”. She reckons he fancies a girl at school but we later see him physically repel when a girl in his class rubs her feet against his. Eleven also notes Will has been painting something in his room but doesn’t want to show her. I hope it’s not a painting of Mike because, well, yikes. That’s an awkward conversation to have at the Byers family dinner table.

Mike, Dustin and Lucas are part of a metal Dungeons and Dragons club at school called The Hellfire Club. It’s a sick club run by handsomely chaotic senior student and dungeon master Eddie (Joseph Quinn). They even have shirts! Side note: drop the link, kings. I need one for Halloween this year.

The Hellfire Club is holding a session after school. But Lucas, who now plays for the school’s basketball team, wants to bail on them so he can compete in the basketball championships and climb the social ladder at school. So Mike and Dustin try to find someone to replace him and turn to his 11-year-old sassy sis Erica (Priah Ferguson). She tells the party she’s an experienced player — a level 14 chaotic good, half-elf rogue to be precise.

The group fight a one-eyed villain as Lucas dribbles some balls on the court. Robin (Maya Hawke) is part of the school’s marching band and also there, crushing hard on Vickie.

Best guy Steve (Joe Keery) is also there for Robin as wingman support. He brings a new girl he’s seeing then instantly regrets bringing her when he realises they have nothing in common.

Don’t do drugs, kids, or you’ll go to Hell and meet the slimy Boogieman

In the latest edition of *pretends to be shocked*, we learn Max still isn’t doing OK after seeing her brother get possessed and stabbed by a demon tentacle. She’s failing school, avoiding her school counsellor and friends and split up with Lucas. Her mum is working two jobs and excessively drinking at home.

But Max still has a good conscience. She hears new character and head cheerleader Chrissy (Grace Van Dien) throwing up in a cubicle in the school bathrooms and asks if she’s okay. Chrissy tells her she’s fine and asks her to leave. Chrissy then hears the voice of her mum aggressively calling for her as ~something~ violently bangs on the cubicle door.

Thinking she’s going insane she tries to buy some special something from Eddie in the woods behind school which honestly checks out. But while she’s waiting she sees a broken clock in a tree. The alarm goes off and a horrifying cluster of black spiders climb out of the crack in the clock glass.

She then goes home with Eddie who lives next door to Max in a caravan park. She suddenly hallucinates and sees her mum in front of the sewing machine. But when she walks over to her, she sees her mum’s eyes and mouth have been bloodily sewn up. Damn, we know who’s not winning this week’s sewing challenge on All Stars 7.

As she runs away from her mum-turned-human-taxidermy, she finds her dad met the same fate and is sewn to the couch. A human-looking creature slowly chases after her. We don’t know his name so for now I’m gonna call him slimy Spider-Boogieman. Chrissy flees to the dining room and finds more clusters of spiders swarming plates of rotten, mouldy food like a scene out of Resident Evil 7.

We then cut back to the real world where Eddie is freaking out. Chrissy is standing there unconscious, eyes blinking furiously before he’d even given her anything. Spider-Boogieman then kills her in what looks like the Upside Down and her real body is flung to the ceiling. Her bones then crack and turn backwards, and her eyes pop out of her head.

Stranger Things is available to stream on Netflix. The first seven episodes of the new season are out now, with the remaining two chunkier eps will drop on Friday, July 1st.