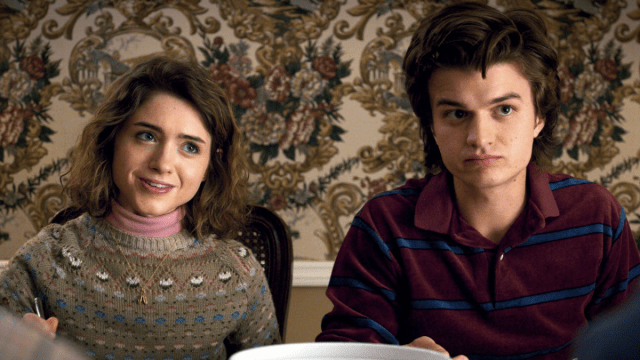 The love life of Nancy Wheeler has been a hot topic for discussion among Stranger Things fans for some time, and actor Natalia Dyer took time out to share her take on the topic.

“Chapter Nine: The Piggyback” of season 4 saw Steve Harrington (Joe Keery) seize on the fragility of Nancy’s long-distance relationship with her boyfriend Jonathan Byers (Charlie Heaton), and confess to that he still cared for her.

Per Collider, Dyer opened up about whether Steve shooting his shot with Nancy meant that the love triangle between the three teens was back in play, or if the she believed something else might be in store for her character, and she was amused that people were still intrigued.

“In the world of our characters, the world is potentially gonna end and they just had this giant rift thing, and they just narrowly escaped death again. I don’t know! I don’t know. Who’s to say who she’s gonna end up with? It’s a really funny thing, but I like that it interests people still.”

She emphasized that Nancy and Jonathan shared a strong connection shaped by their feelings of isolation, as well as their shared experiences of adversity.

“For Nancy and Jonathan, I think they’ve really bonded through this sort of outsiderness […] I think for them, Season 1 they really bonded over this sense of thinking differently than everybody else and I think they sort of helped each other open up. I think there’s a deep bond in the things that they’ve been through together. You know, that shared trauma thing. I think this season he’s really surprised Nancy.

These are two characters who haven’t seen each other in a while and I think there was always warmth from Steve and love, and there was a balance, you know, she’s the smart girl and he’s like the jock guy and there’s something about that dynamic that works in a way. But I think he’s really grown up and I think that impresses her a lot this season. He’s grown up, he’s kind of come to terms with things, and he also cares deeply and is brave, and I think that’s something that she aligns with as well.”

Dyer remained coy about who she thought Nancy would end up with, though, but she did go out on a limb and give her take on what lies at the core of her character’s attraction to Jonathan and Steve respectively.

“I don’t know, maybe I’ll get in trouble for saying this, with Jonathan maybe it’s more of the caretaker and I think maybe she thinks Steve is a little more care-taking. I don’t know. It’s a funny thing, especially for someone who’s so gung-ho and kind of controlling sometimes.”

Nevertheless, Dyer said she thought it might be refreshing to see Nancy focus on herself instead of centering her life around a high school romance. It remains to be seen how things will play out for the famously studious teenager.