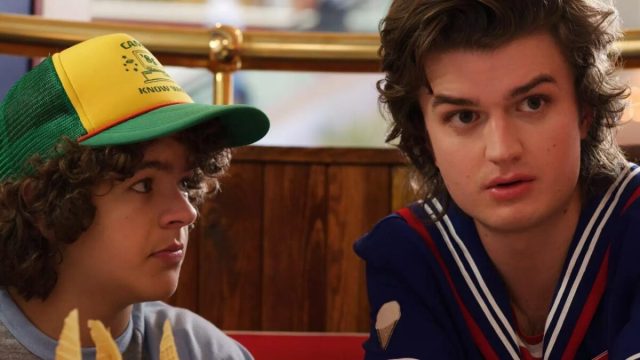 Stranger Things fans can’t imagine a show without Joe Keery as Steve Harrington, but that very well could have happened. Steve was Nancy’s jerk boyfriend and overall bully in the beginning who transforms over the past four seasons into a full-fledged hero alongside the kids of Hawkins who fight the monsters from the Upside Down. He’s now a fan favorite character and an essential part of the Stranger Things legacy.

In an interview on The Tonight Show Starring Jimmy Fallon, Keery told the host what it was like working on season one and how it was more of a “day-to-day” situation.

“Yeah, the [Duffer] brothers wrote, you know — I read one, maybe two episodes, and it was kind of like, we read three episodes, and then they had two more and stuff. So it was really, they were building as they were going.”

Steve could’ve easily remained the stereotypical ’80s antagonistic boyfriend who doesn’t learn his lesson and leaves the show, but he made such an indelible mark that the Duffer brothers decided to keep him around. He represents the potential for people to have a change of heart and do what’s right rather than fall victim to their insecurities, and as Hawkins resident “babysitter” looking after the younger kids on their supernatural adventures, he’s more than made up for his past.

Executive producer Shawn Levy even went as far as saying he liked the character so much that he’d quit if he were ever killed off. His appreciation of the character extends to the actor, since he cast Keery in the extremely popular video game adventure movie Free Guy as the programmer Keys.

Steve isn’t the only character who’s taken off in the series. The season four villain Vecna has taken off thanks to the masterful performance by Jamie Campbell Bower. Behind-the-scenes footage shows more details about Vecna and the process of bringing the monster to life, and it’s easy to see why the series received a 2022 Emmy nomination for best production design.