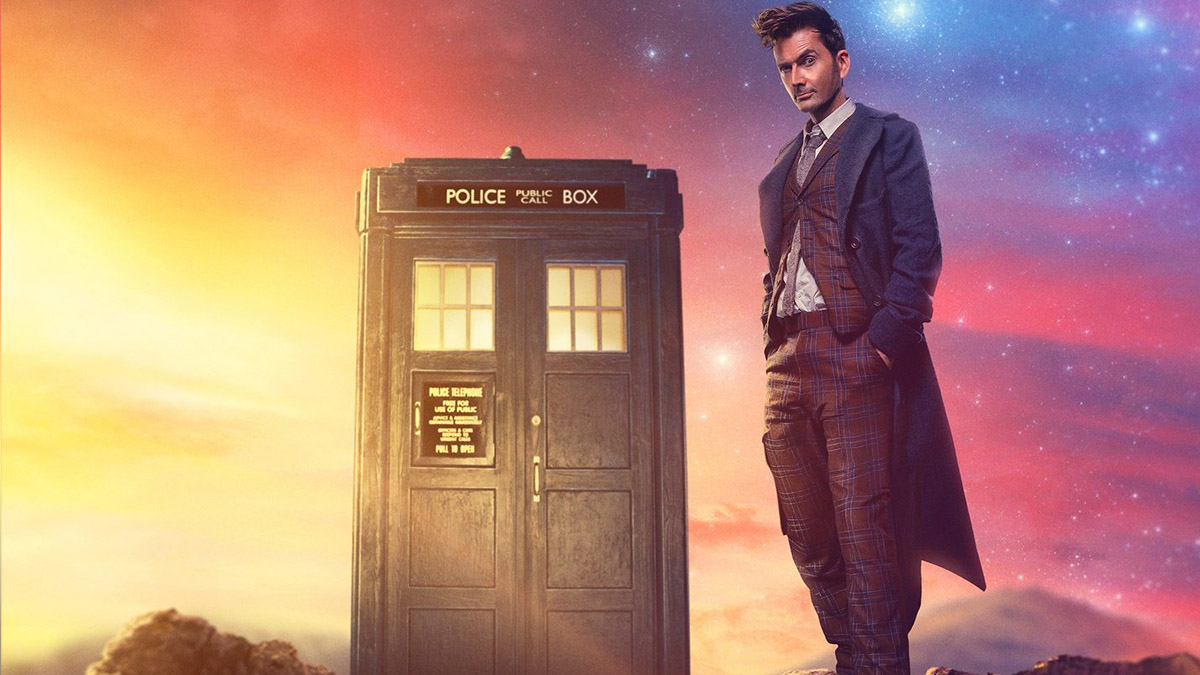 Anniversary years are always big news for Doctor Who fans, and the show’s 60th is set to be the biggest yet.

We have a new logo, a new Doctor, a new companion, and the show itself is well and truly in production under a new co-production deal between Disney Plus and the BBC. While the current iteration of Doctor Who is looking stronger than ever, many multimedia projects will pay tribute to the show’s immense history. Familiar faces are returning and so are the monsters. The Fifteenth Doctor may wonder, “what the Hell is going on?” but you’ll be up to speed with our 2023 round-up.

They are going to be both strangely familiar yet new and different at the same time. 2022 set up one of the show’s great mysteries as Thirteenth Doctor Jodie Whitaker regenerated into… David Tennant. But this isn’t the Tenth Doctor. No, this is the Fourteenth Doctor, and the mystery behind that ever-so-familiar face will be the cornerstone of the 60th celebrations, with three specials airing in the anniversary month.

Veteran Marvel writer Dan Slott has never hidden his appreciation for the world’s longest-running sci-fi show. In the anniversary year, he finally gets to put his passion into words as he will be penning three specials for Titan Comics, the first of which features the Tenth Doctor and Martha Jones. These much-anticipated comics were announced two years ago but their ultimate release has been saved for the anniversary peak this autumn when Tenant is back on the screen.

A Once and Future celebration

Big Finish Productions’ audio plays have been a crucial part of Doctor Who for two decades. They know the show in and out, so there’s no chance they’d miss an anniversary. Thus, they’re planning their biggest storyline for the Doctor’s 60th birthday.

A seven-part series will be released on a monthly basis between May and October 2023, with an intriguing coda scheduled for November 2024.

The story promises a multi-Doctor romp like no other, as severe injury causes the Doctor to start degenerating in the middle of the Time War. What could be behind the Doctor’s leaps between previous generations during his anniversary year?

Big Finish has been running a successful audio series of Doctor Who adult spin-off Torchwood for many years, but Eve Myles’ Gwen Cooper hasn’t appeared for three. The Among Us box sets that will be released in May will put that right in an action-packed collection.

With the Torchwood team on the run, Gwen and her husband Rhys find themselves stepping on trouble everywhere they go, whether it is a housing estate where everyone’s gone mad, an industrial estate interrogation facility, or an Icelandic lighthouse.

Rani’s return and back to Class

Torchwood isn’t Doctor Who’s only spin-off joining the 2023 celebrations. The much-missed Sarah Jane Adventures is getting a new lease of life in April when Big Finish release Rani Takes on the World: Beyond Bannerman Road. Anjli Mohindra returns to the Whoniverse — last seen as the villainous Queen of the Skithra in Series 12’s Nikola Tesla’s Night of Terror — as Rani Chandra. Having taken Sarah Jane’s lead and become a successful journalist, Rani reunites with old friend Clyde Langer (Daniel Anthony) when a flying saucer heralds the destruction of London.

The unluckiest Doctor Who spin-off of the modern era will also be present and correct in 2023. The somewhat awkward YA spin-off Class was canceled after just one season but has continued on audio, thanks to Big Finish.

Taking the lead from the Torchwood character-based audio series, Secret Diary of a Rhodian Prince will focus on Greg Austin’s undercover alien Charlie Smith, whose life gets even more complicated when his diary falls into the wrong hands.

Doctor Who’s home media schedule is a closely guarded secret, but we can make some informed guesses about what to expect this year. Here are the latest rumors.

In recent years, limited edition, beautifully boxed collections of Doctor Who’s classic series have arrived on shelves two or three times a year. After COVID-19 disrupted the incredible extras that come with these sets, there’s a strong sense that Season 20, including the feature-length 20th-anniversary special The Five Doctors, will be released in the 60th anniversary year. At the moment, a standard issue release of Season 24 (the Seventh Doctor’s first series) is the only classic series blu-ray on the books.

The BBC has been stealthily releasing animated serials to boost classic seasons with episodes lost from the archive. Like the Eleventh Doctor erasing himself from time, the best way to predict future releases is to look at the gaps in seasons that could form future Blu-ray collection releases. Rumors suggest front runners for release are the First Doctor’s penultimate story, The Smugglers (completely missing from the archive), and the Second Doctor’s third adventure, The Underwater Menace (which has two out of four episodes missing).

Given that it’s the show’s 60th anniversary, we’ll be surprised if some pristine HD versions of this year’s anniversary special episodes aren’t boxed up and available in time for Christmas.

The New Series is expanding

The New Series has thrown up spectacular versions of key characters that could never enjoy enough screen time. Fortunately, Big Finish is there again, with box sets lined up to continue the adventures of both Sasha Dhawan’s Master and Jo Martin’s Fugitive Doctor.

There are plenty of backstories to be explored. Just what did the Master get up to when he was stranded on 20th-century Earth, dodging his other selves and past incarnations of the Doctor? What missions did the Time Lords think the flamboyant gun-toting Doctor could solve in the Dark Times?

The famous TARGET imprint is ready with fresh adaptations of TV stories. TV writer Phil Ford will bring the epic Tenth Doctor special Waters of Mars to the page while Keith Temple pens Planet of the Ood.

The most recent Doctors are represented in the novels. Pete McTighe has adapted his Kerblam! episode while Peter Harness has slimmed his Twelfth Doctor Zygon two-parter into The Zygon Invasion.

A highlight will be Stephen Gallagher’s adaptation of the metaphysical late-Fourth Doctor serial Warriors’ Gate, increasingly recognized as a classic despite its ambitions exceeding its studio confines.

Get Lost In Time

You’ll be able to celebrate the rich history of the titular character with the latest Doctor Who mobile game, which pays tribute to every era of the show.

Following on from The Mazes Of Time and Doctor Who: Legacy, Lost In Time will let you interact with Doctors and companions from the show’s history as you uncover a threat to the Doctor’s existence. Eastside Games soft-released the game in 2022, but the full release is in January 2023.

Lost in Time is an idle game where your primary goal is to spend as much time wandering around expanding locations to XP by absorbing vortex energy. It could end up being one of the major ways you waste time in 2023, but every Doctor Who fan out there already knows it will be time well-wasted.

Doctor Who and the Christmas return

Somehow, 2023 is set to end on an even bigger high when we finally travel across time and space with Ncuti Gatwa’s Fifteenth Doctor and Millie Gibson’s Ruby Sunday. The pair will make their first full appearance in a special aired over the 2023 festive period, setting up the fourteenth series that is set to debut in 2024. An anniversary and a new era? It’s looking like the perfect year for the show that’s all about the past and future.