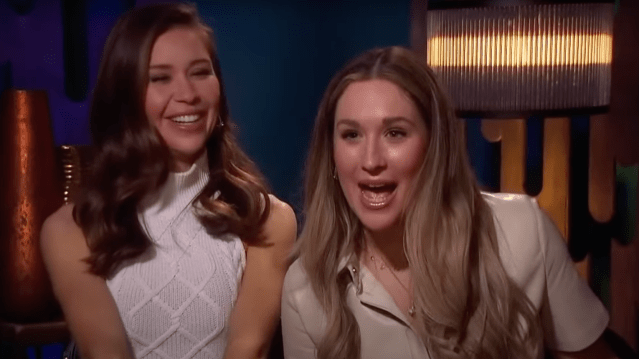 Rachel Recchia and Gabby Windey have donned their white dresses, passed out their final roses, and accepted proposals from the winners of The Bachelorette season 19. That’s right, the most dramatic season of The Bachelorette has officially wrapped, and Erich Schwer and Tino Franco won the hearts of the two bachelorettes.

However, the viewers of this season of The Bachelorette are the real winners. Yes, we love the drama, and we tune in season after season to see it unfold, but this time, it has been a complicated watch. After weeks of finale episodes, fights, and arguments before painful goodbyes — with one of the wrong guys pulling the wool over Rachel’s eyes — the smoke has finally cleared, and we are on the other side.

Leading up to the finale, Gabby had one suitor left, Erich, but that didn’t mean it was all smooth sailing. Erich wanted to keep dating Gabby, but she wished to be engaged by the end of the series, something she hadn’t kept quiet about.

Rachel also hoped for an engagement at the end of the season, which is why she said goodbye to the guy we were all rooting for: Aven. When Aven said he wasn’t sure if he was ready to get engaged but that he still wanted to be with her and work towards that moment, she told him goodbye. That left her with one partner, Tino.

With Neil Lane donating rings to happy couples at the end of the season, marriage is obviously on the agenda, but increasingly, as the show inches toward something in the realm of progress, contestants are finding that six weeks isn’t long enough to get to know someone before getting engaged.

Of course, that doesn’t mean marriage has to happen at the end, but this season had a lot of moments where the men seemed to be ready and ended up dropping the ball right at the end of the series.

Early in the episode, we see a happy Rachel and Gabby — both anticipating their knights in shining armor coming to their rescue. What unfolded over the next three hours was anything but a fairytale. The girls had a sweet moment together where they revealed to one another that they each had one boy left and were so happy for one another. The real MVP of this entire season was the relationship born between Gabby and Rachel.

Rachel and Gabby fell in love, which can’t be contested, and when we saw Tino drop to one knee in front of Rachel, we should have been cheering — so why were we so hesitant? Perhaps because we saw the looks on Rachel’s parents’ faces, and the look on Rachel’s face, and of course, we saw the promo.

When the episode continued, Rachel revealed that Tino cheated on her weeks after their engagement and that it broke her heart. She shared they had typical difficulties as their relationship went from the show to their real lives, but she wanted to work through it together. Viewers were then shown a conversation where Rachel and Gabby talked, and they tried to make sense of Tino’s choices.

One of the appalling things Tino said, other than the cheating confession, was that he didn’t want Rachel to tell anyone else about it. The couple met up to discuss what happened, but all that ended up coming to fruition was a lot of spinning circles, and not the romantic kind you enjoy in a ballroom; it was more like the circles that have your head spinning after too many drinks.

When Rachel tried to move the conversation forward, Tino would excuse himself from the room, and we wanted to jump through our screens to hug her. ABC promised the most dramatic season ever, but this was the most dumbfounding conversation to ever play out on the series. She gave him the ring, told him she was done, and Tino excused himself for a final time.

The Bachelorette brought Rachel and Tino back together for a final conversation, and we won’t focus on that. We WILL, however, share that Aven showed up and whisked Rachel away, and we’re now the captains of their ship. Raven? Achel? We’ll figure it out!

The most dramatic exit ever left Gabby to take the stage with Jesse Palmer, and she was thrilled for her friend. She was also ready to take us through the next chapter of her journey.

When we went back to Mexico for their big moment, Gabby poured her heart and soul out to Erich, thanking him for loving her through it all. It was the beautif,ul happily ever after moment we all hoped for.

Erich began to admit that he wasn’t sure if he could measure up to the standard and level that Gabby deserved but quickly said that hhopedes to be that person for her, working for her every day. Que the tears, this is where we all start crying, not to mention sweet Grandpa John in the corner of the screen, tearing up at the happiness his granddaughter found.

So when the camera showed us a live feed of Gabby, the tears in her eyes were alarming. Palmer did warn us that Erich had some explaining to do about leaked texts, but when he took the stage to meet his fiancé, she whispered to him — between lots of kisses — that it would all be okay.

He had to face the texts he sent to an ex, talking about not believing in the show and using it as a platform, and to say that didn’t go over well with Bachelor Nation is an understatement.

Erich told everyone that he was being a coward, using the show as a crutch to let a girl down instead of ending things as a man should. He did admit that he wasn’t sure he’d find love, but as soon as he met Gabby, Erich knew he’d found his match — even if he didn’t expect that going on.

That statement got the approval of Gabby and sweet Grandpa John, but she did call him on his bad decision while commending him for taking accountability for it. You can tell the love they share is deeply rooted; she says they’re working together and getting through challenges.

Erich had another off-camera scandal recently after photos of him wearing blackface for a Jimi Hendrix costume in high school surfaced. The real estate analyst apologized on Instagram, writing, “I am deeply ashamed by my actions and understand that my apology is only the first step in taking accountability.”

This scandal (shockingly!) was not addressed on After the Final Rose, but we can all hope he’s making good on his promise to continue taking accountability.

To leave this season with one couple finding their happily ever after, well, that feels like a marathon win. For Gabby and Erich, though, it was just a 10K.

So give yourself the final rose and cheers to making it through; we’ve crowned the real winners this season, and it is all of us for making it through. Rachel and Gabby — they’re the winners, too, for trusting the journey and following their hearts.

Try and find some peace in your life before Bachelor in Paradise kicks off Sept. 27.