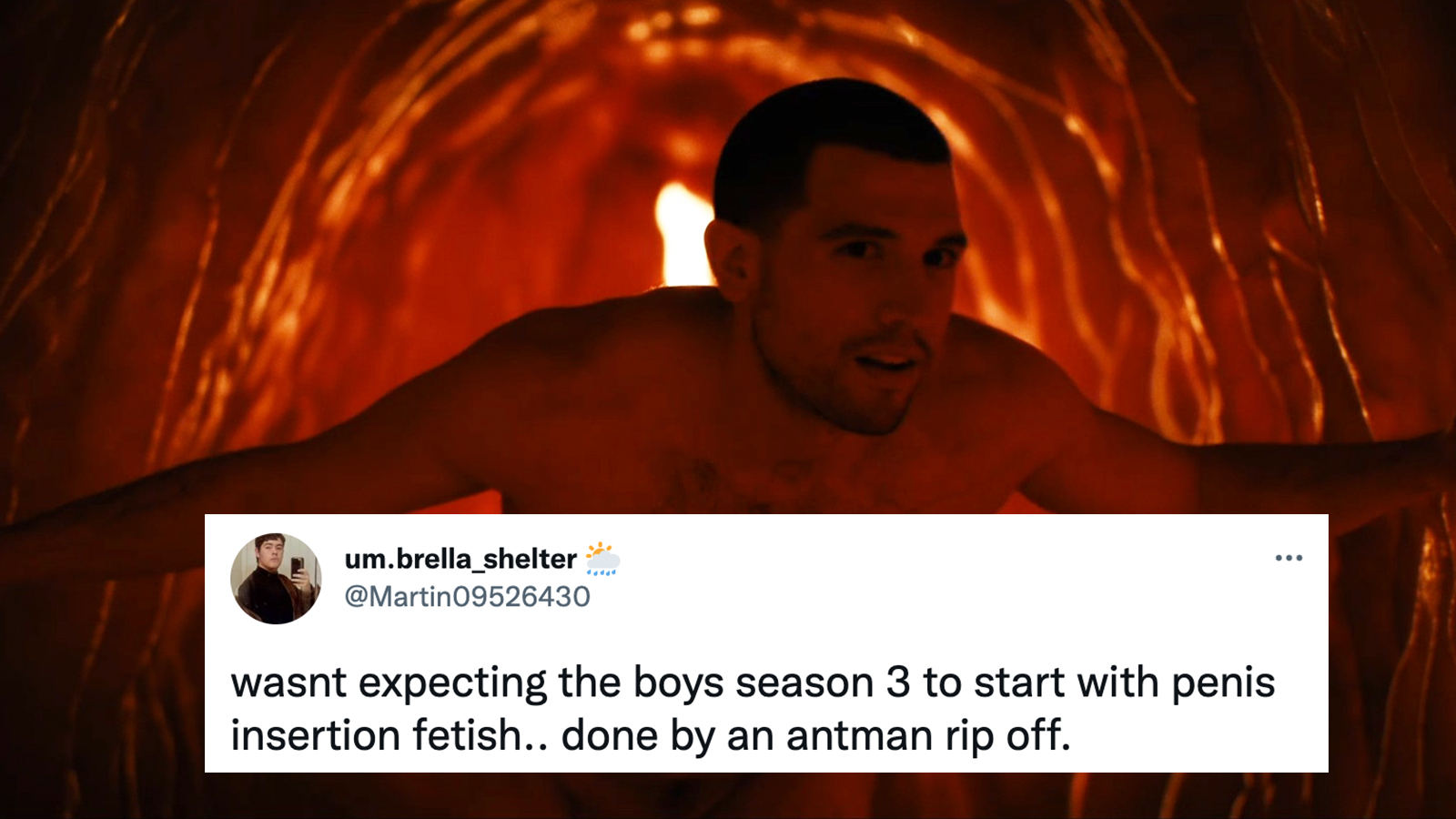 Dear God, I can’t believe I saw this with my own two eyes and now have to curse you all with this information but Amazon’s The Boys just went full “Thanus”. An Ant-Man-like hero legit climbs into another man’s urethra in season three and then accidentally kills the man when he returns to his normal size while inside him.

Someone fetch me a bucket because I feel so sick.

Okay, I’m giving you one final warning here. This scene is NOT for the faint of heart or dick. Did you think the death scenes in Stranger Things season four were hard to watch? Stop reading right now. Or book a therapy sesh. ASAP.

The shocking scene occurs in The Boys season three episode one, “Payback”. We’re introduced to Swatto (Joel Labelle), Garth Ennis’ version of Ant-Man and a queer member of the second-tier superhero group Payback.

Swatto hooks up with another man after performing a naked dance routine at a warehouse bar. He takes the man into his room, does a line of cocaine and leans in for a passionate drug-fuelled kiss. His hookup then says he wants the superpowered artist “inside him”. But I suspect what happens next is not what he was expecting: Swatto miniatures himself and, uhhhh, slides into his urethra like it’s a waterslide. Slip, slop, slap, and all.

Yep, you read that right. He goes *into* the man’s pee-pee hole. The sounding boys just entered the chat, meanwhile the rest of us are bothered, crunchy skinned, sad, out of our lane, unfocused, and absolutely without a doubt not flourishing watching this.

Swatto then walks deeper into the man’s penis hole as his hookup acts more and more aroused. Swatto then feels a sneeze coming and oh no. Oh God, no. Please. Not this. Please. Fuuuuck.

He sneezes and then suddenly grows back to normal while inside him. The man’s entire lower half explodes as his blood and guts are smeared on the walls and all over Swatto’s naked body. His dead upper torso falls on the bed as his organs and guts slide down the bottom of the bed to the floor.

It is so unimaginably fucked that I don’t even think my description and this screenshots truly capture how visually awful and visceral it is. I have never screamed so hard at a TV show in my life. Forget Oberyn Martell or anything from a Quentin Tarantino flick, this is the most brutal and skin-crawling death in the history of cinema. Facts.

Several joked the scene proved Paul Rudd‘s Ant-Man could have annihilated — or rather, “anal-ihilated” — Thanos in Avengers: Endgame. Just slide into Thanos and supersize.

The full disturbing scene and the rest of The Boys season three is available to stream on Prime Video.