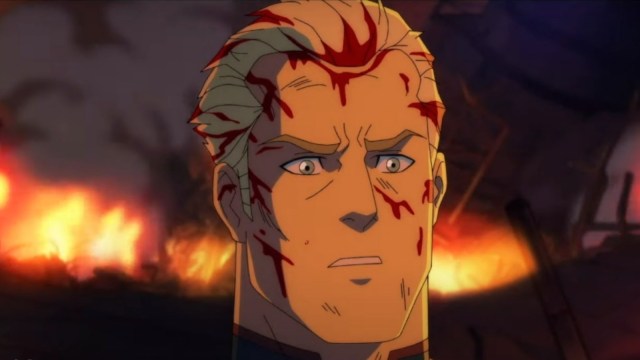 The Boys: Diabolical landed on Amazon last month and proved to be a delicious starter for the main course this summer. The animated anthology is the result of a joined effort by a bunch of different studios and writers, with mini-episodes penned by the likes of Seth Rogen, Rick & Morty‘s Justin Roiland, The Boys comic writer Garth Ennis, and Shang-Chi star Awkwafina.

There was also some serious talent providing voice work, including Don Cheadle, Kumail Nanjiani, Michael Cera, and Christian Slater (among many others). But one especially fun addition was Shaun of the Dead and Star Trek‘s Simon Pegg, who played ‘Lil Hughie’ in the episode “I’m Your Pusher.”

This was a fun nod to the comics as the originally Hughie was visually based on Pegg, though he was too old to play the role when they were making the show (though he appeared as Hughie’s Dad).

Speaking at WonderCon, EP Simon Racioppa said there was no other candidate for the role:

“When we were working on Garth’s episode and we saw that he obviously wanted to put Hughie in it, it had to be Simon Pegg. There was no one else. I think if Simon was unavailable, we would have taken him immediately out of the episode rather than cast someone else in that role.”

Diabolical was very fun, though right now all eyes are on the hotly anticipated third season of the original series, The Boys. We recently got an insane gore-spattered trailer teasing what’s coming this summer, with one interesting development — Karl Urban’s Billy Butcher now has powers of his own. This is likely to cause some friction between him and the rest of the team, as he’s becoming precisely what they all fight against.

The Boys’ third season will premiere on Amazon Prime on June 3.