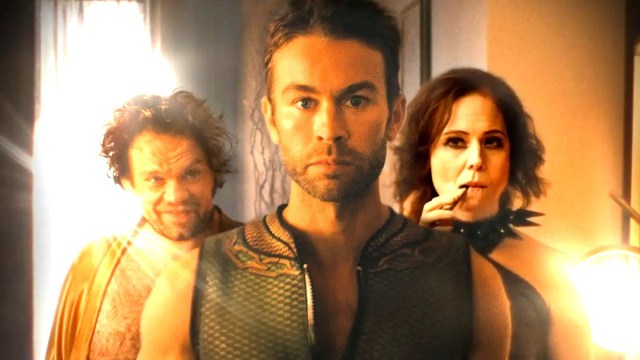 Chace Crawford has DEEP shame around aquariums after his character had sex with an octopus in The Boys.

Following the release of “Herogasm,” the sixth episode of season 3 in which The Deep engages in cephalopod coitus, Crawford joked to ComicBook.com that he “can’t go into [an] aquarium anymore without just hearing so many of the cries.” After a beat (not that kind), he said, “I can see why they’d want to ban me.”

Crawford then speculated how he could appeal the ban by mentioning that it’s not possible to penetrate an octopus the way his character did. How does he know? Showrunner and octopus sex expert Eric Kripke, of course.

“Kripke told me that the scientific thing in play here, like the octopus . . . this is so absurd . . . It’s like a beak. It’s not a real . . . You can’t actually do it, so that’s what would be my sales pitch to get back into the aquarium.”

Octopuses feature prominently in season 3 of The Boys, which can be credited to the 2020 documentary about a human-octopus relationship called My Octopus Teacher. Like many of us while watching the film, Kripke wondered (as retold by Crawford), “Is he going to, like, fuck this octopus?” He doesn’t, so naturally the EP took the idea and worked it into his own project. Despite pushback from the censors, The Boys portrayed the interspecies intercourse in all its grotesque glory with a 40-pound simulated octopus sex rig.

Although you might be banned from aquariums just by association, keep watching The Boys on Amazon Prime Video to see if it can possibly get any wilder.