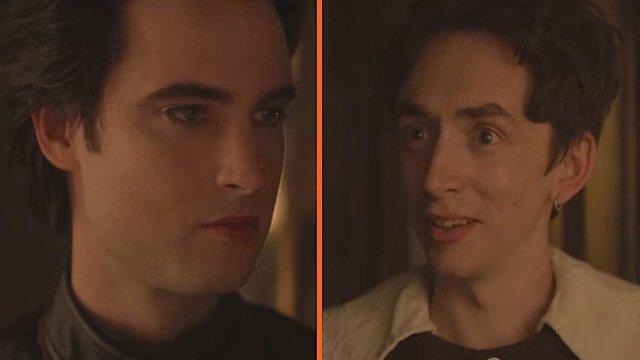 Netflix’s The Sandman, adapted from Neil Gaiman’s comic book series of the same name, introduces many characters throughout its ten episodes — some are purely fictional and some have their existence rooted in mythology. But the sixth episode of the series introduces a character whose name anyone would recognize, even if they are not that into mythology or aren’t ardent fans of the Sandman comic books. The reason? Well, this person has been plucked from the pages of the real world’s history — William Shakespeare, the gifted playwright who has been cleverly molded into the fantastical tale of Dream.

The sixth episode, “The Sound of Her Wings,” offers many other real-life characters like poet Geoffrey Chaucer and Kit Marlowe. But while they simply remain in the background, the character of a young Shakespeare — Will Shaxberg to be precise — leaves behind an impression and more importantly, a curious mystery.

Dream, who had been meeting Hob Gadling every 100 years since 1389, meets him for the third time in 1589. While Hob is busy flaunting his lavish and comfortable life, Dream is distracted by the enthusiastically verbalized aspirations of a young lad in the bar who is proclaiming that he would bargain with the Devil to write like his companion — Kit Marlowe. He wishes to “give men dreams that would last long after I’m dead. I would bargain like your Faustus for that boon.”

Intrigued by his admission, Dream inquires about him. Hob, who is disgruntled by Dream’s divided attention, shares that this Will Shaxberg acts in plays sometimes and has written a few as well but claims that he is “crap.” But Dream is undeterred as he approaches the young man and offers to fulfill his wish of writing plays that would “create new dreams to spur the minds of men.” As Will is more than willing to live his dream, the duo leaves the tavern to have a talk.

Following this, the next time we hear his name is in 1789 when Hob mentions him as Will Shakespeare and talks about his famous play, King Lear, before attempting to drill Dream about how the once “crappy” writer turned into a great playwright. Did he sell his soul to Dream? While he shoots that possibility down because such a transaction would be too “crude,” the Endless doesn’t deny that he did strike a deal with William Shakespeare.

What were the finer details of this off-screen bargain that gifted Shakespeare with the magic of words? And what did Dream get out of this deal?

The answer can be found in the pages of The Sandman comic books. As the recently debuted season is an almost authentic adaptation of the first two volumes in the comic book series and given the direction the storyline has taken, the next season is expected to be based on the volumes that follow — Dream Country and The Season of Mists, which reveal the details of the deal Shakespeare struck with Dream. And seeing that Shakespeare’s arc was deemed necessary enough to be featured prominently, fans of the show can expect the next season to solve this mystery in probably another flashback.

But in case you are not that well-acquainted with the comic books and have a shaky faith in the possibility of a second season — thanks to Netflix’s hobby of axing shows in their prime — read on.

It is in Dream Country that it is finally confirmed that Shakespeare was given the ability to pen plays that would live on and will be remembered even after his death — exactly what he had wished for. But every deal demands a price and the one Shakespeare eventually pays serves to show the steep cost of taking a shortcut to greatness.

This is explored in issue #19, in the story “A Midsummer’s Night’s Dream” — named after the real play written by the playwright in 1595 — which went on to be the first comic book to win the World Fantasy Award for short fiction in 1991. In the comic book issue, we learn that in exchange for the fulfillment of his wish, Shakespeare has to write and perform two plays for (and about) Morpheus — one at the beginning of his career and another when it is coming to an end. The first is “Midsummer,” which sees Dream inviting faeries as the audience. So, the likes of Puck, Titania, Oberon, etc. — the very characters depicted in the play via human actors — travel through a portal to attend the show.

What price did William Shakespeare pay to get his wishes fulfilled?

During the play, Dream wonders whether Shakespeare will be able to pay the price for the gifts bestowed upon him. Even the Lord of dreams has no idea what fate will take from the playwright in return for the ability he attained — all he knows is that the price will be much bigger than Shakespeare could have anticipated. But Dream is also aware that even if he had shared this important, though vague, piece of information, Shakespeare would have still struck a deal with him as his desire to attain fame and become immortal in the pages of history was his ultimate priority.

It is evident throughout “Midsummer” that Shakespeare’s aspirations have consumed him to the extent where he has no time for his family, especially for his young son, Hamnet. He has no speck of pride or respect when it comes to his father’s reputation as a great playwright as for him Shakespeare is a resounding failure as a father. When he talks about his father during the comic book’s storyline, he mentions how “distant” Shakespeare has become.

“He [his father] doesn’t seem like he’s there anymore. Not really. It’s like he’s somewhere else. Anything that happens he just makes stories out of it. I’m less real to him than any of the characters in his play.”

Shakespeare gets so engrossed in living in his imagination that real life means little to him.

By the time Dream comes back to collect the final demand of their deal — a second play by Shakespeare depicting dreams at the end of his career — the playwright has already paid the steep price the Sandman was fretting about. Hamnet tragically died at the age of 11, possibly due to the bubonic plague.

There are many stories about Shakespeare’s life that can’t be called facts due to the lack of substantial evidence. One such debate is whether he wrote the tragedy Hamlet — whose title is similar to his late son’s name — as a tribute to Hamnet or not. In his fictionalized version of the playwright’s life story, Gaiman keeps this as a fact. This in turn signifies the high cost of Shakespeare’s dreams — never having a loving relationship with his son and only realizing his mistake when it is too late to rectify it.