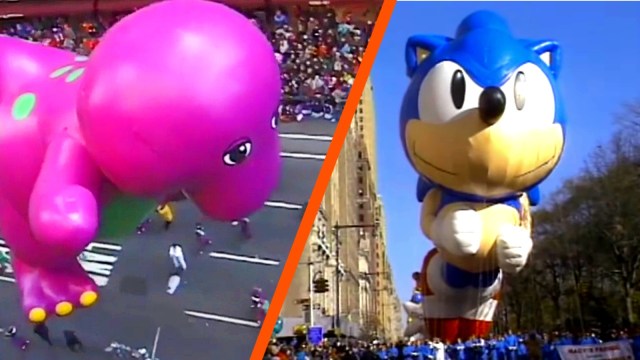 Images via Reddit and ABC7NY. Remix by Danny Peterson.
Review of:

With the annual Macy’s Thanksgiving Day Parade around the corner, let’s count down the top five craziest balloon moments that have popped off throughout the years.

After the end of the 1932 Macy’s Thanksgiving Day Parade, a helium-filled Tom Cat balloon was released into the sky where it met a student pilot’s line of sight. Rather than trying to avoid the floating hazard, Annette Gipson of Brooklyn decided to “fly right into it” 5,000 feet above Jamaica, Queens, as Untapped New York reported.

The result of the attempted stunt was that the plane nearly crashed, as the balloon wrapped around the left wing, causing the aircraft to spiral toward terrestrial territory. Though Gipson quickly turned the engine off so it would not catch fire, she almost fell out of the aircraft entirely at one point when the cabin door abruptly opened. Her foot remaining caught in the aircraft was the only thing that kept her tumbling down to earth and she was able to maneuver herself back onto the plane.

Luckily, there happened to be an instructor pilot on board who switched seats with Gipson, took the reigns of the plane, and negotiated an emergency landing on a nearby field.

Though Gipson and the instructor were found by an investigation to have violated federal aviation rules at the time by attempting a stunt above a heavily populated area, the young student pilot would later become an accomplished pilot.

The very first giant-sized balloon ever fabricated for Macy’s Thanksgiving Day parade met a fiery end after the conclusion of the 1927 annual event. So how did this incident involving the silent-film cartoon icon Felix the Cat occur after the parade was all said and done?

It turns out, it was commonplace back then to actually release the helium-filled balloons into the air when the parade was done. As an added bonus, people who collected the deflated balloons could ship them back to Macy’s, using the address sewn into them, for a $100 gift certificate. So it was like a giant Easter Egg hunt for New York residents six months before the spring holiday.

Unfortunately, Felix’s bounty never got claimed since it floated into some telephone lines and immediately burst into flames. Thankfully, the flames were rapidly put out before they could spread to nearby buildings.

You would think the tradition of releasing balloons was retired right then and there after such a brush with disaster, but it wasn’t until after the near-plane crash from Tom Cat in 1932 that the practice was finally banned.

3. Barney the dinosaur thrashes his way to the afterlife (1997)

Every couple of years, a clip goes viral of Barney the dinosaur thrashing around from high winds and eventually being disemboweled (if balloons had bowels) when it is torn in half during the 1997 Macy’s Thanksgiving Day Parade.

One woman who was among the crowd was quoted by the New York Times as saying, “Barney attacked us.”

The Barney balloon, which landed on top of some of the crowd and workers, was even treated to being stabbed with knives by cops to get him under control. But Barney was not the only balloon to go AWOL on that unforgettable holiday.

2. Sonic the Hedgehog spin-dashes into a lamppost and injures two people (1993)

Four years before high winds wreaked havoc on Barney, The Cat in the Hat, and bystanders, 1993’s Macy’s Thanksgiving Day Parade saw the then-relatively new video game mascot Sonic the Hedgehog commit a kamikaze attack on a lamppost thanks to some strong gusts on what was the debut of the character at the parade.

In eye-popping footage captured by an amateur and later broadcasted by ABC7NY, which was re-uploaded to the news station’s YouTube channel a couple of years back, Sonic can be seen slamming into a lamppost and getting his eye punctured. When the balloon pulled away from the lamp as it was deflating, it dislodged the light itself and metal pieces, which fell and injured a man and a little girl.

During Macy’s Thanksgiving Day Parade 1997, the big purple dinosaur with an appetite for spreading love and hugs was not the only giant balloon to run amok. Indeed, the 43 miles-per-hour winds wreaked havoc on a number of classic cartoon characters and sent them “barreling between buildings as handlers tried to control them along the parade route,” according to the Dallas Observer.

Other characters and mascots to lose control during the parade included the Nestle Quik Bunny, The Pink Panther, and The Cat in the Hat. The iconic Dr. Seuss character caused the metal arm of a lamppost to snap off, hurting four people, according to ABC7NY. Two of those people had to be quickly transported to a hospital for grave head injuries. One woman who was wounded “suffered serious injuries and was in a coma for a month,” according to KTVZ.

Eventually, all the rogue balloons were reigned in by officials who removed them from the parade, sometimes by stomping on them or stabbing them with knives.

Ever since that fateful day, the prospect of high winds has now necessitated a protocol in which some balloons get “grounded” in order to prevent such mishaps. The incident was so bad, then-New York City Mayor Rudy Giuliani even vowed an investigation would take place regarding the parade’s safety protocols.

If that weren’t enough, there have been many other instances of balloons crashing into lampposts at the parade and injuring people, including Rex the Dinosaur in 1993 — on the same day that Sonic the Hedgehog got into similar shenanigans — and an M&Ms balloon that was caught in a nasty gust in 2005, with the lamppost debris it knocked off injuring two sisters, one of whom had to get stitches, according to The Hollywood Reporter.